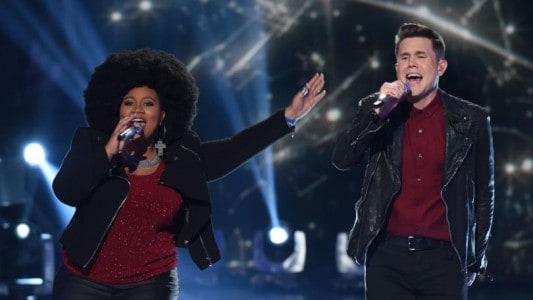 Some people wait a lifetime, for a moment like this. Here we are, 14 years and 15 seasons later… the end of American Idol as we know it. The final farewell is finally upon us, with La’Porsha Renae and Trent Harmon hoping to claim the crown; the bookend to Kelly Clarkson, the original Idol. You may have noticed (or you may not have noticed, too) that I didn’t review last night’s penultimate episode. I whispered a secret to the wind, and the universe heard me and I was given last minute tickets to the Justin Bieber Purpose Tour in Kansas City, not quite three hours from my home. I had to take a side, and the Biebs took precedence over the final Idol showdown. I wasn’t too surprised to see that we lost Dalton Rapattoni last night, and I think a third place finish is probably what’s best for his music career.

Like I did with last year’s finale, I’m going to write my review as the episode unfolds. There will be no rhyme or reason to what comes out of my fingertips, but it’s my final American Idol review, so I’m just gonna go with it. And with that I say, DIM THE LIGHTS! (Oh wait, I jumped the gun… not just yet.)

Â “Not all of us can sing like Kelly Clarkson, but all our voices matter.” ~President Obama

We get an opening with our Commander in Chief, and a message about the importance of voting.

ONE VOICE. Hold up, kids. You can’t get by me with this. I remember the finalists of season two singing this number on their finale night, joined by Kelly Clarkson. I can easily forgive the repeat song choice simply because all of the familiar Idol faces taking the stage for this rendition. This is the goosies of all goosies for me. It’s like a high school reunion, that I wasn’t invited to and had to stay home and watch from the couch. I love the simple white outfits worn by all. (I feel like the show should have crowned the season 15 winner Wednesday night, and let this be solely a farewell celebration.)

THE RETURN OF BRIAN DUNKLEMAN. We are in for a good night if the return of the Dunk is any indication. And an extra six minutes added to the episode, for the results? Good. Hopefully that’s all the time they will devote to the results. I’m far more excited about the farewell celebration than the winner.

IT TAKES TWO. Trent and La’Porsha belt out the same Marvin Gaye song that was performed by Kelly and Justin Guarini on the first season finale. I am a sucker for throwbacks and nostalgia, and I think this is the perfect Throwback Thursday. (And to think, back in season one, we never threw our Thursdays back.)

KARA DIOGUARDI. Yes! I think I am one of the few who liked the addition of Kara as a judge for seasons eight and nine. Tamyra Gray and Jordin Sparks on backup, as she performs? Yes please! (I will fall off my couch and turn the TV off if Bikini Girl shows up, though.)

Justin Guarini joins forces with Jordin Sparks, for her number “No Air.” Season two’s Kimberly Locke crawls from obscurity to perform her long-lost song “Eighth World Wonder.” Tamyra belts out Little Big Town’s “Girl Crush,” and Allison Iraheta steps out from behind the backup mic to take center stage like it’s season eight all over again.

PANTS ON THE GROUND. It wouldn’t be an Idol final if we didn’t get the return of season nine’s Larry Platt, delivering his classic number. (I don’t care that it lasted all of 13 seconds; all that matters is that he’s on that stage.)

Season 10’s Pia Toscano returns to the Idol stage to belt out a Celine song, and elicits a standing ovation from all three judges. (Remember when she was axed and jaws dropped like pants on the ground back in the day?)

KELLY, KELLY, KELLY. I admit I was a bit weary when I was promised on Instagram that Kelly Clarkson would be part of the “live” finale. I mean, she was like nearly 11 months pregnant during her last appearance. Somehow, I was still expecting her to be there. My heart breaks a little to see it’s a pre-recorded bit, but I suppose that’s better than not having her be a part of it at all. She delivers a super-medley of her songs. How fitting that she ends with “A Moment Like This.” Please, can we just crown her again??

URBAN LEGEND. Judge Keith Urban is joined on stage for a performance of a new duet with season four winner, Carrie Underwood. I enjoy Carrie enough, but I think I’m still bitter about Kelly not being there, because I’m not over the moon for this performance. (I do like J.Lo’s Music Box Dancer-inspired outfit of the evening that I just noticed, though.)

SANJAYA IN THE AUDIENCE! Enough said.

A LITTLE BIT COUNTRY. Since when is Diana DeGarmo of season three considered a country artist of Idol? She is joined by Skylar Laine of season 11 and Kree Harrison of season 12, and I honestly have NO idea who those two are. (I did take about a two year nap during the 15 season run.) Bucky Covington and Ace Young, both of season five, join Lauren Alaina and Scotty McCreery, both of season 10, along with season five stand-out, Kellie Pickler. And Constantine has somehow managed to be a little bit country, after being a little bit rock and roll?? (I think he’s being a stage hog.) My big complaint about this part? Not enough Pickler. (Not even close.)

Am I hallucinating, or did season 12 judge Nicki Minaj record a message for the show? (To be fair, her season is one I opted out of, but from what my people told me, I was not expecting her to be a part of this finale in any way. And by the way, ‘my people’ are the pages of US Weekly.)

VIVA LAS VEGAS. Jennifer Lopez brings a piece of the Vegas strip to the Idol stage, and reminds us that Jenny has come a long way from the block. It’s so good to see her out from the judging table, and showing us why she was such a good voice for Idol. (Maybe she can wind up a good idol for the Voice when all this is done?) It’s like Devious Maids Ice Capades, and I love it.

THE 3 DIVAS OF SEASON 3. The return of Jennifer Hudson, Fantasia and LaToya London is a highlight of the night, as their powerhouse ballads are belted to the top of the Dolby Theater. It’s a nice reminder of how much talent has come from American Idol.

SOUL PATROL. Seeing Taylor Hicks perform makes me think I am looking at Trent Harmon in 20 years. (And it kind of gives me whatever the opposite feeling of goosies would be.)

I love the video montage looking back on 15 seasons, as the Idol anthem “Bad Day” by Daniel Powter plays. (And we even get a “Seacrest, Out!”)

THE HOLY TRINITY. Original panel members Randy Jackson and Paula Abdul are on hand to deliver a special gift to Ryan Seacrest, for being the only on-camera personality to be with the show through its entire run. They are all surprised by the sudden appearance of Simon Cowell, and it’s such a fitting moment. Before this, I didn’t really care if these three were a part of the farewell, but seeing them together again on stage, it wouldn’t have been right without them.

SHEBANGS! Just like Larry Platt and his “Pants”, the finale wouldn’t be complete without the return of William Hung.

CARRIE ON. Carrie Underwood returns to the stage for one final reminder of the magic that American Idol can create for someone’s life. Her chill-inducing “Something in the Water” actually gives me shivers.

With all the finale hype, this is why I feel the winner should have been crowned in another episode, with this serving as a tribute episode. Trent and La’Porsha were both overshadowed, and I honestly forgot one of them still had to win it all.

DIM THE LIGHTS. Are you even kidding me? Trent Harmon. America, you have failed me. American Idol, you are dead to me. (…but only until the reboot, probably.)

It’s been a fun ride… and I can’t believe it’s all over.

The winner of season 15 is crowned.