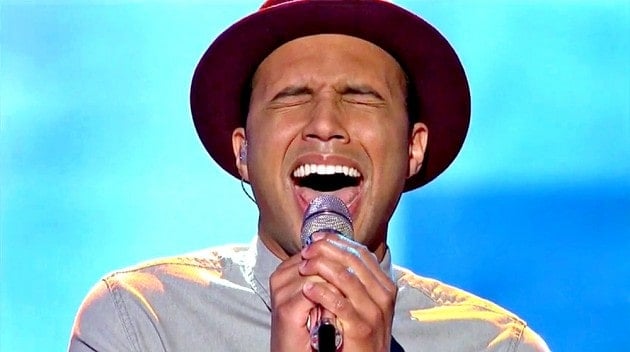 We have returned to Los Angeles, and Ryan Seacrest is wearing a suit jacket. I already don’t feel good about this episode of American Idol. Out of the remaining 16 contestants, five boys and five girls will be given spots in the top 12 based on America’s vote from last week. The final two spots will be chosen by the judges as wild cards. (Jennifer Hudson was once a wild card, just in case you forgot.)

The first name to be called to claim the first spot in the top 12 is Sarina-Joi Crowe. It’s clear that American Idol is getting down to business and not wasting time this year, as she’s 30 seconds into her song before I realize it’s already this week’s live performance. She performs OneRepublic’s “Love Runs Out” and I feel like we’re already on fast-forward.

Rayvon Owen is called and delivers Katy Perry’s “Wide Awake” again, and still has me yawning. I think it’s a lot for these contestants to take in; from finding out they made the cut, to immediately having to take the giant new stage to perform a new song, to trying to appear calm, cool and collected at the same time.

We are now introduced, again, to Scott Borchetta, he of the “rock-star resume” and Taylor Swift-founder. We hear from Steven Tyler, Tim McGraw, Rascal Flatts, Reba, and The Band Perry about how great thou art. The winner of this season will be signed to his Big Machine Label, and he will be mentoring the contestants in the weeks ahead. (I already like him ten times better than Randy “Dawg” Jackson.)

Grabbing the third spot is American Junior Daniel Seavey. He brings us Paula Abdul’s “Straight Up” for the third time. (Seriously?? I loved it the first time, liked it the second, but a third?) Harry calls him “young and inexperienced” and I am suddenly distracted by J.Lo’s witch fingernails that are painted the color of white-out. I wasn’t distracted enough to catch Daniel flub the lyrics, though,Â but the judges didn’t seem to notice. (Am I a Paula Abdul Debut Album Guru? Straight Up.)

FINALLY. The fourth spot goes to Maddie Walker, who brings what I believe to be her best performance thus far. I don’t know the song “Suitcase” by Gwen Sebastian, but it sounds like this could be a debut single from Maddie. Harry calls it a “solid performance” and for me, it’s the best of the night so far. And I am willing to bet her red-tipped extensions on it. (What?)

Maddie doesn’t hold best performance of the night for long, as Tyanna Jones swoops in to claim the fifth spot and that title. She takes flight with Little Mix’s “Wings” and Keith declares “If you move like a star, dress like a star, sing like a star–you’re a star.” And that’s exactly what Tyanna is.

Nick Fradiani and his dimples nab spot number six, and he brings us “In Your Eyes” and it seems familiar. And it just now hits me, more than halfway through the episode, that each contestant is singing the song performed at each individual original audition. (Sorry, Daniel Seavey–now I understand “Straight Up” for the third time.)

Jax brings her bad-girl self into the seventh spot, and I think my brief obsession with her is completely over. She performs “I Wanna Hold Your Hand,” and I think she has proven to be a novelty act, and I just wanna let go. I’m done with the cross-by-the-eye “tattoo” and biker gloves, and it’s time to send her back to the fake motorcycle gang she came from. (The judges disagree with me and love her. Boo.)

Ugh. Where has the excitement gone for my triumphant return to this show? Qaasim Middleton is called for the eight spot, and I am still unimpressed. His over-the-top performances also seem novelty, and I would like to see him just stand still and sing. He doesn’t win bonus points from me by doing a lap around the judges. (I bet you didn’t know I give out points, did you?) Harry echoes my thoughts and wonders if there would be a performance without all the explosive energy. If this were Survivor and my living room were tribal council, I’d be torn whose name to write down to eliminate: Qaasim or Jax.

LUCKY NUMBER NINE!! Clark Beckham, thank you, thank you, thank you. America, I love you. Clark performs “It’s a Man’s, Man’s World” and Jennifer declares he gave the “vocal of the night.” As long as Clark is on this show, all will be right in my universe. (And is it just me, or is he a Chris Pine doppelganger??)

Only one spot left in the top 10 as chosen by America’s vote, and it goes to Joey Cook. Say what you will about her wacky ways, but I find her endearing and I want to cheer for her. She delivers “The King of Spain” and while I wouldn’t declare her the queen of the night, I do think she gives us my favorite performance by her this season. She appears to be in a constant state of shock and disbelief that she’s made it this far, and I hope she can overcome that and realize how good she really is.

America has spoken, and now it’s time for the judges to give the final two spots in the top twelve. Quentin Alexander is called and performs Lorde’s “Royals,” and I actually prefer his version to the original. I’m happy to see him advance. I’m not happy, however, to see Qaasim “Nikki-Jack” the spotlight by rushing the stage to hug him after his performance. (*Nikki-Jack: a term coined by yours truly, referring to the season 1 finale of American Idol, where Nikki McKibbin belted into Kelly Clarkson’s microphone the final line of “A Moment Like This.” Seriously- YouTube it.)

And the final spot in the top 12 goes to… Adanna Duru. After a dramatic sign-of-the-cross thank you, she turns out an unimpressive take on Gaga’s “You and I.” (Why do I feel like such a hater? I promise I don’t hate. Not even tomatoes.) J.Lo thinks she needs to get control of her performance, and I think Qaasim needs to get control of himself and stop trying to upstage everyone. (Yeah, I see you in the background, out of your seat, jumping up and down.)

If we lose Clark, Tyanna, Nick and Joey early, it’s going to be a bumpy ride to the end of the season for me.