I wonder, sometimes, how much there is left of Phillip Jennings.

I wonder how much more this man can take; how many more times he can take a wig off, or swallow his unhappiness, or pull a trigger. Every step he takes is labored; he comes into a room like a dog that knows better. He’s always preferred the States to the Motherland. He’s always been the one that assimilated. But he’s never been afraid to do what had to be done. He’s never worked this hard just to do his job.

We’ve been watching it manifest. His clothes are wrinkled, his hair is wild, he speaks in low monotones. Phillip always looks like he’s one step away from vomiting all over the floor. He’s searching for an identity, for a place to hang his hat; but there isn’t a hook in sight. He’s not Mischa, that’s for damn sure; he’s playing Phil Jennings, which is better, but still performative, and still false. There is no person in that slumping, slouched body; his bent back is carrying the weight of two countries, neither of which he feels loyalty to.

Elizabeth feels it to, that tug to America; it’s hard not to, when the place you come from is cold, and barren, and in a constant state of conflict. But ElizabethÂ isÂ Russian; sheÂ isÂ Nadezhda. She’s suffered untold horrors to get where she is, and she’ll suffer more, because she believes in the cause. Elizabeth wants to break the United States, this is obvious; but her reasons are pure. She wants the world to be a better place. That’s what she hangs her hat on; that internal fire to make a difference allows her to feel enormous guilt, and yet still forceÂ a woman to commit suicide.

That isn’t in Phillip anymore, if it ever really was. There was a episode where we watched Phillip learn how to have sex; this thing that is supposed to be joyous, and a coupling of two people, was reduced to a tool of war. And then he was expected to use those same skills to make a teenage girl fall in love with him. He was taught how to handle people, how to make them feel comfortable; now, he has to use those same skills to make his daughter into an asset. There is nothing in his life this as it seems. There is nothing that he can enjoy.

Phillip Jennings is in Hell. 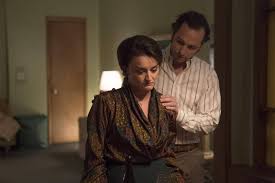 He and Martha both are, really. They’re the perfect couple. Both are atÂ the pointÂ of no return, both emotionally and quite literally, and they are making more and more rash decisions. Making it more complicated is that Phillip actually loves her.

I don’t think he loves her like he loves Elizabeth; he feels affection, and a desire to protect, but I don’t think he sees his soulmate in Martha. But Martha sees it in him, and that’s going to be their downfall. She will eventually realize that Phillip doesn’t love her, and that he isn’t coming with her to Moscow, and that she’ll have to face this alone. She’s possibly the most dangerous person onÂ The AmericansÂ right now; she’s both a Russian hero for her work in the FBI, and the one person who could take down Directorate S.

I don’t think Martha realizes her power yet. I don’t think she quite understands the place in which she stands. But when she does, anything is possible; when she figures it out, she’ll be able to make them do almost anything that she wants. Martha has become the linchpin in which all of the plot in this show spins, and until she’s removed, she’s a bomb waiting to go off.

Oleg reminds me of of Phillip, in that he finds no joy in this endless, secret war. His pain is personal, too; finding out that Nina has been executed nearly sends him over edge. Oleg is holding on, but the pressure is rising; his talk with Stan, and the frankness in which he expresses his disgust over the death of Nina and his brother, was startling. These two countries are at war; these two men have actively worked in the past to undermine the other. But they came together for a short time, ten minutes at the most; they came together to mourn, and try to understand.

But it isn’t enough. Neither are satisfied, Oleg especially. I don’t know what he’s going to do going forward; I don’t know if he knows, truthfully. But the pressure is rising, and he’s going to have to do something. You don’t do what Oleg does, and doubt the way Oleg has come to doubt, and not have something come out of it.

If the Russians decide to take Martha out of the country, Oleg’ll be with them. If he felt like making a move, there would be no better time than then.

“Under Pressure” plays in the background; the world is beginning to crack. She sees Phillip talking to Agent Aderholt, one of the men she beat the hell out of trying to get that list of CIA agents. They are literally fifty feet from the man who could bring them down. Phillip is already breaking, and broken; Elizabeth is already worried, and tense.

Pressure pushing down on me/Pressing down on you, no man ask for
Under pressure that burns a building down/Splits a family in two
Puts people on streets

The pressure rises. Elizabeth climbs into Phillip’s lap.Â They’ve talked to Pastor Tim; they’ve calmed down Paige; they’re going to take care of Martha. They’re going to make it through this together.Â

It’s the terror of knowing/What this world is about
Watching some good friends/Screaming, “Let me out!”
Tomorrow gets me higher/Pressure on people – people on streets

Phillip is afraid, Elizabeth does her best, and things get heated in The Americans.