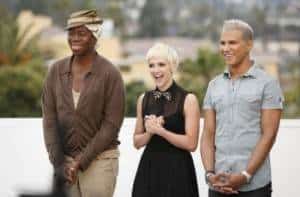 Last season on America’s Next Top Model: Regular Folks, you started to see signs that maybe they were taking this fashion thing seriously after all. Sure, there was the requisite Top Model goofiness attached to the season because, well, this is Top Model, but the show took steps to gain a bit of legitimacy. You had the bee beauty shoot, actual couture fashion being showcased, and a fairly decent group of models, so when it was announced that cycle 17 was going to be an all-star extravaganza, I had to get a little excited.

I mean, surely America’s Next Top Model: All-Stars would cut down on the silly photo shoots to really give these girls the boost they need to enter the next stage in their career?

Y’all, “Ashlee Simpson” (the episode) was a hot mess. Not a campy, crazy, ooh-girl-that-was-so-fun type of hot mess; no, this was a type of hot mess that made this the second straight disappointing episode in what has been a lackluster season.

What was that photo shoot? Aside from the gross-out factor of seeing half-chewed food and smeared condiments all over the place, what did that have to do with their “brand”? The concept of branding goes against what Top Model has taught us in the first place (you don’t want to make the shoot about you; you want to simply please the client and give them what they want), plus the extremely random words given to these girls did them no favors. How are you supposed to showcase being “free” (or “unexpected”, or “unique”) while dangling phallic-shaped food around your mouth? The words themselves weren’t that distinct or specific enough, in some cases, to allow everyone to be equal footing, which resulted in all the “good” photos looking more or less the same.

The show also didn’t seem to get its pacing/editing down for the second episode in the row, as the bottom two was obviously by about six minutes into the episode and the makeovers, Top Model‘s bread-and-butter for melodrama and game change, were almost reduced to an after thought. Usually in a makeover episode, they tend to take center stage and you get to see side-by-side shots of each girl before and after their makeover while gauging everyone’s reaction to their new ‘dos; it’s sort of the start to the “real competition”, as some girls get the confidence boost they need to carry them through the rest of the competition and others fall apart with insecurity. Aside from the meltdown by Bre and the Looney Tunes display that Alexandria put on, there wasn’t really that much going on at Siren Studios. The makeovers didn’t get a spotlight and we didn’t even get to hear what each girl was going to get, so what exactly was the point, again? 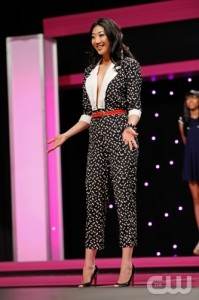 Going forward, I hope that the girls are given much more to do, because they haven’t really had a lot to be judged on thus far. Two photo shoots with really disconnected styling (fancy dresses while selling hot dogs, costumes in the backyard) and one “surprise” challenge don’t seem to be enough to gauge who has star quality, especially when the two eliminations don’t seem to be based on the judge’s opinions. Brittany was eliminated because of indifferent crowd reaction and Sheena was eliminated due to being given a word that was too vague to translate into the type of photography that Top Model is using this season; if this season is supposed to be about star power and who’s got the best hustle, the show needs to start branching off and actually having challenges in an episode. While one of the draws of an all-star season is seeing what type of friction will spark between the various personalities, I’d rather see them focus on trying to showcase who these women actually are and what they have to offer a respective client. I don’t care as much about who Bianca’s being mean to this week (spoiler alert: EVERYBODY) or what crack-y thing Alexandria’s going on about now as who actually has a chance to make a career out of this thing.

Honestly, I’ve been a little disappointed with America’s Next Top Model: All-Stars this season. Had this cycle aired 3-5 cycles ago, I think I could be a little more forgiving, but with the show’s aim to shoot someone into mainstream media, it just feels like we’re taking a step back. Couple that with lackluster cast chemistry and challenges that aren’t very realistic for what they’ll be dealing with and you have a cycle that wants it both ways. It wants to have someone go on to be this out-of-the-box success to bolster the show’s credibility, but it doesn’t want to give them the proper training/tutelage to make them that success. “Ashlee Simpson” is representative of some of the show’s biggest problems at this point and I don’t know if they can turn that around by the end of the season.