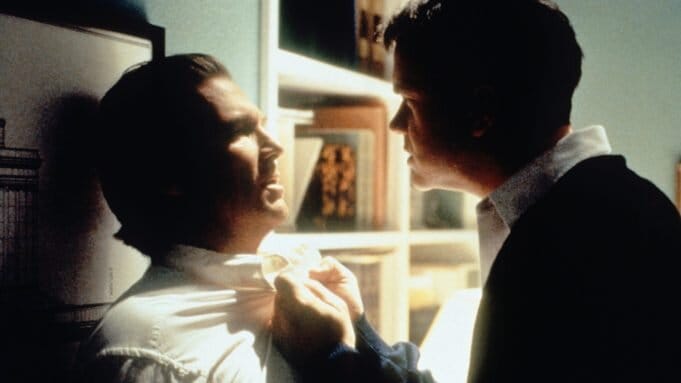 What’s really disturbing about Arlington Road is how easily it could be translated into reality since let’s be honest, our government might make it clear that everything we do can and is sometimes being watched and recorded, but like any possible trap, there’s always a way out and there are always those that are watching those who watch. Someone will always come up with a way to beat the system, even if they have to use that system in order to do it. This is why this movie, as underrated as it is by so many, is inherently creepy and why a series based on the movie could run for a while since there are simply too many ways for a domestic terrorist to operate. The 90s movie will serve as the basis for the series that’s being taken on by Paramount, and at this time it feels certain that it’s bound to follow a group of domestic terrorists that may, or may not, be connected by an idea that will put them firmly against the government and will see them moving about with impunity while seeking to spread their ‘message’ via destroying whatever they can in order to make it clear that they can’t be stopped, and that the government is in very real danger.

Despite the fact that Jeff Bridges and Tim Robbins won’t be there to take up their roles again, it’s fair to say that Paramount will no doubt be looking for those that can pull off the paranoid look well enough to give the series the push it needs. What is kind of troubling about this type of show however is that as many might want to claim, it could possibly give plenty of people ideas on how to become a domestic terrorist in order to get their point across. At this time in the US, it’s been seen that many people have said many things concerning what they want to do to the government, how little faith they have in the government, and what they want to see as the days roll on. The thing is that far too many people talk and won’t do anything since they not only know the consequences of their actions, but too many of them are all talk and no walk, and simply need something to gripe about. In any given protest it’s fair to say that if many of the people had something better to do they would be doing it. But in terms of how this applies to the movie and to the series, assuming that people are going to learn how to become domestic terrorists by watching Arlington Road or any other series that shows terrorists bombing one area after another, that’s kind of laughable. The fear that someone might take these shows seriously is of course something to worry about, but the average individual that attempts to recreate anything seen in the movies or on TV will fail miserably for a number of reasons, not the least of which is that they don’t have the experience or the know-how to understand what needs to be done to fight against the government in such a manner.

The thing about domestic terrorists in the movies and on TV is that there is plenty that’s not being shown, such as the exhaustive searches that would likely be done when it comes to someone that’s even suspected of illegal activity. It’s true that not everyone is put through an extensive background check and not everyone has their life ripped apart when it’s suspected that they have less than honorable intentions, but this is where personal mistakes and poor planning come in, as well as poor execution. Some might say that domestic terrorists are getting better at what they do, and that argument wouldn’t be entirely wrong, but it wouldn’t be entirely accurate either. What we see on TV is fantasy, fiction, and no matter its relation to the world around us and how things are done, there are still many steps that don’t always get an explanation or are shown for the viewing public. In other words, worrying over Arlington Road being a series that might serve as a training video to those that want to use anarchy as a weapon is kind of silly, since most of those that would do such a thing have no true concept of what it means to truly strike back at a nation on their own, or as part of a group.

All in all, this show does sound like it’s going to be capable of starting up one discussion after another, and there are bound to be plenty of people that will take it for entertainment value, while others might find the time and breath to argue otherwise. The safest bet is to just enjoy it and see how things turn out.