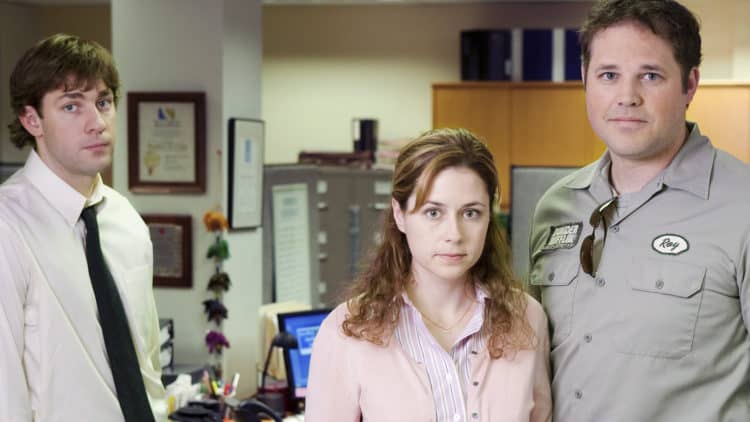 Despite having ended a while ago The Office is still being brought up over and over as new theories and various items that are being noticed by those that continue to watch the reruns pop up now and again. This one is kind of interesting since there were obviously a lot of people pulling for Jim during the course of the show since he was a laid back kind of guy, didn’t cause too much trouble, and he was one of the few people who could really get to Dwight and humble him a bit, at least for a few seconds at a time. But the story this time has to do with the fact that Jim became a huge monkey wrench in the relationship between Pam and Roy, and some folks might have thought that Jim was in the wrong for doing anything that might have jeopardized the couple, but a fan of the show actually came up with an idea that it might not have been ALL Jim’s fault since there’s plenty of evidence apparently that Roy might have been hooking up on the side when Pam wasn’t looking. One of the most obvious culprits is Angela, and while there’s no overt evidence here the looks and a few clues that are scattered throughout the show might be good enough to indicate that Roy and Angela were in fact a secret item, or might have liked to be. There’s no denying that Jim could be kind of a pain in the backside and while Roy wasn’t the perfect fiance it’s still tough to justify breaking up someone’s relationship just because Jim wanted to be with Pam. But if Roy was being a little naughty on the side, that kind of changes things up in a big way.

The only real evidence that’s there to be seen are the looks that were mentioned above, the fact that Roy did in fact say that he would have sex with Angela, with Pam in attendance, and the fact that Roy quickly became defensive when Pam stated that there could be no more secrets between them. A lot of people might admit that once a person goes on the defensive that quickly that it becomes a little too obvious that they have something to hide. This means that Roy could have likely been seeing someone, possibly Angela, and was afraid he’d been caught, in which case he went with the less appealing decision to deny, deny, deny. Saying something like ‘ask anyone’ isn’t exactly a trustworthy statement simply because it implies that there’s no way that a person’s word can be proven wrong, especially if the guilty party is counting on their partner’s trust in them to negate any thought the person might have of actually asking around to see if anyone knows anything. If that happens then many guilty parties will go into panic mode and figure out another plan that might get them off the hook. The funny thing about this is that Pam was simply trying to tell Roy that she’d kissed Jim at Casino Night and whether anyone expected it or not, Roy flipped out and that was it, the relationship was over and done with. It was probably for the best since Roy wasn’t exactly a calm and collected kind of guy, as he flipped so badly that he lost all of the money he was saving for a jet ski to pay for the damages to the bar he decided to wreck when Pam dumped him.

This does change a few things since while Jim is still in the wrong for interrupting a relationship in a manner that was bound to end badly, Roy isn’t a saint in any way if this theory could be proven as true. The idea of Roy having an affair with Angela may or may not be real, but the fact is that it could have been something that was said to happen behind the scenes and we simply didn’t get to see it since there wasn’t much to see. But Roy was undoubtedly not a stable person since he went off on people with very little provocation. At one point he even attacked Jim in the office and it was only when Dwight ended up accidentally pepper-spraying everyone that Roy was stopped. One might have assumed that Dwight would let Roy have a go at Jim before spraying him, but obviously the resident pain in the neck was more worried about keeping everyone in line than he was about getting a little payback on Jim. The long and short of this theory is that yes, Jim was kind of a jerk for stepping into a relationship even if it turned out for the best, but Roy didn’t have much moral ground to stand on if this theory was true.