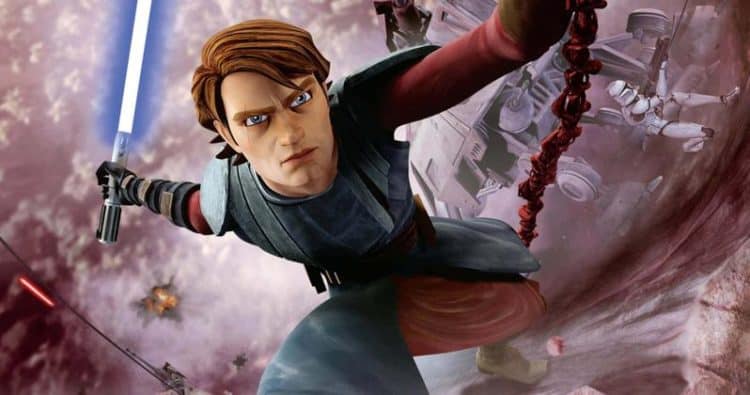 It’s not really hard to believe, but it’s hard to think of what we’re going to see now that it’s been announced that Matt Lanter will be voicing the character Anakin Skywalker again. Apparently Lucasfilm wanted to do another project with the animated version of Skywalker, so here we are. What the project will be is tough to say since no one is giving out any details at the moment, but it’s fair to say that it might have to be set well before the end of Revenge of the Sith. One might even figure that it would have to be set after Ahsoka left unless she’s going to be involved somehow, though nothing’s been said. One can only imagine how many Star Wars fans are starting to theorize just what will happen in this feature and what it will mean for the canon moving forward since a lot of folks likely thought that Anakin’s part was over and done with, even if Lanter has admitted that he always has Anakin on the brain. But there’s still only so much room between the end of the Clone Wars and Revenge of the Sith to really work with since as it was shown in Revenge of the Sith, things were happening quickly, and on top of that, Anakin was about to be a father and he was struggling with the Jedi Order and the council when it came to his ascension to the rank of Master, so there are plenty of possibilities to work with, but it almost feels that, as always, Lucasfilm is going to head off in a direction that few, if any, fans are really going to see until it’s too late and the first teaser trailer is on its way out to the public.

It’s amazing really that when the first trilogy came out, very few people cared to learn that much about Anakin, apart from those that became dedicated to the movies. Darth Vader was the main point of interest, eclipsing even Luke Skywalker up to a point, at least until Luke started increasing in skill and power. Obi-Wan has been revered in his own way over the years, but until the prequels, Anakin was really more for the diehard fans it felt since they were the ones that knew anything about him and the secret was pretty closely guarded. Then the prequels came out and we had the chance to see a young Anakin as he was introduced as a slave on Tatooine along with his mother. He was a podracer and a Force-sensitive, and yet people still didn’t connect with him right away, as though trying to invest in a child was too much to ask. Even when the books were written showing how Anakin progressed and how he continued to be troubled and distant thanks to several factors, people were still having trouble accepting him. Then the Clone Wars came, and people were all over the young Jedi as though they’d been watching him for years. It’s easy enough to laugh at this since by that point a lot of people had become Star Wars converts and were definitely into the act even if a lot of folks still criticized the movie from top to bottom. Hey, the more the merrier when it comes to fans, but as Anakin’s popularity increased, the skeptics still wanted to point out plot holes, a lack of continuity, and many other issues that they believed they had every right to gripe about. Well, to be honest, they did, but at the same time, a lot of people didn’t care. Anakin had become one of the most popular characters finally, and for some it was because they knew that Darth Vader was on the far horizon, waiting to take over Anakin’s place, while for others it was a chance to see the constant struggle that the Jedi put up in an effort to be a decent individual and not be ruled by his emotions.

Where this story is going to head off to is unknown at this time, but the upside is that Anakin is a widely respected Star Wars figure now and it’s fair to state that people are going to watch simply because it’s Star Wars, and no matter what anyone says about Disney doing so much to muck up the franchise, most people will keep watching. But figuring out where this story is going to go and what the point of it will be is going to be interesting to find out since one would have thought that Anakin’s story was just about told at this point. Lucasfilm obviously found something else they figured could bring another profit, so it’s easy to think that they’re going to play it for all the idea is worth.