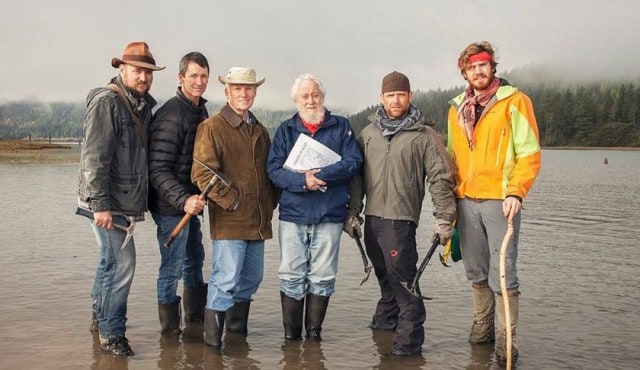 Withdrawal — it’s never a very pretty thing. Since the beginning of time, man has striven with his addictions: from food, alcohol, drugs and a variety of other sundry and torrid little evils. Sometimes the things that are not good for us are the very things we want most of all. My wife would tell you that I have a nasty little chocolate habit that is alarming in the sheer quantity of the stuff that I manage to shovel down my gullet. My better half used to dance her own ballet of terror with the dreaded animal known as the potato chip. So we all have our addictions and we all struggle with the act of quitting that which is bad for us. But what do you do when you really don’t want to quit an addiction, when you in fact revel in the very cheesy feeling you get from your obsession? That is the nagging question our house faced when not-so guilty pleasure “The Curse of Oak Island” recently ended its third season, leaving us adrift in a veritable ocean of pale imitators that were only in existence to capitalize on the very phenomenal success of History Channel’s ode to the hunt for buried treasure. Like two drowning steerage class passengers on the Titanic, we flailed and grasped at any sort of floating debris that happened to drift by us. The analogy — and disclaimer – being that there was not much logic or reason in our choices of life raft; we were just struggling not to drown once terra firma bid us a hale and hearty adios.

This might explain our dalliance with such Oak Island knockoffs as “Curse of the Superstition Mountains” and our brief once-over on the new reality show “Billion Dollar Shipwreck” which we quickly aborted any and all viewing plans after being subjected to a graphic preview of a diver for the show in the apparent throes of a literal death dance. We’re all voyeurs to an extent, we all have some part of us that rubbernecks at the intersection of some catastrophic wreck, yet the cries of a hapless diver exclaiming that her own demise was imminent was too much for this husband-wife duo, even in this incredibly desensitized day and age. So what to do to scratch that ever-elusive Oak Island itch? AHEM — Sound blaring trumpets: Ladies and gents, allow me to submit for your approval the latest in the lost treasure reality television craze, Animal Planet’s very own “Curse of the Frozen Gold.” (A Ferris Bueller like aside to our gentle reading audience: Why is it that every lost treasure has to stake a claim on a curse? Is not the hunt for mysterious and lost gold exciting enough that the networks feel obligated to throw in the proverbial kitchen sink at its viewers? Ahem. End of min-rant by ye olde writer)

When sitting down to watch this new show, we steeled ourselves for the worst. The hallmark of “Curse of Oak Island” was the spirit amongst the treasure hunters of teamwork and brotherhood. If the team ever has a disagreement then great effort is made to talk about the issue at hand, thus avoiding the dreaded reality show staple of “the angry showdown.” This is a small point about the show, but it is an important one: You actually like the team from Oak Island. Would we find the same sort of camaraderie in this new show? Unfortunately for the part of us hankering for such a thing, the answer is a resounding “no.”

A quick summation about the gist of the show: There’s been a platoon of prospectors over the last hundred years or so that have been in search of Slumach’s gold and the Lost Creek mine. The Slumach in question is a gentleman who put a curse on a motherlode of gold he apparently discovered shortly before taking a stroll off of a hangman’s platform in 1891. Apparently this disenfranchised man put a curse on his gold and all who would try and find it right before breathing his last. Fast forward to 2015 and we are introduced to a cast of characters that seem put together right out of Central Casting itself.

Who are the souls who would disregard the so-called curse and go in search of the legend? Six men, all with different skill sets, set out to find the lost treasure in the brutal wilds of British Columbia: Two of the team are the go-to Alphas whenever a seemingly impossible physical task is called upon in the quest (think of the annoying next door neighbor who is perpetually in motion with a variety of activities designed to make us lesser mortals feel quite slovenly). There is a local man whose main function, as far as I can tell, is to shake his head skeptically as each new plan is hatched to find gold. The two sanest members of this odd assemblage are older in years and scholarly in their approach to finding whatever might — or might not — be waiting to be dug up. Finally rounding it all out is the shows answer to Alexis Carrington or J.R. Ewing; a strutting and insecure little man who is as greedy and gold obsessed as the day is long. Constantly bedecked in a crumby rip-off an “Indiana Jones” style fedora, this fellow embodies every blessed thing we had been hoping to avoid when trying to achieve our Oak Island fix: he tells one lie after another to his fellow team members, he has a perverse desire to insinuate himself into every aspect of the search, he’s a sloppy researcher and he’s prone to fly into fits of jealous rage if he feels anyone else is attempting to upstage him. In appearance he looks a bit like the venerable comedian Louie C.K., although he is a Louie who is lacks the lovable charm or affable good nature of the original model. This alternate Louie C.K. of Earth Two has long ago turned to the dark side of gold hunting and it is hoped by this one viewer at least that he doesn’t own a gun license, lest things take a turn into a deleted scene from “Reservoir Dogs.”

There are a few minor saving points to the proceedings, chief amongst these belonging to the elder statesmen of the hunt. They have a quiet authority about them that allows them to easily stand out from the rest of their group. Unfortunately, their screen time is limited to mostly slumming around a very tricked out “base camp” as they aggressively pore over table sized maps that would choke Mr. Ed. What does it say about our times when most of the screen time to the show is dedicated to the other more flamboyant members of the group at the expense of these two logical and soft-spoken members?

Watching the first four episodes of “Curse of the Frozen Gold” did not wean us off of the delectable pleasures offered by “The Curse of Oak Island.” Instead, it reinforced the things we enjoyed about the latter as it spotlighted the annoying inconsistencies of the former. Staring morosely at my wife as the last episode wound down, I resignedly tore into a chocolate candy bar and mentally checked the number of days until our once and future addiction would return to television. To my wife’s good credit, she stayed far away from the potato chips as she turned off the hunt for Slumach’s treasure. One of us at least had the good sense to know what was worth the title of addiction and what bellied up to the bar as nothing more than a minor annoyance.