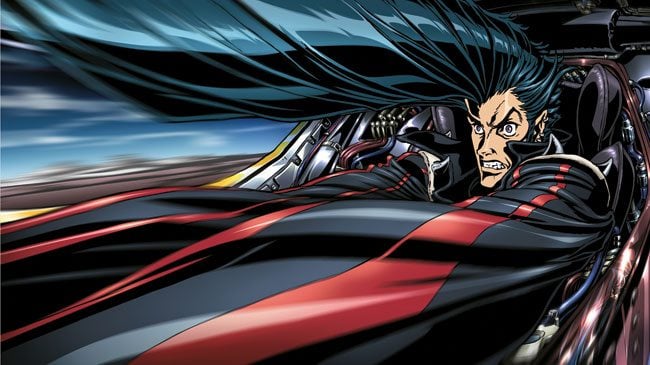 Redline is an intergalactic space race Japanese animation film from the highly praised studio Madhouse. The film is set in the distant future and was adapted from an original story written by Ishii. It took seven years to make and has over 100,000 hand-drawn frames. This is a lot longer than Madhouse intended but man was it worth the wait.

Redline features the story of JP. An intergalactic space racer that has dreams of becoming the best. Unfortunately for him, he gets mixed up in a gambling ring which puts a halt to those dreams. Instead of being the racer he always wanted to be, he has to settle for being some gambling crews puppet. Winning races when he has to and losing them when he’s asked to. At the final elimination race of the season, one that JP needs to win to qualify for Redline, the greatest race in the galaxy. He contemplates the whole gambling aspect of the racing world and considers winning the race so that he can qualify even though the boss man told him to lose. So begins the story of JP and Redline.

It’s a great story from start to finish. It’s face-paced and barely leaves you room to breathe. One of the reasons why this is a must-watch. Imagine a space race that requires participants to race through an entire planet without the permission of the planet’s inhabitants. This means that while this race is going on the planet’s defense force is on full alert trying to put a stop to these racers and take them out. Not to mention there is a giant nuclear baby. You read that right. That is Redline. Overall the story is so over the top and thrilling that anyone who watches Redline will be left with their mouth wide open by the end of it.

The Art and World

The art in Redline is absolutely incredible. Well, it should be seeing as Madhouse had over 100,000 hand-drawn frames in the movie. The colors and the animation are phenomenal. Every frame in Redline feels like it serves a purpose. Whether to signify some sort of motion or convey some sort of feeling. It feels fluid and it flows incredibly well. It’s beautiful. If you don’t believe us then you will have to see it for yourself. The racers and vehicles bring their own unique punch to the mix. Their personality seems to be embedded into their design which makes it so that you can almost visualize what the character’s actions and thoughts will be before you see it on screen.

One scene that sticks to us is when JP first uses nitrous during his initial race. The way the car slowly starts to drag away and it seems as it’s being sucked away into the center of the screen and slowly everything follows is truly a work of art. The whole world design looks like it’s set in a futuristic sci-fi world where multiple races across the galaxy have come together. This can be seen from the very first race where the crowd is booming with creatures from every corner of the galaxy sporting all sorts of different dimensions. There are creatures with three heads and two eyes. There are computerized humanoids that seem all machine but have emotions. The world is electrifying and enticing. It’s one that we wish we could explore more but unfortunately, all we have is one anime film. Fortunately, that film is fantastic.

Why You Should Watch It

Redline is an incredible work of animation. It uses hand-drawn frames that flow almost flawlessly through the screen to present a galactic race that is both thrilling and completely out of this world. You should watch it because there really isn’t anything like it out there. This film features everything. Speed, betrayal, and an incredible race track. It’s one of our favorite anime films and one that you should add to your viewing list.

If we were to hope for anything it would be for Redline to release its very own anime series where we could follow a new set of characters through all the elimination rounds that lead up to Redline. We can only imagine the racers, the tracks, and the worlds that Madhouse could create if they really set their mind to it. Of course, we don’t think that they’d opt for the hand-drawn frames in this day age. Especially with how much digital art and animation have progressed. For more anime you should watch make sure to check back here! Let us know in the comments if there’s anything you want us to watch.