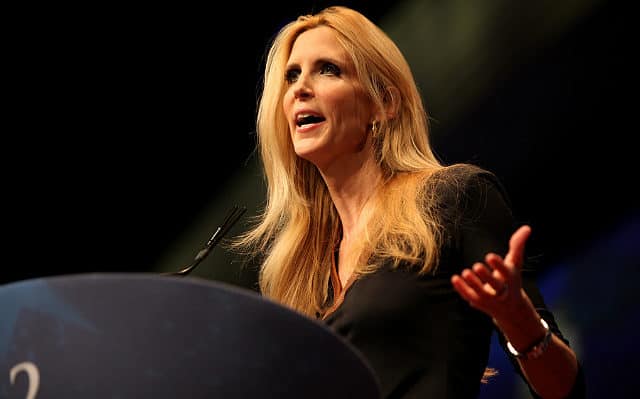 For better and for worse social media has become the place to voice our thoughts and opinions. Â Usually our petty arguments about various events last about a day and are easy to tune out. Â  However, when it’s still being talked about two days later it’s hard not to wonder what the fuss is about. Â That’s what’s happened withÂ Ann Coulter ranting to Delta AirlinesÂ about her flight on Saturday.

Coulter is a extremely right-wing political commentator. (She once said, “I’m a Christian first, and a mean-spirited, bigoted conservative second, and don’t you ever forget it.”). Â This past weekend she was moved to a different seat on a Delta Airlines flight. Â She was not happy about it.

Delta isn’t my favorite airline, so I might have actually sympathized a bit with Coulter – until looking at the facts. Â  Coulter made a huge deal about paying for extra leg room. Â The thing is, she didn’t lose that with the seat change! Â She remained in the same row, which if you look up the design, Â has the same amount of legroom as the seat she was in.

Now, although it’s largely a matter of preference, Â you could make an argument that the aisle seat is better than the window. Â The problem is that Delta says records Coulter had originally booked a window seat – 15F. Â She didn’t change to an aisle seat until under 24 hours before flying. Â Apparently that change was not noted on her ticket, and it possibly was not entered correctly into Delta’s system.

At the time of boarding, Delta inadvertently moved Coulter to 15A, a window seat, when working to accommodate several passengers with seating requests.

When there was some confusion with seating assignments during boarding, a flight attendant stepped in and asked that all of the passengers move to the seats noted on their respective tickets.Â All customers complied and the flight departed without incident. Following the flight, crew members reported that there were no problems or concerns escalated.

If you’ve done any amount of flying you know that being asked to switch seats so that families or couples can sit together isn’t uncommon. Â It’s usually a switch similar to what’s described – t0 a comparable seat. Â Remember, even with the window vs. aisle, Coulter was not moved from the “more legroom” row. Â  Nevertheless, an airline making you switch seats is normally enough to get many people annoyed. Â It’s one of many practicesÂ that puts the airline industry is near the top of the list for bad customer service.

Here’s the problem. A normal, proportional response to having to switch seats and not getting the aisle would be to tweet a complaint or two and request a refund. Â Coulter didn’t do that. Â Â From the way she reacted on TwitterÂ Â you would think she’d been beaten up, dragged down the isle and thrown off the plane. Â (Of course, she hasn’t exactly been sympathetic when a person has in fact been dragged off of a plane.) Â Instead of her sending out a of a couple of tweets, she dashed off about 30 – and not just about the seat switch.

Coulter insulted the woman whom the seat was given to.

HeyÂ @Delta, if it was so important for the dachshund-legged woman to take my seat, she should have BOOKED THE SEAT IN ADVANCE. Like I did.

She also posted a photo of the flight attendant and used many tweets saying awful comments about the Delta staff, the company. Â Then she complained about the lack of wi-fi.

Also, @Delta, your wifi doesn’t work — probably to prevent passengers from tweeting from the plane about how they’re being treated.

All of this was Saturday. Â On Monday it was still going on…

Today’s consumer quiz: Why is @delta worse than @united? A: United drags customers off the plane, but soon Delta will have to drag them ON.

The idea that what happened to Coulter is remotely in the same ballpark to what happened on United with the doctor is absurd. Â It’s these kind of statements that have caused the social media clapback.

Given the content of Coulter’s media footprint it’s not surprising that the irony of her comments to DeltaÂ have recieved so much social media commentary. Â  This is the best summary of what people have been reacting to.

Ann Coulter=”Blacks need to get over their victim mentality”
Ann Coulter has to change seats on Delta=”Oh my God, I’m being victimized!”

These days the airlines are not known for their great customer service. Â If the airline had forced Coulter into a different row, or thrown her off the plane, or if the passenger had attacked her and the staff did nothing, maybe Coulter’s endless ranting could be seen as justifiable. Â  Â That’s not the case though.

All of this occurred because a passenger put in a request to the airline to sit with her companions. Â Did that young woman deserve to become visual internet fodder? No. People make requests like this all the time, and more often than not it’s not a big deal. Â Delta mad a change that kept Coulter in the same row, in a window seat – which she had originally requested. Â Likewise, the stewardess was simply doing her job in sorting out the seats based on the actual tickets presented to her. Â The way Coulter singled these people out was inappropriate.

How her ticketed seating got messed up is on Delta though. Â Being that Coulter had at one point requested a window seat, it’s possible the computer never registered the change. Â It also could be that the person at the gate saw that she’d initially requested a window seat, and made the switch based on that. Â Regardless, of how it happened, it’s Delta’s error, and most people would be irked about not getting the seat they paid for. Â  It’s the level of fury Coulter’s levied that is way out of proportion. Â The longer it goes on, the less sympathy she gets….

Delta apparently saw the issue and took responsibility for the computer glitch. Â On Sunday they responded to Coulter on Twitter by saying they would refund the 30 dollars she paid for booking the seat beforehand. Â Then they defended their employees and the other customer.

@AnnCoulter Additionally, your insults about our other customers and employees are unacceptable and unnecessary.

This morning on ABC’s talk show,Â The View, the panel agreed with Delta.

.@JedediahBila reacts to Ann Coulter’s Twitter rant against Delta and a passenger: “This woman could’ve gotten harassed. Don’t do that!” pic.twitter.com/bQ0i8zbeF0

I’m inclined to agree with The ViewÂ panel. Â Yes, it’s disconcerting to have your seat switched at the last minute – even if it is in the same row. Â She could have had everyone on her side. Â  However by posting photos of the individuals involved and maligning the entire organization with, at this point, well over thirty online posts, she’s managed to make Delta into the sympathetic party. Â  Ann Coulter was sitting in the same extra legroom row that she booked. Â Was it really that horrible to let those people sit together?