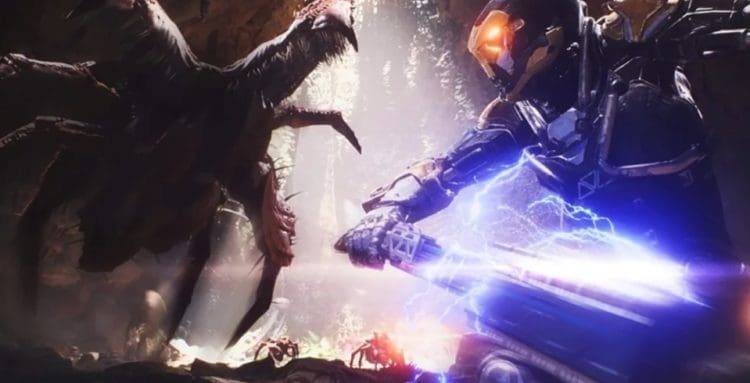 For Anthem players who may have missed noticing it, there is a timed event going on right now. The aptly named “Beasts of the Field,” event has a three-day timer so you’ll want to get started right away. The description is basic, there’s a problem with Predators surging in Great Falls Canyon and the Valley of Tarsis. Naturally, you can help avert the crisis for a profit. The base reward for trouncing a solid hundred Predators is 1000 coin.

If you are new to Anthem here’s a quick history lesson to help you catch up. If you ever wondered what it would look like if Tony Stark managed to start a breeding program using his own ideas, components from the Gundam universe and some hints of Fullmetal Alchemist, then you’re going to lose it over the Javelin Mechs in this game. As a Freelancer, you get to pilot this stunning piece of tech and take jobs from the citizens of Fort Tarsis.

You’ll be facing the frontier of Anthem, a world with the sort of truly wild ‘wildlife’ that’s apt to trample you and eat your face if you’re not careful. Fortunately, the smooth flight controls and excellent battle mechanics will let you use some great unique weapons and abilities in order to handle your business.

You can find some really interesting loot, explore mysterious relics that spawn hordes of trouble and dodge enemy factions. Involved storylines with really well done acting help to draw you in and connect you to the world. Meanwhile, the challenging yet interesting combat keeps the action going. If that’s not enough, the graphics are absolutely stellar and some of the effects are unbelievably gorgeous.

The downside to Anthem is not a long list but there are some good points. For one thing, Tarsis itself is weirdly silent and incredibly slow to move around except during your interactions. Speaking of interactions, the plotline doesn’t actually give you a ton of wiggle room to make choices and there’s just not much consequence when you do. The plot based cut scenes can be a little out of sync with what’s going on in your playthrough and play itself can get a little buggy.

Like many, if not all, RPGs, you do hit a point where grinding becomes the norm for a while. You’ll need to tank up your stats before you hit the endgame if you actually want to win. While this is to be expected from most RPG style games it does get dull. If you make a bad choice in your gear, there is no way to change up your loadout without canceling out of the mission and watching a terribly slow loading screen. That’s not the worst complaint ever, and in a way, it might actually play a little more realistically because of this feature, but that doesn’t mean anyone likes it.

In order to participate in this event, you’ll need to take the Arcanaist Korox Study challenge and complete it. This is a Freeplay event. Simply slay the predators that approach. It looks like you’ll need to pound some Ursix and Brutes to get paid. It’s a fairly simple request. The overpopulated map means ample opportunity. Unfortunately, there may be some other baddies in the way including Anrisaur’s, Korox, Skorpions, Spiders, Tesilars, and Wyverns to name just a few.

It’s unclear just now whether this is a buildup to some deeper plot. While it is pure speculation to says so, it does seem pretty reasonable to wonder why such a sudden emergence of a horde like this is happening. Are they being driven out of some nearby home? Have they been herded here for some nefarious purpose? Is it a coverup to distract you from some deeper conspiracy? Honestly, it’s hard to tell, but who doesn’t love to kick around a slew of creatures and take home a shiny thank-you that you can spend on something nice? For now, it’s enough to go cave some skulls in and ask questions later, after you get paid.

Anthem is a ton of fun as online RPGs go. Glitches and fan complaints aside, the visuals are top tier and the plotlines may be lengthy but they are well written and executed. There’s plenty of great battle to be had, and the grinding is pretty much part and parcel for the game style. Whether you’re joining just in time to hit the Beasts of the Field Event and kick some local tail, or you’re an old hand at the Freelance scene on Anthem, there’s a whole lot of potential in Anthem. As for the BotF event itself, whether it’s the opening play in some big new plot or not, it’s a great chance to go experience some of those special effects firsthand and get in some flight and combat experience.