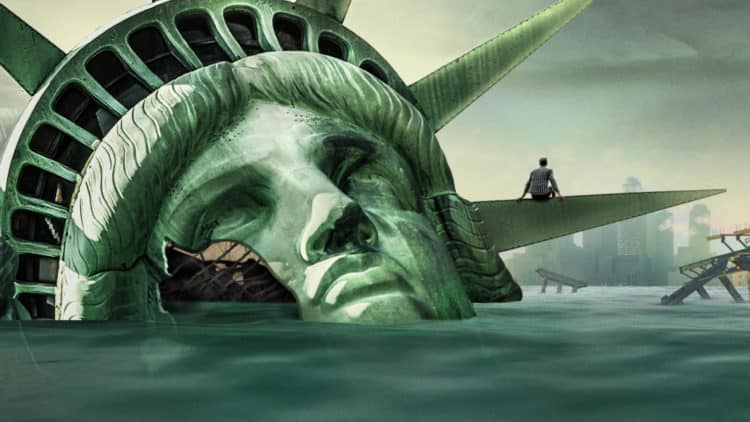 Advances in science, technology, and medicine have allowed us to greatly improve our quality of life. Thanks to these advances, we can do all sorts of things that seemed impossible less than 100 years ago. But if there’s one thing we can’t do, it’s spare ourselves from the wrath of mother nature. Sure, there are things we can do to prepare ourselves, but when a natural disaster occurs we are truly at the hands of nature. This is something History’s new series, Apocalypse Earth aims to focus on. The show, which airs on Sundays at 9pm EST, will explore different natural disasters and the impact they’ve had on on people and the earth itself. Keep reading for 10 things you didn’t know about History’s new show, Apocalypse Earth.

1. The Show Will Be Educational

If you’ve always been interested in learning more about natural disasters, this show is definitely for you. Each episode will provide a clear breakdown of the disaster being discussed. Not only will you get to learn about the disasters themselves, but you’ll also get some insight into the real impact these storms have left behind.

2. Each Episode Will Focus On A Different Disaster

Regardless of what kind of natural disaster or phenomenon you’re most interested in, Apocalypse Earth will likely cover it. The season began by discussing some of the most famous volcanoes, and each episode will focus on something new. From hurricanes to tornadoes, there will be a little bit of everything.

Although the show is still very early in its first season, the History Channel website has already added some cool extras that fans can watch in between episodes. The extras, which mostly consist of blog posts, will provide an additional deep dive into topics similar to those discussed on the show.

4. The Show Doesn’t Have A Cast

Apocalypse Earth is essentially a docu series, but it doesn’t have a regular cast. New people will appear on each episode to share their thoughts/expertise on whichever disaster is being discussed. Outside of the show’s narrator, you will hear new voices and see new faces every episode.

5. The Show Will Cover Disasters From All Over The World

In a lot of ways, natural disasters are an equalizer. No matter where you live, what kind of person you are, or how much money you make, you can still be affected by the throes of Mother Nature. Apocalypse Earth will show this by featuring disasters from different places all over the world.

6. The Show Is Not Affiliated With The Film Apocalypse Earth

Some people may already be familiar with the name Apocalypse Earth; that’s because there was a film released in 2013 with the same name. However, the film and the History Channel series are in no way affiliated. In fact, the two projects are on two totally different subjects. Instead of natural disasters, the film Apocalypse Earth is about aliens.

7. The Show Hasn’t Gained A Big Following On Social Media

In many cases, shows are already being talked about on social media long before they debut. However, that doesn’t seem to be the case with Apocalypse Earth. We weren’t able to find any official social media pages for the show, and the hashtag #ApocalypseEarth hasn’t been getting a lot of action.

8. The Show Will Feature Disasters From Different Decades

Lots of things have changed over the years, but the one thing that hasn’t is that we’re all still at the mercy of nature. For that reason, Apocalypse Earth will highlight disasters throughout history. This will help viewers see the progress we’ve made when it comes to protecting ourselves, but also that we are still vulnerable in many ways.

9. Episodes Are Over An Hour Long

Have you ever watched an episode of a show and felt like it ended way too quickly? That probably isn’t something you’ll feel when watching Apocalypse Earth. The first episode of the show was 90 minutes long, so there’s a very good chance that the rest of the episodes in the show will follow this format as well.

10. The Show Is Narrated By Harry Pritchett

You may not be familiar with Harry Pritchett by name, but you’ve probably heard his voice more times than you know. He has worked as a narrator with the History Channel for several years. He has also worked with major brands including Dunkin’ Donuts and Direct TV. In addition to his experience as a narrator, he has also written and produced some projects of his own.