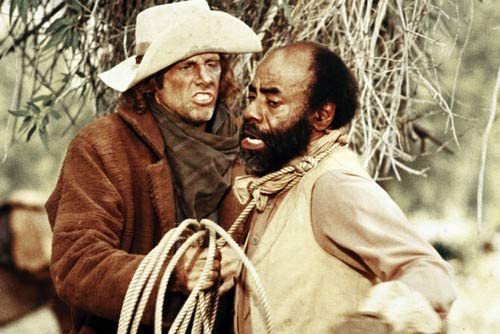 Roscoe Lee Browne is likely a name that a lot of people don’t remember and would have to look up since the man was a legend in his own time but was fading out by the 70s and 80s, and getting a role here and there was starting to become more and more difficult as he continued to try and keep his career and his reputation up. He didn’t completely fade from public life as some might like to think, but his influence in show business definitely waned quite a bit and it’s not hard to guess why, since he was still doing stage work when a presence on TV and in movies would have helped him to keep himself in the loop and therefore a more popular face that people were used to seeing. The funny thing is that this guy had one hell of a career, and to prove it all one needs to do is conduct a quick Google search and see what comes up under his name. He wasn’t a nobody, and he definitely wasn’t a flash-in-the-pan actor. But the thing is, he was someone that was far more popular in the 50s and 60s, and while there are still plenty of people that enjoy this era and would love to see it emulated more often, Roscoe’s fame didn’t really make it out of these two decades intact. To be certain, the moment he started growing older and kept moving forward with his career, and the further he moved away from the glory days when he was at his peak, the more he started to fade out and become just another actor that had been someone and was trying to hold onto that fame. Anyone wanting to dispute that only needs to look into the history books and see that this has happened to many actors throughout their careers.

When an actor is in their prime there’s little if anything that can really touch them, but once they hit their peak, most individuals find that the downward slide is a little too quick for their liking, while others take it with at least some grace and dignity while doing what they can to level out the descent. One also has to keep in mind that Roscoe’s ability to act in so many movies and on TV was remarkable since during his time there weren’t a lot of people of color that were given prominent roles, so even seeing him was extremely impressive since it was clear that he wasn’t going to back down and that he really wanted to be where he was. One thing that didn’t really help at times was that Roscoe was hard to pin down when it came to figuring out what kind of actor he was. What this means is that wasn’t an action star, and he wasn’t the romantic lead that people tend to want sometimes. He was a worthwhile comedian, but drama was more his style, and unfortunately, that didn’t leave a lot open for him at that time since again, people of color weren’t given a whole lot in this time period. It didn’t help that he was a closeted gay man either, and had this been known at the time it’s very likely that nearly every part he auditioned for would have been closed to him. People might want to bristle at that fact but the past wasn’t always a nice place, and as such folks such as Roscoe and many others had to find a way to achieve their dreams by making a situation work. According to his film history though he made things work up until his death in 2007 when he lost his fight with stomach cancer.

It’s easy to assume that Roscoe was just about done with his career at that time, but he did manage to take on several voice roles during his career, which only added to a reputation that lasted for decades and yet is barely known today. I’ve continued to say that ignoring the past is bound to impact the future, which is just another way of saying that those who forget the past are doomed to repeat it. In this case though, those that forget the past are paying a great disservice to their industry since Roscoe was one of the greats that helped to forge the business into what it is today. This is why celebrities that have been long gone and in some cases passed not that long ago need to be held up and remembered since whether people want to admit it or not, every person that steps into the acting industry owes it to those that have been there, done that, and given their lives to building up the business that so many take for granted.