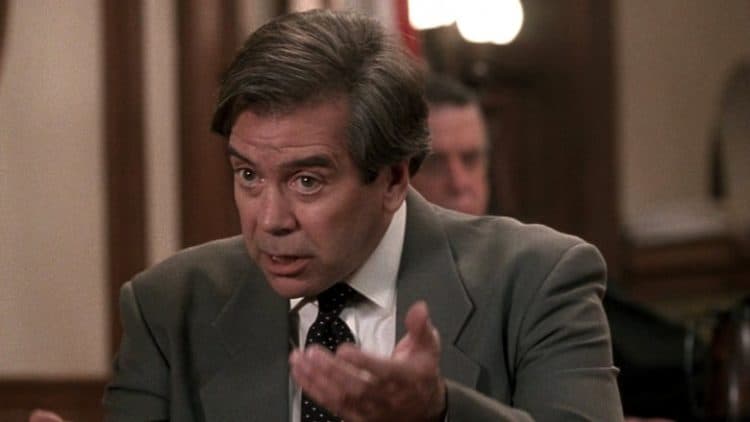 Every person has their own memories of one actor or another since it all depends on when they started watching that individual and which roles they can recall them taking part in during their own lives. Lane Smith passed away nearly 16 years ago but has remained one of those that we can easily remember since not only did his career last for quite a while, but he played several memorable parts that allow people to recall his great level of talent in a number of ways. A lot of times he would tend to play a rather hardnosed individual that was good at the role he took on in life but wasn’t much for adapting to another line of thought unless he was brought around gradually or found that it was something he simply couldn’t fight against any longer. Sometimes the roles he took were entirely believable and every now and then it felt as though his characters would be pushed to the brink of reason but not past that point. Essentially, Lane would usually play the kind of characters that had very traditional values and would serve as old-fashioned role models without a lot of give to their character. But in that manner, he did end up playing in roles that kind of reinforced a part of American culture that was comforting to some and very old-fashioned to others.

One of his more negative roles was that of Coach Jack Reilly, who coached the rival team the Hawks in The Mighty Ducks. A lot of us that watched the initial movie should remember this guy since he was the individual that played upon Gordon Bombay’s emotions in a very diabolical manner in order to get his players to perform the way he wanted them to on the ice. Reilly would have been one of the first and the last people that a lot of parents would have wanted to see coaching young players simply because he knew what it took to win, but he wasn’t above pulling cheap shots to make it happen, as was evidenced in the final game between the Ducks and the Hawks. While TMD was kind of a cheesy, family-friendly movie, it was still one that managed to stick with a lot of us since it promoted fair play while remaining competitive, and showed the consequences of cheating in some ways. For instance, targeting another player simply because the coach knew his skill level could help the other team is something that no coach in their right mind would think of doing, well, at least no ethically-minded coach would do this. But Reilly was one of his more noticeable roles to those that grew up in the 80s and the 90s since The Mighty Ducks came out in 1992, when a lot of kids were just hitting that age when family movies were no longer cool, even if they would still watch them now and then.

Another fun role to watch came during My Cousin Vinny when Lane played opposite of Joe Pesci as D.A. Jim Trotter III. Those that watched the movie will remember that Vinny’s cousin, played Ralph Macchio, and his cousin’s friend were being tried for murder after being falsely accused, and Vinnie, who wasn’t even a practicing lawyer yet, took the case. Trotter wasn’t the bad guy in this movie, but he certainly wasn’t about to help Vinny out any more than he was required to. Despite that, he was still a gentleman that was out to do his job and make his case. The fun part about this role is that he was a man that as all about fair play but wasn’t above trying to gain the advantage whenever he could, in a way that was allowed by the law and wasn’t going against his ethics or principles. Like many roles that Lane took on during the course of his career, it was one that showed that he could be stern but just, and was the kind of guy that could be a role model no matter that in real life a character such as Trotter wouldn’t be liked by everyone simply because of his profession and because he knew how to win, when the case wasn’t being drummed up against two innocent individuals.

The last role I wanted to mention, since it’s a personal favorite, was that of Walter Warner from Son in Law, since Walter is the farming, level-headed type that wasn’t bound to change, wouldn’t change, and would see no reason to change unless he felt the need. From forgetting Crawl’s name, played by Pauly Shore, to being resistant to change, he played what many would think of as the typical farmer. But by the end of the movie he showed a capacity for change and acceptance that might not always be the norm but is still fun to see. All in all, Lane was a great actor that had a long and successful career, and it’s safe to say that he’s missed.