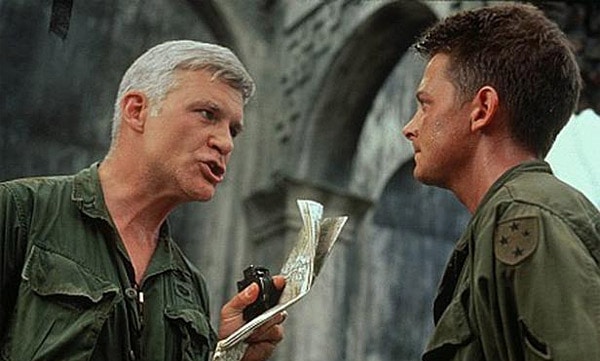 It’s not unheard of for an individual that’s been active in the military to take up acting or at least help out as a consultant, but Dale Dye has taken that to a degree that not many can match. Learning that the guy was as gung-ho for the military as he could be from a young age makes it all come together since he would hear stories from those around him when he went to work with his father. While low test scores kept him out of the US Naval Academy, this didn’t deter Dye from joining up with the Marines, where he would serve as a correspondent for many years and would even see more action than the average grunt. The fact that he associated with and felt more comfortable around the grunts kind of marked him as an individual that was mean to be there and was in some cases fearless as well as maybe just a little off at times, but in one of the best ways. If anything, it’s likely that the correspondence that he was responsible for was highly valued when it was received.

Many people have watched war movies and likely thought that there were plenty of issues with them since some of the scenes didn’t look as though they could have happened in this manner and there was likely a great deal of material or story that was being left out. Or perhaps people felt that the action was too overplayed and wasn’t realistic at all. Dye is one of those that have been helping out on war movies and TV shows for a while to increase the sense of realism, as he has helped and acted in several movies and TV shows over the years, giving his expertise and his acting ability in equal measures. For Dye, it might have been a point of pride to make certain that things were as accurate and correct as they could be, though it’s also likely that he gave in a time or two since the director has a little more pull in the movie than the guy that’s helping out.

But it does still feel that Dye has been listened to over the years since some of the movies and shows that he’s worked on have been seen to draw an impressive number of viewers, and their sense of realism has been heightened to a great degree. One has to imagine that it might be a bit irritating for many members of the military to watch a movie and realize that how they’re trained, how they operate, and that the things they do are being portrayed in a manner that’s inaccurate to wrong at times. It’s also fair to think that a lot of them don’t care since they might find it humorous as well given that most of the actors that star in these movies couldn’t do half of what they do. It’s entertainment, as most people realize, and while a lot of those that are currently in the military or are retired might get a good laugh at some of the stuff that goes on, it’s always nice to see realism on some scale, since Rambo and all the rest become a little redundant after a while.

Folks such as Dye tend to do what they can to make certain that people are given the entertainment they want but also the realistic view of the military as it is, not as Hollywood would like to depict it. To be sure, a realistic war movie tugs at the emotions in a much bigger way than a movie that’s been allowed to go off the rails while trying to pose as a realistic military movie. Dye has been a part of quite a few movies and shows, some with a military theme, and others without it. When looking at a simple description of the things he’s seen and done, it’s very easy to be impressed since he’s been around and done a few things. To think that he was set on his path when he was so young is amazing to be certain, but to think that he stuck with it and didn’t deviate from his course unless he had to at times is even more impressive.

It’s not hard at all to say ‘thank you’ to Dye for his commitment and his passion for the military and for wanting to get into entertainment since his help has managed to increase the image of several projects that might have otherwise not been quite as impressive. Those that come from the military into the entertainment field are often far more valuable for keeping things real and to the point, but they obviously know how to help create a story that’s both compelling and that can keep a person’s attention.