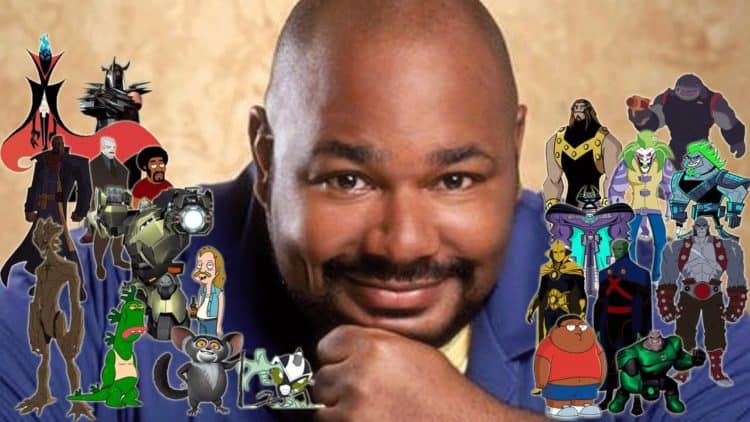 There’s nothing that can be taken away from Kevin Michael Richardson’s long and extremely impressive career since just looking down the list of names that he’s voiced over the years it’s easy to see how he’s earned his spot in the business and the regard that people have given him. Obviously his voice has a pretty good range on it since looking at all the characters he’s voiced over the years it’s easy to see that he has to be able to hit a few different notes to make every character as effective as possible. Looking over his credits it’s impressive to see all the different voices he’s managed to bring to life and it’s kind of funny to realize that he earned his way up by doing commercials and voicing very simple one-liners and even sneezing at one point. No joke, one job was just Kevin sneezing, and that managed to get him paid. Obviously there’s more to voice-acting than just getting on a live mic and giving voice to the dialogue that accompanies a character in an animated feature since there are a lot of different things that voice actors do when it comes to their career. But one voice role, in particular, is dividing fans at this time and while there’s a reason, it’s not Kevin’s fault or doing, but he does stand to catch at least a bit of the drama that is bound to occur from it.

In the wake of the Black Lives Matter movement, there have been a few things that have been shaken up, and the entertainment industry has been bending the knee just as much as anyone which is pretty sad when one takes it into perspective. Let’s put it this way, the best person for any job, no matter their color, race, religion, or beliefs, should get the job, no matter how that’s taken by people claiming that everything they don’t like is a problem these days. Taking nothing away from Kevin, the fact that he’s being cast as Dr. Hibbert on The Simpsons isn’t a problem due to his recruitment, it’s a problem because it means that entertainment, in the name of the ever-encroaching need for more and more diversity, is becoming an apologist haven that carries with it a very troubling double standard. What this means is that people of color are being given roles that have been accomplished by Caucasian actors and have been loved for years, simply based on the color of their skin. If it were merely talent that was bringing Kevin into this role, since he has plenty of it, there might not be the need to say anything. But with BLM demanding that POC’s take over any and all roles that are representing people of color, things are changing in a manner that’s more segregated than people might realize. The double standard of course comes from the fact that there appears to be no trouble with people of color taking on Caucasian characters, which is a very noticeable double standard. Again, if they’re able to do this and make it work, kudos to them since they’re doing the job they want to do and aren’t going to be judged by anything other than their talent. But booting people out of a role simply because they’re not the same color as a FICTIONAL character is kind of nuts.

The idea used to be that anyone that can take on a role and make it work should be the one to get it. There have been swaps made in the past, as some roles just aren’t possible to switch around without a great deal of controversy. For instance, one wouldn’t cast a Caucasian to play Nelson Mandela or Malcolm X since it would likely be considered a hate crime, but casting Idris Elba in The Dark Tower was perfectly okay when the book that the movie was derived from featured a Caucasian character as the lead. Idris Elba’s a great actor, and to be certain the movie stunk to high heaven for various reasons, but not because of his presence. But this is the issue with switching out certain roles, especially voice-acting roles, based on skin color since it makes no sense and only continues to promote the divide that people don’t want to see. Kevin’s talent is what earned him this role and as I mentioned there’s nothing to be taken away from him in terms of deserving the role, but that double standard is a thorny issue that not enough people are willing to talk about at this time. Hopefully people will accept him as Dr. Hibbert, and it’s fair to think that they will since he’s skilled enough at what he does to win people over pretty quickly. It’s a switch, but it won’t be a bad one at least.