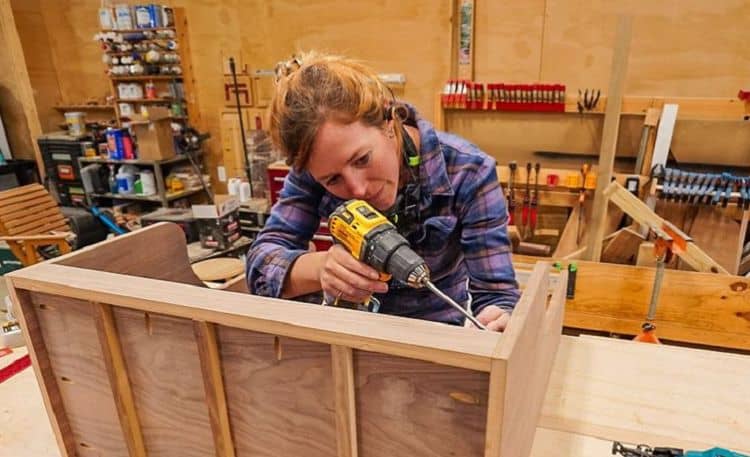 Anyone who loves a good DIY show knows precisely who April Wilkerson is. She’s the YouTube star who is making a killing with her own career now that she’s amassed so many fans. You can call her “Wilker-Do,” which is what she goes by when she’s filming. Her entire concept in life is to DIY with wood and metal, and she’s really good at what she’s doing. If you don’t know her and what she’s up to in life, it’s time to get to know her and figure out what you can about her before she’s too famous.

April Wilkerson is young. She was born in 1987, though we don’t know the exact date. She’s in her early 30s, which means she’s been involved in the DIY game for a long time. She did, after all, get her start after graduating college – which happened in 2012.

She’s a Texas girl through and through. She grew up in Texas. She went to school in Texas. She lives in Texas. Her entire life is in Texas, and that’s a situation she probably loved up until 2021 when the entire state was basically without power while covered in snow every single day for nearly a week. She might not have loved Texas at that point.

Wilkerson went to college. She graduated from the University of Texas at Arlington back in 2012. She graduated with a degree in business management, but it’s not what she’s using these days. She was a college student in the business game, but it was DIY Projects at home that really did bring her to a new level of excitement.

4. She Got Started at Home

One thing we love about April Wilkerson is that she is not an expert. She doesn’t claim to be an expert, and she’s not trying to make anyone think she is. She’s self-taught in the DIY game, and she’s not doing anything in her life that isn’t brand-new to her when she tries it out. She simply likes to share what she’s learned with the crowd, and that’s what she’s done.

The entire reason she is doing what she is doing is because she wants to see her home filled with things that were made with her own two hands rather than things that were purchased after being made by someone else. There is a lot of sentiment in that concept, and we think it’s working for her.

When she first started doing projects at home, she didn’t have any tools. She had to borrow them to get the job done, but she soon realized she needed her own. But, tools are very expensive, so she’d go to pawn shops and buy them used or get things that were being thrown out by others. It’s allowed her to amass a full collection of tools to do what she needs to do, and that’s been good for her.

8. She Loves Her Land

Home is absolutely where her heart is. She says that her life is very fast-paced, but that being home and on her own land gives her a place of peace and a sense of calm. If there is one thing that I can agree with, it’s this sentiment. Home is absolutely where the heart is, and being home should always be a place that makes you feel happy, safe, warm, loved, and just in a good place.

9. She Knows to Ask for Help

…when she needs it, of course. She also knows that she can do just about anything on her own. It seems she’s got the entire situation down well. Knowing you can do anything yourself, but knowing that it’s all right to ask for help when you need it is a big deal, and we love that for her.

10. She Recommends Finding a Passion

It’s April Wilkerson’s advice that people don’t go into life looking for something to do for money or for fame or for success. It’s all about passion. You won’t burn out on what you’re passionate about. You won’t lose interest or fail. You’ll be doing what you love because it is your passion.