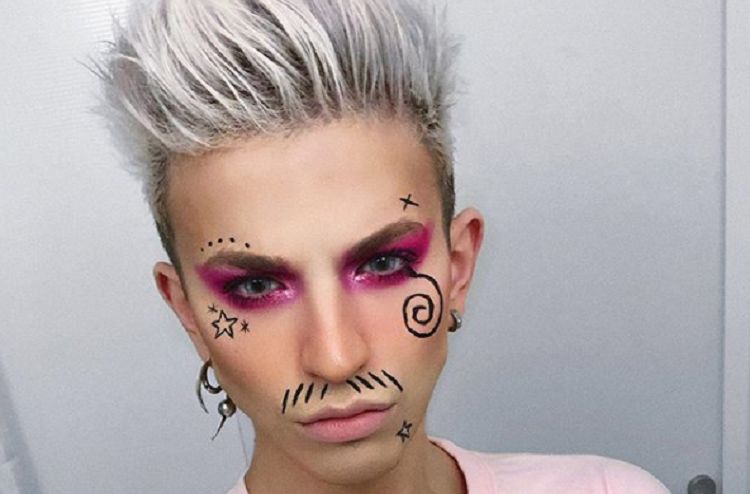 In 2018, New York drag queen Aquaria won the hearts and minds of fans the world over when she skyrocketed to victory on season 10 of RuPaul’s Drag Race. Fast forward to today, and her career’s showing no signs of slowing down any time soon. With modeling contracts, cosmetic collaborations, and chart successes under her belt, there’s no doubting the fact the age of Aquaria is here. Find out more with these ten quick facts.

1. Make Way For The Superstar

We may know Aquaria best for Drag Race, but she was already well on the way to superstardom way before RuPaul came a’calling. As well as having a six-figure Instagram following (the only RuPaul girl to have one prior to being announced as a contestant), she was a well-known fixture on the New York City club scene, an up-and-coming model, and a favorite among fashionistas like Jeremy Scott and Nicola Formichetti. “All eyes were on me,” she recalled to Them of her debut on Drag Race. “Because I am… you know, that girl.”

Aquaria started dabbling her toes in the world of fashion and makeup well before most of her peers. As a kid, she was obsessed with dressing up and testing out the limits of her mother’s makeup bag… not to mention her local craft store. “When I was little I was always into, like, face painting and whatnot,” she told Mic. “Turn me into a tiger, turn me into, like, a Power Ranger, I didn’t care. I just wanted to be, like, beat by some Halloween craft store products.”

As she entered her teens, Aquaria discovered Drag Race, and with it, a new enthusiasm for seeing just how far her early talents for face painting and dress-up could take her. “I remember when I was in sixth or seventh grade, watching RuPaul’s Drag Race, the first season, I don’t know how I came across it, but I just loved that all their looks had a purpose or something thought-out about it,” she told Mic. Determined to turn her passion into a career, she enrolled in a fashion design course at the Fashion Institute of Technology… a short-lived decision she soon abandoned in favor of pursuing drag full-time.

4. The Age of Aquaria

In early 2018, Aquaria was announced as one of the fourteen new contestants chosen by RuPaul to star on the tenth season of Drag Race. She got off to a strong start and pretty much didn’t take a single misstep from there. As well as winning three main challenges, she was one of the few ever contestants in Drag Race history never to come in the bottom two, and the first-ever to come out victorious on both the ball and the “Snatch Game”. After making her way all the way to the finale, Aquaria beat off stiff competition from Eureka O’Hara and Kameron Michaels to claim the crown.

If Aquaria was enjoying some success as a model prior to appearing on Drag Race, it was nothing compared to her success after claiming the crown. Fresh from her victory, she was awarded a contract with IMG Models, subsequently appearing in an issue of Vogue Itali and in the 2018 collections for Moschino and H&M. If that wasn’t enough, the following year she was made the face of MAC’s Viva Glam campaign. By the time of the 2019 Met Gala, such was her fame that she was invited to attend as the very first drag queen to walk the red carpet.

6. Making it in Makeup

In 2019, Aquaria took her first steps in the makeup world via a collaboration with NYX Cosmetics. The line represented the brand’s first celebrity collection and featured ten bold, eye-grabbing shades described by the brand as “high-fashion space alien meets grungy robotic angel.”

If you’re wondering about the inspiration behind Aquaria’s inimitable style, look to the fashion world. Perhaps more specifically, to two pioneering women who’ve managed to create waves as much for their ever-changing, unique styles as they have for their music. The women we’re talking about are, of course, Madonna and Lady Gaga, who Aquaria described to the New York Post as the “driving subconscious force” behind her “ high-impact, athletic type of look.”

Aquaria might not be in any danger of not making rent these days, but it wasn’t always that way. Growing up, Aquaria’s family struggled financially, while her move to New York City came with a unique set of problems all of its own. All those years of struggles didn’t come without its rewards… or its lessons. Determined that her fans don’t let their struggles kill their dreams, Aquaria is happy to pass on the pearls of wisdom she’s learned along the way. “Don’t let your upbringing, your surroundings, whatever situation you are living in, don’t let those stop you from being the greatest you that you can be,” she advised during an interview with Vulture.

Thought the girls of season 10 already seemed to be well acquainted by the time of the show’s debt? You weren’t wrong, not in Aquaria’s case at least. Thanks to her years of working on the New York Club Scene, Aquaria was already, if not BFFs with the other queens, at least familiar with their work. Take Yuhua, for example, who was the first queen to book her to appear in her own show, or Dusty, who preceded her in the title of Ms. Look Queen. Her relationship with Cracker, meanwhile, dates back 24 years, the two having been born in the same hospital on the very same day.

Who can forget Aquaria’s outstanding impression of Melania Trump in Snatch Game? Although she’s not 100% sure, Aquaria is fairly convinced the First Lady is about as aware of her uncanny performance as she is of… well, most things. “To be quite honest, I don’t know if Melania Trump is aware of a lot of things going on in her life right now,” she told Billboard. “She seems certainly tone-deaf to a lot of the issues so I can only assume she completely missed my iconic homage to her on Drag Race. But a word of advice for her, to say as simply as possible, would be to crack open The New York Times.”