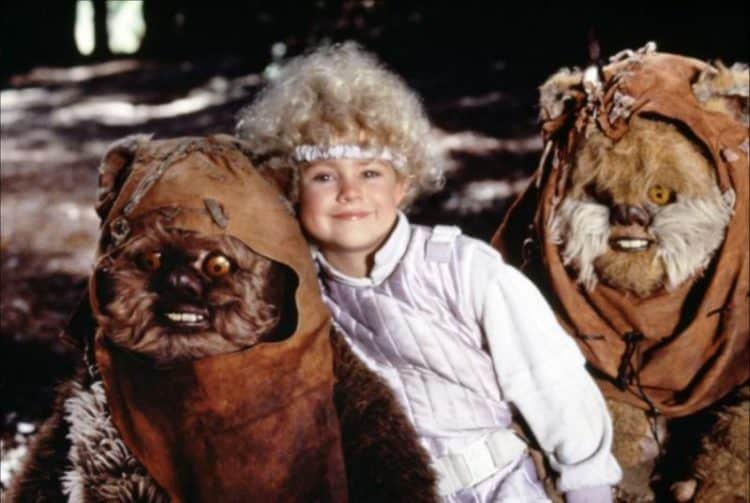 As Kevin Burwick of MovieWeb shows, Warwick Davis has a serious bias when it comes to determining if Ewoks are cooler than Baby Yoda since if you remember he started off as an Ewok in Return of the Jedi when he was only 12. He got to play the part of Wicket, the Ewok that discovers Princess Leia when she falls off a speeder bike and gets lost in the forest. But if you look at it this way, Warwick still hasn’t seen The Mandalorian it would appear so his view is even more skewed given that he has no real basis to go on other than a host of pictures, images, and memes that have been allowed to flood the internet. Even after seeing the show however it feels fair to say that Warwick will be firm in his stance that the Ewoks are still cuter. Davis had this to say about the matter:

“I’ve been trying to avoid spoilers on The Mandalorian, but I keep seeing these pictures of Baby Yoda, I don’t want to know anymore really for the time being. But Ewoks are obviously very cool, I have a certain affinity with those of course! Ewoks are cooler, they’re more cuddly. Baby Yoda is cute but he’s not cuddly, you would rather cuddle an Ewok than Baby Yoda.”

Honestly you can’t argue that vehemently with his logic since just looking at the two creatures side by side it’s easy to think that cuddling with an Ewok would be like snuggling with a big, living pillow while The Child, aka Baby Yoda, might be a little more leathery of skin just from appearance. Caitlin Chappell of CBR has more to say on this subject. There are other reasons why the Ewoks would be a little more desirable as well, especially since for the most part they’re not seen to be Force-sensitive. Think back to when Cara Dune and Mando were arm-wrestling and The Child thought that Cara was hurting his benefactor. In that moment The Child tapped into the dark side of the Force on instinct to try and protect Mando despite not knowing the full context of the situation. In that regard The Child is a lot less appealing since his temper tantrums could be a lot more destructive than anything an Ewok could ever be capable of. Just think about if The Child has a serious problem with anything that he can’t understand and doesn’t know how else to express himself as he grows older. It’s very possible he could end up tearing Mando’s ship apart without much effort.

One being downside of the Ewoks though is that they appear ready and willing to roast pretty much anyone that they can’t figure out or that they deem as a threat. They were ready to put Han, Luke, and Chewie over the flames until Luke used the Force to get them out of a jam. Ewoks might look cuddly and cute but they’re war-like little buggers that can fight when the going gets rough and obviously know how to defend themselves. Were the Imperials any more knowledgeable about the Ewoks in Return of the Jedi however the furry little critters might not have been as instrumental in helping to secure and then destroy the shield generator. Davis has undoubtedly stirred a hornet’s nest with the remark that Ewoks are cooler than The Child since honestly a lot of people have become invested in the little green guy since November and once the toy sales really ramp up you can imagine that it’s only going to become an even bigger sensation. For someone that’s been around Star Wars for so long one might think that Davis is being just a little bit jealous in his approach towards the matter, but his loyalty towards the creatures that he helped to make famous is understandable. After all, at one time Ewoks were considered THE cutest creatures in Star Wars since there were really no others to take their place. That of course was until the Porgs showed up in The Last Jedi, then The Child, and then Babu Frik of all characters. Why anyone thinks that Babu Frik is still in the running for being cutest is still kind of confusing, but oh well.

At the end of the day they all belong to the same franchise so fighting over who’s more popular than who is kind of silly to be fair since they’re all going to get a very big deal of attention as the franchise continues on. Honestly though as things continue to progress one knows that eventually The Child will have to head into exile for a while to explain his lack of a presence in the current trilogy, or something bad is going to have to happen. So the ‘who’s cutest’ argument is going to become kind of ridiculous after a while since the story is already leading to something kind of dark. Kayleena Pierce-Bohen of ScreenRant has another contribution to make to the discussion.

Emperor Palpatine Quarantines Himself in the Villain Pub

Whatever Happened to Aaron Dozier?