Home
Anime
Are We Ever Going to See a Konosuba Season 3? 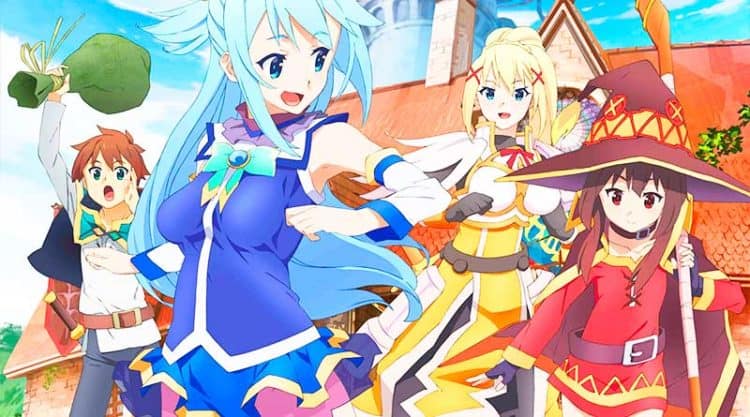 Konosuba is another graphic novel series written by Natsume Akatsuki. The basis of the story sounds like something that you might have in your dreams, or maybe your nightmares, depending on your point of view. Basically, it involves a young boy who dies and then travels to another dimension. In that dimension, he has to fight a bunch of monsters and he gets a bunch of other entities together in order to help him accomplish his goal. He ends up with a team that consists of a crusader, a wizard and a goddess. While each graphic novel focuses on a slightly different aspect of the overall story, this is the main story line that runs through all of it.

It didn’t take very long for the story to start becoming very popular with people that were reading the novels, and in relatively short order, the story was adapted for a regular series of the same name. There’s been a lot of talk about a potential season three of the series, which proved to be extremely popular during its first two seasons. Fans are in something of an uproar right now, both excited and full of dread. Previously, actors that had done voice overs in the first two seasons had hinted that there would be an up-and-coming project in the near future. Obviously, this got fans very excited. The next thing you know, a movie based on the novels is going to be released, scheduled to come out sometime next year. That got fans the wondering if a season three would ever happen, for a couple of different reasons.

First and foremost, it only makes sense that if a movie is being released next year, there probably isn’t going to be a season three in the immediate future. It just wouldn’t make sense to release both of them at the same time. However, the thing that really got fans educated was the fact that the author of the novels was rumored to have said that the series itself was officially cancelled. Keep in mind, this is a rumor that’s been circulating on the internet so you can choose to believe it or not believe it. You know that most of the things that you read on the internet may or may not have any basis in truth whatsoever. So far, nobody’s ever really been able to nail down when or where he supposedly said this, only that it was supposedly said.

However, what is known is that a different studio is being used for the movie than what had previously been used for the first two seasons of the series. Once again, that made fans wonder if there was an issue involving some type of communication breakdown between the creators of the series and the studio that would ultimately result in cancellation of the series. Many people put that fact together with the rumors that were circulating which were supposedly said by Akatsuki and the next thing you know, people are absolutely convinced that the show has been cancelled.

If you’re thinking that it’s cancelled, you can take heart in the fact that it has not been cancelled, at least not officially. As a matter of fact, there’s really not much information to support that the show will continue or be canceled. There’s just not that much information about it at all. Actors that participated in the first two seasons have continued to hint that more projects are coming but they’re not saying exactly what those projects are or when they will happen. In addition, the studio that was responsible for releasing the first two seasons of the show isn’t saying anything, either. The same basically goes for the studio that’s responsible for the movie. The only thing that they’re commenting on is related to the movie and they’re not making any statements about the series whatsoever, nor should they. Aside from the rumored statement from the author of the books about the series being canceled, nothing concrete has been said by him either. Since no one can definitively determine whether or not he actually said this, the jury is still out about a season three.

For now, fans will have to look forward to the movie and hope that season three comes at some point in the future. Perhaps more details will be released about it later on. Right now, everyone in question seems to be focusing on the movie and nothing more.