Home
Movies
Are We Going To be Seeing a Young Guns 3? 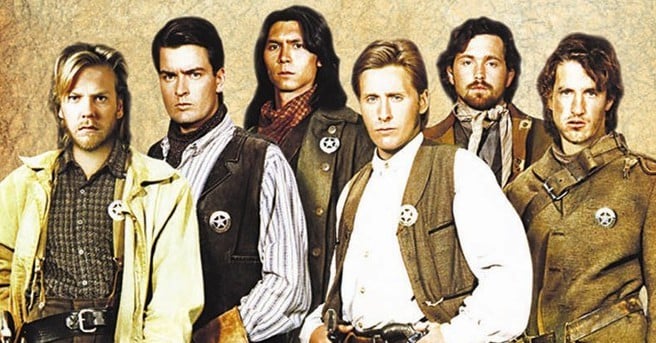 If anyone else’s brain hasn’t seized up trying to think of how this could possibly happen then it might have already happened, I’ve gone crazy enough to slip into a parallel dimension where a Young Guns 3 could have any possibility of happening. Even more than that, this is building off of the idea that Jose Chavez y Chavez is still alive, and so is Billy the Kid. In the 1990 movie Young Guns II, there’s no doubt that Billy, played by Emilio Estevez, survived after Pat Garrett tried to kill him, but was still discredited by the end of the movie, much as it happened in real life. But Chavez was gutshot, he stumbled out to the cemetery, and he fell to his knees, hitting the dirt soon after that as the spirit horse raced by in the next frame, signaling the end of his life. The only other person to survive was Henry William French, played by Alan Ruck, and it’s kind of doubtful that he’d be coming back simply because, well, pick a reason. But even if Chavez was alive and somehow slipped away, the term ‘Young Guns’ wouldn’t really apply any longer, and Billy the Kid would become entirely fiction at this point since if there’s any mention of the man in history it’s been hidden away better than any secret that’s ever been kept, since Brushy Bill Roberts, the man that claimed to be the Kid, was discredited near the end of his life.

If there’s a note of frustration in my writing it’s because this is what happens when well enough can’t be left alone and people feel the need to keep going back to muck with a story that’s already reached a decent conclusion. In the first Young Guns, the facts were chopped up and spread across the length of the movie in a manner that mixed history with fact, and it was good. It was a great story, even if it wasn’t entirely factual, and it entertained the audience in a manner that made some people actually want to go out and research what really happened. What they were bound to find was that Billy the Kid and his bunch did exist, and there was more history to all of them than the movie really went into. But what was likely disappointing was that the fight that took the lives of all but a few of them was definitely different since the way it was presented was far more cinematic. The truth is hardly ever as exciting or as cut and dried as a movie will make it appear. Young Guns II didn’t get the same kind of attention that the first movie did, but it was still a lot of fun since there were a few other characters introduced and it was made clear that Billy was now a known man and was doing his best just to stay alive. Again, history didn’t exactly get highlighted that often as fiction was a lot more fun and was allowed to use history as it saw fit to highlight certain portions of the story that were in fact very true. But again, it was a movie, something made to entertain the public, who might or might not have any knowledge of what happened back then thanks to what they could have read in the history books.

I’ll admit to being one of those that didn’t want the story to end. I wanted to see Billy, and Chavez, and Doc, and the rest of them go riding around for a while being the outlaws that they’d become, but that wasn’t to be. The first movie had an ending, the second movie had an ending, and despite Lou Diamond Phillips thinking that Chavez’s ending was ambiguous, the character spoke the words that indicated when the spirit horse rode, then it would be over. The spirit horse rode on through, Chavez, who had survived more than a few situations that should have been the end of him, was dead, and bringing him back to life is bound to feel like a rush of hot spittle being dribbled on the story that so many have come to love in an attempt to bring back something that was over and done with. As far as we know, Young Guns doesn’t exist in the Marvel or DC universe, meaning that resurrection isn’t about to happen and isn’t part of the story, since it would be stomping on history as well as the movie in general, and if the goal is upset the people that happen to care about the movies then bringing Chavez back to life is going in the right direction. He’s one of the characters that we happened to love, but trying to bring him back, to create a Young Guns 3, is a serious kick in the teeth just waiting to happen.