Home
Movies
Are We Going To See a Joel Schumacher Cut of Batman Forever? 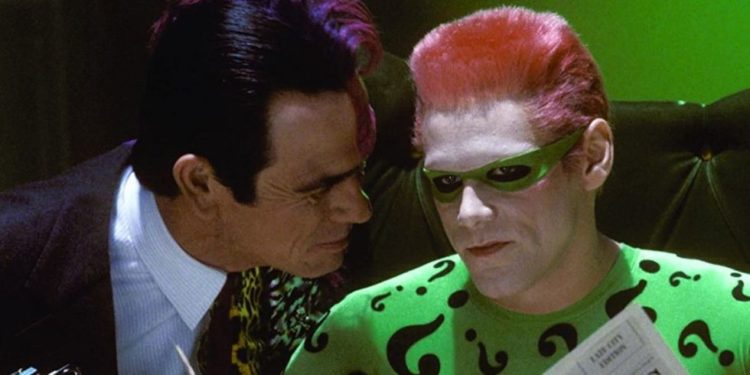 Welcome to the aftermath of giving in to the demands of the fans, since the Schumacher Cut is now being pushed as fans have decided that they want to see this ‘darker’ version of Batman Forever that apparently exists according to the writer, Akiva Goldsman. It’s becoming more and more apparent that director’s cuts are a trend these days than an actual need or desire. Batman Forever wasn’t exactly a prize when it came out since it became so over the top and goofy that one could barely watch it without thinking about whether or not Jim Carrey was going to bend over and attempt to concoct a riddle with his backside. Plus, Tommy Lee Jones looked as though he’d had frosting or playdough adhered to one half of his face, and the acting was, like it or not, horrible. But a director’s cut apparently would have made it all better since from Goldsmith’s point of view the movie would have been much darker and less goofy if it had been allowed to run with the original version. But since the marketing department was trying to target kids, as had happened since Tim Burton started the whole thing off, things had to change and the goofy nature had to be adhered to. That’s a nice excuse and all, but even a director’s cut of Batman Forever doesn’t sound likely to make this movie any better. People are thinking that there’s a renaissance coming if the Schumacher Cut is allowed to move forward, and to be honest, it sounds less like a rebirth than an attempt to raise something that should remain where it is. Batman Forever was the beginning of the lunacy that nearly undid Batman in the movies, so maybe it’s best to leave the idea where it is and just call it good.

But that doesn’t appear to be what people are hoping for since the whole idea of calling for the Schumacher Cut is enough to make a person roll their eyes and wonder when good sense is going to come back to the movies. Those that insist that the Snyder Cut was an improvement have yet to really clear their eyes of Snyder’s vision, but it’s fair to say that some still want to think that pining for a director’s cut is the best way to go about things, since to be realistic the cut did finally come to HBO Max. So it’s fair to say that this one might as well since one thing that’s been made abundantly clear is that if enough fans raise their voices loud enough and continue to pester studios about one movie or another that they’ll get what they were hoping for. The downside of this is that no matter how different it is, it’s not bound to be that much better since there might be more about Bruce Wayne’s psychosis and it might show how Two-Face broke out of Arkham, but in terms of quality, it’s easy to think that it’s going to be almost painful to watch the movie. Plus, there’s talk of Bruce fighting a man-sized bat, which would likely be a dream sequence since otherwise it would take the silliness of the plot to another level since really, most of this movie is just one gag leading into another. It’s not the worst movie ever made, but in terms of the Batman mythos, Batman Forever isn’t exactly a good movie. Bringing out the director’s cut isn’t really going to change that for a lot of people since it’s the same movie with added footage and a bit darker tone.

Trying to understand why some people hold onto older movies isn’t difficult, and trying to understand why some people still enjoy less than stellar movies is just as easy since everyone has their favorite movies, TV shows, music, etc. Just because it doesn’t hold as good of a memory with someone else doesn’t mean that it needs to be ignored or left out of the loop entirely. But calling this a renaissance moment is like calling an expulsion of gas a sweet melody. Some might think so, but a lot of people tend to disagree. Batman Forever is one of the least liked Batman movies of all time after all, and a lot of people might give a hard pass to see another version released to HBO Max. Time will obviously, but it does feel as though any and every opinion levied against this idea is going to be disregarded if HBO Max decides that they want to see what else this movie was worth. It doesn’t sound like a great idea, but then again we all know how to simply not watch it if things come to that, so problem solved. But if it does well, then oh well.