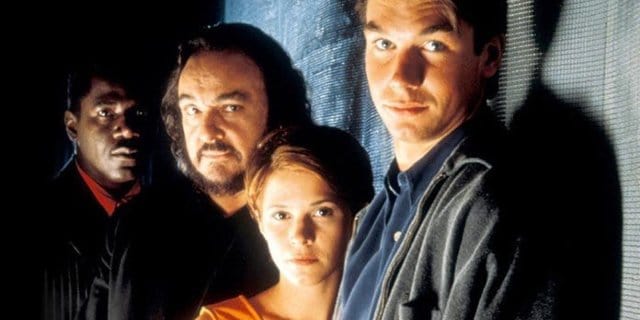 Does anyone remember Sliders? As Morgan Jeffrey from Digital Spy has reminded us it came out back in 1995 and therefore it’s kind of hard to really say whether anyone remembers it or not, but it sounds as though it might be trying to make a comeback. The only issue at this point is to find out just who owns the rights to it and how it can be made interesting enough to bring back to the modern era. This doesn’t seem like it would be all that hard since the original story was actually quite entertaining. Those that remember could possibly agree since in some ways the show was almost like Quantum Leap, with a few big differences. The individuals affected did travel in a very unconventional way, using an inter-dimensional wormhole, but they didn’t end up the bodies of other people. Instead they were always themselves when they showed up and eventually had to set something right before they could open another wormhole and make their exit, hopefully towards Earth Prime, or in other words, the world they came from.

The effort of having to fix a problem while they’re in these alternate worlds is very much like Quantum Leap, as is the idea that they would have to eventually move on. But once again there are differences. If they didn’t make their exit in time they would be stuck on that alternate world for close to three decades before they could open another wormhole to escape. And in the case of some of these alternate earths there were some that were so strange that they made a person think about what might have happened if evolution had gone very differently, or if society had formed in an entirely different manner. From just a couple of episodes it was easy to notice small differences, such as a red light meaning go at a stop signal, all the way to young people having the most important place in society while others were subservient in some way. Sliders was a show that did in fact make you think and was full of imaginative plot points and twists that allowed it to stick around for three seasons before it went off the air. Eventually it would go to the SciFi Channel and last another couple seasons, but it’s been a while since it’s been seen.

Figuring out who owns the rights would be the first big step in getting the show back on the air, while getting the cast arranged would be the next. David Yates from Tvweb has gone on to state that it sounds as though Jerry O’Connell and Jonathan Rhys-Davies are already on board, but as far as the rest of the cast it still seems up in the air as to whether or not they’d be interested. To be honest these two might be enough since quite honestly they were among the most interesting of the cast members and the ones that seemed to be most prominent a lot of the times. With Davies’ advancing age, he is in his 70s after all, it might be that he’d be more of a mentor to the younger cast members. It might even be that the original cast would be more along the lines of teachers or the old crew that got lost or something else to create a new plot twist that could bring the show back to prominence. At this time reboots and remakes are all the rage so finding another way to bring Sliders back to the public wouldn’t be a huge issue, it’d be deciding among the many different ways there are to do it.

The whole idea of slip-sliding through dimensions is nothing new to TV or cinema but it’s always kind of interesting to guess at what could be waiting on the other side and just one might go about it. Sliders did provide another show that was updated for the times and was able to ask all the right ‘what-ifs’ that people wanted to know about, but there’s always bound to be more. Given the political mood in this day and age it would be interesting to take a look and see what a world in which Hillary Clinton as president would look like, or perhaps see if there’s a world where terrorism has created the next apocalypse. There are just too many ideas to sort them out in one sitting, especially with the idea that Sliders is capable of taking viewers through a new one every episode. And what if someone from an alternate earth unwittingly joins them in their travel? Imagine the mess that could create, or the level of intrigue. There’s a lot to think about when it comes to bringing Sliders back, so long as they find out who owns the idea and rights to the show and can interest the rest of the cast and the audience in what’s to come.