Home
Castle
Castle Kicks Off Part 2 of Season 8: Are You Ready for “Tone Death”? 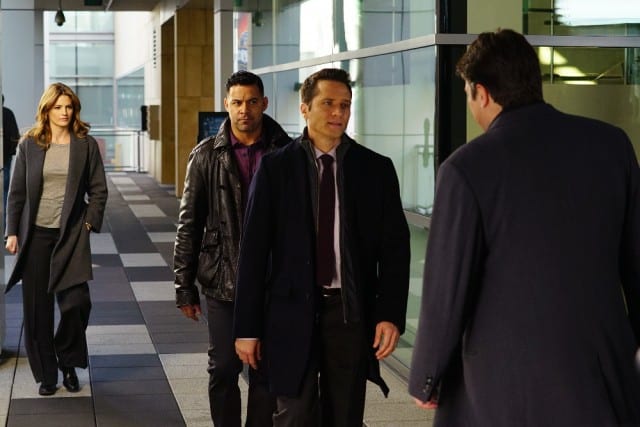 Next Monday ends the winter hiatus for ABC’s Castle and the episode returning is titled,Â “Tone Death.” It was a rough first half for the show, but the hope of many is that with the newly made NYPD Captain Kate Beckett (Stana Katic) no longer estranged from her famous writer not so famous P.I. husband Richard Castle (Nathan Fillion) the second half will be much better! Â  Finally, the thing that has in the past made this show a success will be back: Castle and Beckett together again solving crimes!

We saw them in bed together in the first promo and the promo pictures certainly suggest that we’ll be seeing more of them as a couple in the overall episode. Â There are eight of them – and four have Castle and Beckett in the shot together! 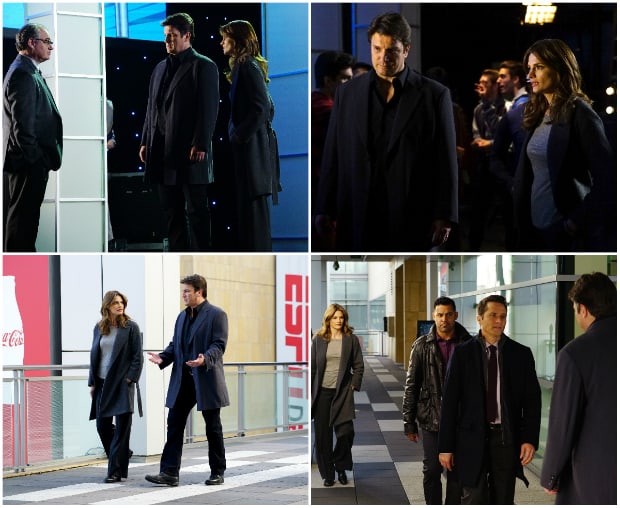 There haven’t been many of Â these kinds of promo shots in the first half of Castle season 8, in fact many don’t feature them together at all. Â These are great! Yet, after getting excited by the photos, the ABC story synopsis gave me pause.

When a body is found in the theater of Martha’s latest show, Castle and Beckett’s investigation leads them into the unexpectedly dangerous world of competitive a capella. “High School Musical”’s Corbin Bleu guest stars.

I want to believe that Castle is returning to its roots, but language is a nuanced thing. Â I’ve been a Castle viewer since season 2, and have reviewed it since season 5. Â The phrasing in the synopsis gives me pause. Â “Castle and Beckett’s investigation leads them…” Â In the season’s prior to this the phrasing has always been “Castle and Beckett investigate.” Â The former makes it not about the pairing, but the case. Â The latter puts the emphasis on, well, Castle and Beckett. Â  It’s a minor thing by itself, but in the context of everything else going on it ties into this major shift from the show’s original focus .

In case you’ve forgotten what that focus was, let’s go back to the source: Andrew W. Marlowe the person who created Castle and was the showrunner for six seasons. Â The show first started in January 2009 (it was a mid-season replacement.) Â This is fromÂ www.thefutoncritic.comÂ that September.

JH: In the writer’s room what comes first? The case of the week or the character stuff with Castle and Beckett? Where do you start?

In this clip from the fall 2010 PaleyfestÂ Castle executive producer Rob Bowmen is also very definitive about what makes the show tick – and how not just any actress could have played Kate Beckett. Â For one he states than Fillion read with one hundred and forty other actresses before they found Katic. Â Then he says this:

There’s no show without someone that doesn’t have her…obvious assets – whatever that intangible recipe that makes up the chemistry, which is…lighting in a bottle

Did this idea that the center of the show was Castle and Beckett come through to those watching? Yes. Â Robert Bianco, a reviewer for USA Today summed up the general consensus best in his initial review of the series back in 2009

None of the episodes is likely to keep you up at night puzzling out the intricacies of the mystery, but they won’t bore you or insult your intelligence. Castle exists to exploit the appeal of its stars and the amusing byplay between their characters, and it does that with admirable efficiency.

In 2011, this is what Variety had to say about Castle:

Impact: Not only has Marlowe managed to make a cop procedural last for more than one season on ABC – a massive accomplishment in itself – but rather than just create a show about solving mysteries, “Castle” is at its core a romantic, funny and sexy drama that’s shattering the “Moonlighting” curse every step of the way.

Finally, there’s what viewers thought of the show. Â Every viewer is going to take away something different, but if you want a snapshot idea of what viewers felt the focus ofÂ CastleÂ was from the start you can go through the 14 pages of reviews by viewers on IMDB . Â What is by far the number one point? The relationship, chemistry and interplay between Castle and Beckett.

Even as the show and characters evolved, the love story of Castle and Beckett has, until recently, stayed at the core of it. Â Even after the end of the wonky season six finale Marlowe makes the point that Castle has been telling a “long-arching love story. Â WhenÂ Castle season seven started drifting from this premise – and drifting down in the ratings – it quickly dropped the Castle P.I. story arc and began to get back to being about Castle and Beckett as the story’s center.

In one of their last interviews before it was announced they were leaving the series, Marlowe and his wife, Terri Edda Miller -Â who has at different points been a writer, producer & executive producer for Castle -Â spoke about their vision of the show’s future. Â This was in answer to the idea of having Kate Beckett killed off because of the contract negotiations that were going on at the time:

“I think for us that’s off the table. For us we’ve been telling a love story for the last seven years,” Marlowe explained, with Miller adding, “I think that would be a huge betrayal of our fans.”

So if Beckett’s safe, where will the dynamic duo be 10 years down the line?

What’s the reason for hammering in the point of what Castle started as and what it has been prior to this season? Â  Because it needs to be clear what has been, and what’s happening now. Recently, Fillion did a couple of interviews in Spain to promote the 8th season starting up there. Â  This article is in Spanish, but Google translate gives us the English version (Plus I checked in with people who can read Spanish.) You can read the full article in Spanish, here.)

Fillion says that season eight is the best thing for him and the show’s fans because the new showrunnersÂ Alexi Hawley and Terence Paul WinterÂ love the show and have “no interest in making it their own.” Â  Well, that point is disputable. Â These are the same showrunners who in September GMMR interview said they, “really wanted to use the opportunity to re-pilot the show a little bit” Â However, the thing that really caught my attention was his answer to the question about the fundamental plot thread of Castle:

At first the relationship was what I thought he kept alive the series. It keeps the audience waiting. If given what the public wants, stop waiting. I think the way this series reflects the life is very successful with its fantasy: a writer of mystery teams with a homicide detective and solve crimes. Â A couple of classic researchers. Â That’s the bottom line rather than the love story. ‘

That shift I mentioned in the synopsis for “Tone Death” – emphasizing the investigation rather than CastleÂ & Beckett – makes complete sense in the framework Fillion is describing, Â It also fits with Hawley’s idea of “re-piloting the show. Â After all, the pilot is where the premise is set.

Now, shifting a basic premise doesn’t mean the episode won’t be fun, or that the show is awful. Â Although most of the feedback on the “Lokstat”Â plot used to split up Castle and Beckett has been that it was contrived and illogical, that split was somewhat repaired in the winter finale. Â  Castle is returning with Castle and Beckett back together – but secretly. Â This is what has given some viewers hope that things could be getting back to the premise that has sustained the show for 7 seasons.

A look at how some of this Castle and Beckett charade of a breakup works doesn’t really fit with the idea of things going back to normal though. Â We know that Captain Beckett will slap Castle, at her place of work, in public…. (I’ll leave my thoughts about that for the review once the episode airs.). Â Now there’s this Castle “Tone Death” sneak peek Â to give viewers some more information.

So…detectives Kevin Ryan (Seamus Dever) and Javier Esposito (Jon Huertas) are supposed to believe Castle cheated on Beckett and let him still be in on an investigation. Â Do you remember how they were in the season three premiere when his biggest crime was not calling? Â This is meant to be a comedic slapstick kind of scene, but because of what goes on before they enter the apartment it falls flat. Â I can’t get over that they don’t flat out kick him to the curb right there. Â “Tone Death” may be a more appropriate title for this Castle episode than the writers intended. Â The version of Castle returning Â February 9th at 10pm on ABC doesn’t hit the same notes as before and some of these new notes don’t sound pretty, at least not if you’re expecting a song similar to what you’ve heard before.

Here’s the bottom line: although “Tone Death” does promiseÂ Â some sexy times and witty Caskett banter, in general it doesn’t sound like the series is going back to its original course. Â If that’s what you’re expecting from the second half of Castle, be prepared to be disappointed. Â (The episode airing after this, “Witness for the Prosecution” thus far has 1 episode promo pictures featuring Castle and Beckett together.) Â On the other hand, if you’ve been enjoying the new Castle, you can expect more of the same – minus the breakup, which I think we all can agree is an improvement.