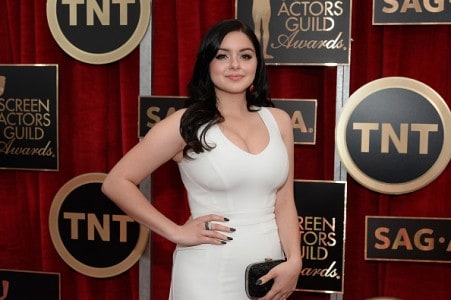 Probably one of the greatest sitcoms of all time, Modern Family is simply brilliant. The casting, the script, the humor; it is always on par, always stellar and it keeps us laughing every Wednesday evening. What we love even more is that the casting department did the most amazing job casting the kids in this show. They might be young, but they are good at what they do. We particularly love Ariel Winter in her role as Alex. She’s sharp, witty and she’s an amazing actress, but tonight she’s going to look a little different than she has in the past when she debuts her new breast reduction for the first time on the show.Â  Here are five things you may not know about Ariel Winter.

She began her career in commercials

She’s most recognized for her role as Alex Dunphy, the only smart child in a family of hilariously silly kids, and she is good. However, she used to do commercials for Cool Whip when she first started out. She was only 6-years-old when she got her start in the commercial business.

It became apparent in 2006 when her older sister filed paperwork to become her legal guardian that Ariel Winter was not being treated well at home. It was announced that her mother was verbally, emotionally and physically abusive toward her — but she’s overcome her issues and does not view herself as a victim.

The 18-year-old actress has lived her entire life struggling thanks to her naturally large chest, so she’s had them reduced. She showed off her new, smaller chest at the SAG awards in 2016 and she looks amazing — and very happy. She went from a 32 F to 34 D.

Not only does she not have a relationship with her birth mother, she actually ‘divorced’ her, effective 2014. It’s a decision she felt was right for her after the way her mother treated her growing up.

Humbled by all the positive feedback about my scars.Embrace who you are,love every bit about you,because that is what makes you..well..youâ¤ï¸

She’s proud of who she is

We love a girl this age who is not afraid to show off her body, her scars from her surgery and how she’s been affected in her life to this point. She’s been open and she’s proud of who she is, and we love that.