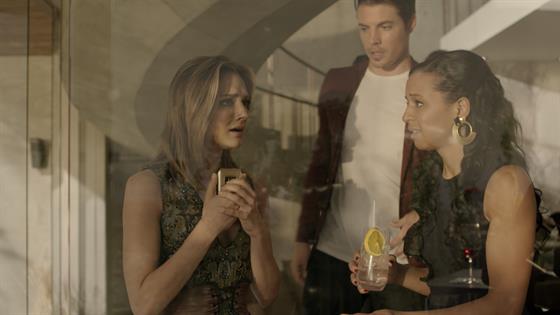 The Arrangement wanted to make a show with a strong commentary on the highs and lows of life in Hollywood. Glitz and glamour comes at a price, but no one told Megan Morrison she would need to be so on guard. Megan has tried to keep focused on integrating herself into Kyle’s world, but should have been paying more attention. It’s not just about the new people in her life who could hurt her, but the people she believed she could trust. More disturbing than that is the fact that Megan might have to worry not just about her career, but about her physical safety.

It all starts when Kyle and Megan co-host a fundraiser at Kyle’s house. Megan’s friends Hope and Shawn come along for the ride, but Hope doesn’t fit in as well into Megan’s new world. It gets so bad that Kyle has to send her home so she doesn’t make a fool of herself even more in a drunken stupor. In the meantime Kyle, Terence, and Deann have to save Megan’s career from ending before it starts. Even before random phones start ringing alerting them to a bigger problem, Kyle has to step in to stop the director from replacing Megan with a more well-known actress. It’s fantastic that he puts so much faith in the woman he intends to spend the rest of his life with, but he probably should have read the morality clause in Megan’s contract before the world got ahold of her leaked nude photos.

This is where the commentary on cruel reality is showcased. Celebrities are prime targets for mean and even violent attacks, but Megan isn’t used to it. Now every inch of her is out there for the world to see, except they know nothing about the woman inside. The bigger problem is that neither does Kyle. He makes a grand show of whisking Megan away to the woods to disconnect from the chaos, but refuses to open himself up to her. Neither one of them feels 100% real with each other. Yet they think the magic answer to that is saying they love each other. This show wanted to make a statement about the speed of Hollywood relationships, and there’s definitely some truth in this applied to Kyle and Megan.

In order to diffuse the media blitz, Megan and Kyle decide to make a statement with a nude photo of their own. The both of them in their birthday suits in the woods in solidarity definitely makes a positive statement to the public. Nevertheless, Megan is out of the movie. That Kyle agreed to this move puts a huge rift in the relationship they just repaired. Despite the welcome aid offered by her manager/mama bear Leslie, Megan puts on the performance of a lifetime during an interview for her and Kyle’s photo shoot in the woods. Megan may have put too much faith in this new relationship, but it doesn’t look as if she can completely trust anyone. Hope is one of her oldest friends, but one jealous look at Megan’s new life and Hope decided to take matters into her own hands. Fame really does show you who your friends are, even the ones you thought would never leak nude photos of you. Deann tries to make Megan believe they will be power women together one day, but we still don’t know how much of what Deann says is completely self-serving. Megan certainly can’t trust Terence, since the LAPD is knocking on his door about a missing woman he told his staff to ‘take care of’.

Can Megan trust anyone, or must she depend only on herself in this new phase of her life?

Kyle and Megan take two steps forward and one step back on this week’s episode of The Arrangement.