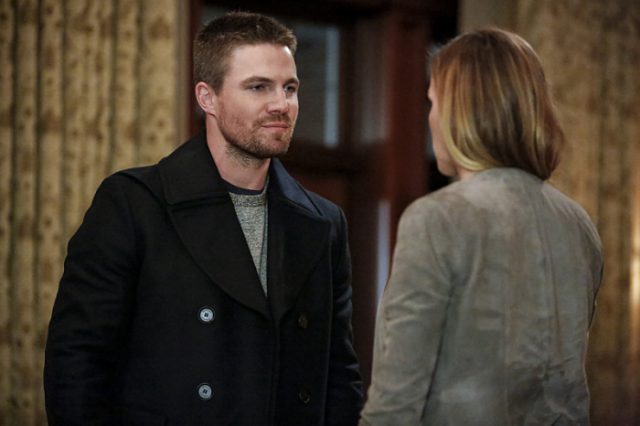 100th episodes of TV shows are always a time for celebration, to show just how far the series and their characters have come since the beginning while also remembering all the history that comes with a run that long. Tonight’s 100th episode ofÂ ArrowÂ was no exception to that rule, as it illustrated not just how much Oliver, Thea, Diggle, and the rest of the show’s main characters have grown and evolved since they were introduced back in the series’ pilot but also took time to reflect on everything that has transpired since Oliver’s return to Star City nearly five years ago. “Invasion!” utilized both flashbacks and full-blown reappearances from Â some of the show’s most important figures, such as Moira, Laurel, and even Tommy.

However, Arrow‘s 100th episode was more than just a celebration of what has happened within the show and its universe. Thanks to the crossover nature of the installment, which included characters fromÂ Supergirl,Â The Flash, andÂ Legends of Tomorrow, the episode also served as well-earned recognition for everything that Greg Berlanti and his creative team have achieved in the four-plus years sinceÂ ArrowÂ premiered and for all the TV series, characters, and comic-book moments that have spawned from the enormous success of The CW’s first, original DC Comics show. In many ways, this was an episode aboutÂ Arrow‘s current and future legacy.

But in addition to all of that, “Invasion!” was also a damn fine hour of television, one that used the tried and true “dream world” concept to tremendous effect, as we watched Oliver, Thea, Diggle, Sara, and Ray struggle to break free of the illusion that the Dominators had stuck them in. Unlike the real world they live in, the universe that the Dominators created didn’t have loss or tragedy; Robert, Moira, Laurel, and Tommy were all still alive, and it appeared that, on the surface, Oliver had everything he wanted: a relationship with his parents, the love of Laurel, and even the approval of Quentin. However, as we’ve seen so many times before in these types of episodes, what seems too good to be true always is, and it’s not too long until Oliver, Thea, and the rest of the group begin to see the cracks in the Dominators’ world. As good and as happy as their lives seem now, they start to understand that none of it is actually real, and while it’s an appealing option to remain in this dream-like state, it wouldn’t be better than truly living.

That conflict over staying or going is really showcased in Oliver’s interactions with Thea, as the two of them have dealt with the most loss throughout Arrow‘s four-plus seasons and therefore have the most to gain by choosing to stay in the Dominators’ world. In fact, during the episode’s best scene, Oliver even leaves Thea behind so that she can find happiness and peace in this fantasy, which has the Queen siblings talk about everything they’ve sacrificed and everyone they’ve lost over the course of their journeys to protect Star City. It’s an incredible exchange between Thea and Oliver, as she suggests that this new reality could be a reward to Oliver for all the sacrifices he’s made over the past five years, but as Oliver tells her, he never made any of those sacrifices as The Hood or The Arrow or even as the Green Arrow because he thought he would someday be rewarded; he did it all because he believed that it was the right thing to do.

There’s such incredible emotion, so much pain and longing and hope, throughout Oliver and Thea’s short conversation, and it’s easily some of the best work that Stephen Amell and Willa Holland have ever done onÂ Arrow. Despite the heightened circumstances of the situation, both actors make Oliver and Thea’s words and actions feel so unquestionably real, and when Thea urges Oliver to stay and then reemerges by his side as he and the rest of the group fight against enemies from their past, it all feels honest and earned because of how strong the writing is for these characters and because of how uniformly fantastic the performances are.

As several different characters mention throughout tonight’s episode, Oliver Queen doesn’t have superpowers. He can’t run as fast as Barry or fly like Supergirl, but the greatest strength he possesses, something more powerful than any type of ability or technology, is his determination. ThroughoutÂ Arrow, we’ve seen Oliver get discouraged or become hopeless; we’ve even seen that type of behavior from him early on in Season 5. However, no matter how much he sacrifices or how high the odds are stacked against him, Oliver always finds a way to keep fighting, to keep saving people’s lives, and to keep pursuing his mission of protecting his city. “Invasion!” acts as a reminder of not justÂ Arrow‘s history but of how the show’s titular hero will always continue to be a hero, whether he’s wearing his green suit or not.

What did everyone else think aboutÂ Arrow‘s 100th episode? Comment below and let me know.