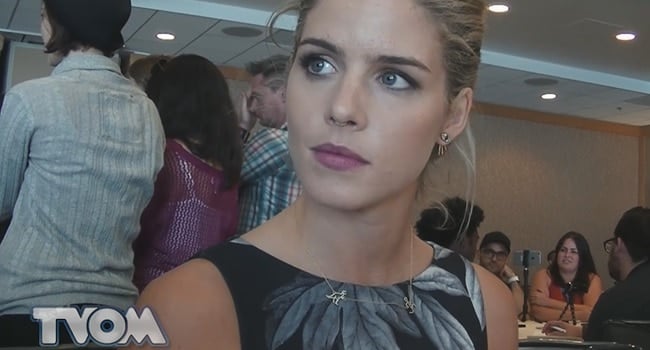 At this year’s San Diego Comic-Con, TV Overmind participated inÂ the ArrowÂ Press Room with several outlets to chat with the cast and crew behind the show to get some insight into what is coming in Season 5. Emily Bett Rickards, who plays Felicity Smoak, was one of the great talents we spoke with as she teased what’s happening in the 5th season and what’s coming up for Felicity.

-What she hopes to see in the 100th episode of the series, while taking place in the 4-show crossover.

-Whether or not we will see Felicity back at Palmer Technologies after the events of last season.

-The chances of seeing Felicity’s father again and what Rickards hopes for the characters to do this time around.

-Felicity’s emotional state after the major events of the last few episodes of Season 4.

-How Felicity would react to seeing the evil version of her friend Laurel Lance (the Black Siren of Earth -2).

-What she hopes to see with the world of Supergirl coming into the Flash/Arrow/Legends-Universe.

Make sure to check out our other ArrowÂ round tables from San Diego Comic-Con as well: Stephen Amell (Oliver Queen/Green Arrow).