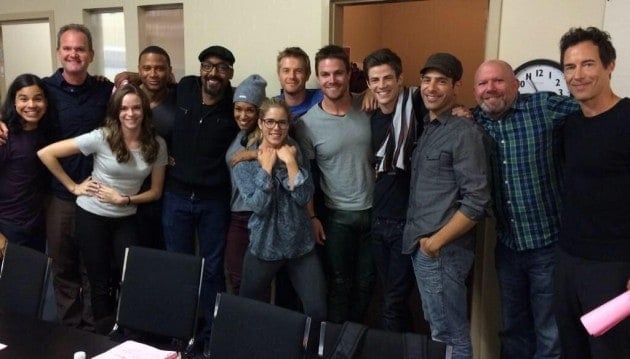 Next month, when The Flash premieres and Arrow returns for season three, TV fans are going to have two great superhero shows to watch, asÂ The FlashÂ will speed on to Tuesday nights on The CW and Arrow will anchorÂ Wednesdays like it has the past two years for the network. However, in the eighth episodes of both series this season, we will be lucky enough to enjoy a two-hour crossover episode event, and now we have our first look at it.

It’s a pretty great time for television if you’re a DC Comics fan. Not only does this fall see the premiere ofÂ The FlashÂ but also of two other DC Comics shows, Fox’sÂ GothamÂ and NBC’sÂ Constantine. Plus, The CW will have another DC-inspired show when Rob Thomas’sÂ iZombie, starring Rose McIver (Once Upon a Time‘s Tinkerbell), arrives on the network at midseason, and there are series for Supergirl, Teen Titans, and Lucifer all reportedly in the works as well.

TheÂ FlashÂ premieres on Tuesday, Oct. 7, at 8 p.m. on The CW, with Arrow‘s third season beginning the night after it, Wednesday, Oct. 8.

We crossed the streams. #Flash#Arrow#ImWearingTheArrowPantspic.twitter.com/EW1B5zHUDz