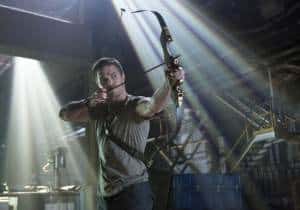 The CW has been without a superhero show for a year, but all that’s about to change when Arrow premieres in the fall.

Taking over Smallville’s old spot as the lead-in for Supernatural, Arrow brings the Green Arrow character that also appeared in Smallville to a brand new show, one that’s intended to be a darker exploration of superhero mythology.

Billionaire playboy Oliver Queen begins a new stage in his life after a terrifying shipwreck. Missing and presumed dead for five years, he’s finally discovered alive on a remote tropical island in the Pacific Ocean. Oliver returns home to Starling City, where he is welcomed home by his mother, Moira, his sister, Thea, and his best friend, Tommy. But his loved ones sense that Oliver was greatly changed by his experiences over the last five years.

Like a lot of superheroes, Oliver wants to hide the man he’s become, but he also wants to make amends for the sins he committed when he was younger. So he creates the secret persona of Arrow to help defeat criminals and restore the former glory of his city.

But there are people who aren’t happy about the Arrow’s vigilante ways. Detective Quentin Lance (the father of Oliver’s ex-girlfriend, Laurel Lance) would like nothing more to arrest Arrow. And it turns out that not all of his loved ones are happy about his return. It appears that Oliver’s mother, Moira, knows more about the shipwreck than we’ve been led to believe, and she’s definitely not the kind of woman you want to mess with.

Watch a trailer and sneak peek for Arrow below, which will be airing on Wednesday nights at 8:00 p.m. ET/PT on The CW.