Home
The CW
Arrow
Arrow Review: The Collision of Past and Present 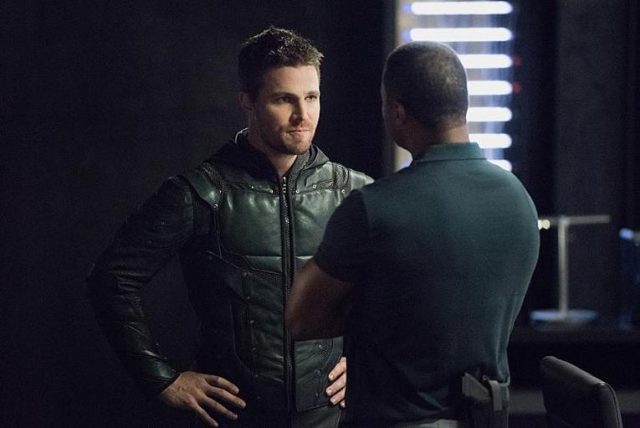 Unlike the World Series’s down to the wire, nail-biting madness, this week’s Arrow was much more subdued. In fact a lot of business was taken care of to propel the season past its standard allotment for what we can describe as “new season settling”. The new recruits are settling in, the veterans are re-integrating into the new normal, and the season’s Big Baddie is teaching the Little Baddie a lesson. There’s just one puzzlement in an otherwise clean episode. The biggest question of Â “Human Target” isn’t where Team Arrow newbie Wild Dog is, or what Little Baddie Church is planning. The biggest question is, who the heck is this guy, and what has he done with Oliver Queen?

Allow me to clarify from the top. Team Arrow works overtime to get Rene back from Church, even bringing in A.R.G.U.S with no success. I’ll hand it to Tobias Church, he sounded very “Negan-esque” as he explained to Rene that fear of pain is more of a motivator than pain himself. Somehow Rene manages to keep his head on straight, but not before he tells Church the Green Arrow’s true identity. Oliver seems unnaturally calm in light of this. He seems unnaturally calm about a lot of things. Even when Oliver was blissfully happy at the beginning of Season 4 he wasn’t this calm. That’s not to say Oliver is complacent.

Oliver asks Diggle and Rene to take a timeout, which they take advantage of by getting to know each other. Diggle may have misgivings about the new team, but he and Rene have a lot in common; both ex-military, both tortured (literally) vigilantes. Oliver made the right call pairing them together for the day. Team Arrow figure out Church’s plan from this therapy session. Church plans on bringing together the heads of the crime families he controls to one location. The why doesn’t really matter. What does matter is how Oliver and Diggle plan to stop him.

To his credit, Oliver is really trying to step up as mayor to make up for his lack of attention during his first few months in office. The previous strain he felt balancing two important jobs is gone. He puts his focus on a rezoning ordinance for low-income housing, shutting down a squirmy politician who tried to hide behind so-called noble motives. Oliver then takes the “catch flies with honey” approach with Susan Williams, the pesty reporter who’s been causing him trouble. Oliver asks for one month to earn her trust without such vocal attacks on his competence. Susan replies favorable to Oliver’s candor, which says something about his old playboy charm never really dying. Unless the boy bearing the charm ends up loaded with bullets on the steps of City Hall.

Nobody panic, no actual bleeding was involved. Diggle called in a favor from a professional man of disguise named Christopher Chance, aka The Human Target. He specializes in fancy masks, mannerisms, and taking the literal hit. The public news of Oliver’s “death” gives Team Arrow just enough time to go after Church while his guard is down. Obviously Church doesn’t count on Oliver being alive to stop him, but he also didn’t count on Chance in disguise, or a veteran (with a new helmet, Thank God!) rejoining the team. This makes the night’s work easy, but not before Church tells Oliver he’s about to have bigger worries than just him. Prometheus takes no prisoners. Wish I could say it was nice knowing you Church, but at least we can say you weren’t the most disliked villain in Arrow history.

Felicity is just a little panicky when her new beau Detective Malone joins Oliver’s Anti-Crime Unit. Of all people, Diggle’s friend Chance is the one to tell Oliver that Felicity is seeing someone. Chance is actually pretty good on the advice about living beyond the mask you wear. This prompts the dreaded “talk”. Whether or not you’re an Olicity fan, this moment was painful to watch. Again, this interaction between Oliver and Felicity is way too agreeable. Any die-hard Olicity fan will tell you the story isn’t over, mostly because Felicity’s reasoning for not telling Oliver about Malone was that she wanted to see “if it was real”. Secrets aren’t real. Let’s just leave it at that.

This week’s Russian flashbacks aren’t as action-packed, but extremely important to the present day storyline. Though Oliver officially becomes Bratva, there are those who don’t consider him trustworthy. One member arranges for Oliver to be attacked, and he only survives because of Anatoly’s quick thinking. More specifically, Oliver is saved by Chance, which explains their familiarity in the present since they actually met five years prior. Unfortunately Chance’s brief time in town brings up his time in Russia, including Oliver’s public appearances there, to none other than Susan Williams.

Was Oliver’s optimism this week too strong of a preparation for Prometheus?

Arrow moves swiftly to set up Prometheus’s entrance just when Oliver takes a turn for the optimistic.