Home
The CW
Arrow
Arrow Season 5 Episode 10 Review: “Who Are You?” 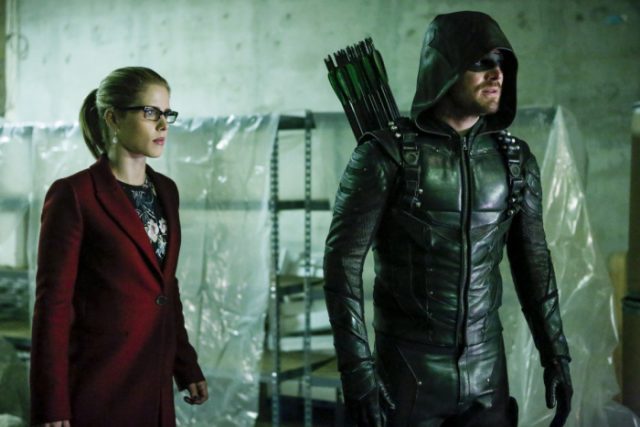 When the mid-season finale ofÂ ArrowÂ aired back in December, I praised the episode, calling it one of the season’s best, but I also mentioned my reservations about Laurel’s return to the show. My concern here had nothing to do with Katie Cassidy as an actress or Laurel as a character but more about how Arrow, in the past, has cheapened the significance of death, and I did not want them to do this with Laurel, especially given how much of Season 5’s first half focused on Oliver and the team preserving her legacy. I should have had more faith in the Arrow writers, as tonight’s terrific episode not only confirms that Laurel is actually Black Siren, who first debuted on The FlashÂ last season (although if you watched any of The CW’s promos forÂ Arrow, this reveal had already been spoiled for you), but it also uses her reappearance to explore deeper issues that have been troubling Oliver, Felicity, and the rest of the team for much of this season.

Three characters are at the center of “Who Are You?”: Oliver, Felicity, and Black Siren. While we’ve been led to believe up until this point that Black Siren is simply a villain, thanks to the chaos she caused in Central City last year, “Who Are You?” challenges those preconceived notions; Earth-2 Laurel tells Oliver about the hardships of her life, explaining that Earth-2 Oliver has been dead for 10 years, leaving her with no loved ones, which is why she moved to Central City in the first place and, by chance, acquired her abilities. Even without learning these “facts” (it’s unclear how true all of this information is by episode’s end), Oliver would more than likely still try to save Black Siren. While she isn’t “his Laurel,” she still is Laurel Lance on some level, and with the tragic backstory that she provides, reminiscent of many of the struggles that Earth-1 Laurel went through, Black Siren serves as a reminder of how Oliver couldn’t save one of the most important people in his life from Damien Darhk’s destruction. As Felicity smartly points out (because, as Oliver says himself, she knows him better than anyone), Oliver is always looking for redemption, and since he blames himself for Laurel’s death, he believes that bringing out the light in Black Siren could be his way of making up for how he failed his own Laurel.

Oliver’s belief that he can change Black Siren causes the central conflict of the episode, as his optimism and hope clash with Felicity’s more pragmatic strategies. It’s not that she doesn’t want to believe that Black Siren can change; she’s just seen Oliver place his faith in many people over the years, and it hasn’t always worked out. Just look at what happened recently with Evelyn; her betrayal not only led to Curtis ending up in the hospital but also to Billy’s death, which Felicity is still grieving.

When it comes to all things Laurel, Felicity knows that Oliver can’t be objective, especially since he blames himself, so she does what she thinks is right, even if it goes against Oliver’s orders, and it leads to some of the most well-written and well-acted Oliver/Felicity scenes we’ve gotten this season. The best part about Oliver and Felicity’s conversations in “Who Are You?” is that neither of them is wrong, and since the two of them know each other so well, they can see one another’s point-of-view and do their best to understand it.

Plus, both Oliver and Felicity’s approaches to this situation make complete sense on a character level. After falling victim to Prometheus’s trap, Oliver is in one of his darkest places yet and is looking for any type of hope to bring him back to the light, while Felicity, after Billy’s death, wants to ensure the safety of her loved ones and fears that emotional blinders (like the ones Oliver has for Laurel) could lead them into another no-win situation. These are the types of conflicts thatÂ ArrowÂ needs to be giving Oliver and Felicity, not manufactured romantic drama but difficult ethical situations with real stakes. The reason so many fans love the Oliver/Felicity dynamic on this show is because they bring out the best in each other, and “Who Are You?” serves as a wonderful reminder of that, as the conversations that they have aren’t petty, childish fights but smart, emotional discussions that challenge both of them to be better.Â ThisÂ is how you write great relationships on television, and I hope we see more scenes like the ones we got tonight in future Season 5 episodes.

While Oliver and Felicity are certainly at the center of “Who Are You?”, they’re not the only characters that get strong moments throughout the hour. This episode also does a marvelous job with Curtis’s character, as Wild Dog helps him realize that he brings value to Team Arrow, even if it’s not with his fighting skills out in the field. Curtis’s incredible intelligence and creativity are his greatest assets, and he’s able to show off those abilities by inventing new technology that he uses to help take down Black Siren and save Oliver and Felicity.

What I love so much about this development is that it feels real and earned. Curtis was never going to be one of the best fighters on Oliver’s team; his real strength has always been his brain, and after a half-season of him trying to prove otherwise, it’s satisfying to see him realize that what he brings to Team Arrow is special. What makes it all even better is that Rene is the one who helps him acknowledge this fact, asÂ ArrowÂ has done a superb job at fleshing out Rene’s character over the past few episodes, making him feel more like a full, living-breathing person rather than the rebellious caricature he was in early Season 5 installments.

It’s quiteÂ telling that the best moments from “Who Are You?” aren’t action sequences (although I did love Oliver’s quick battle against Prometheus) but conversations between characters.Â ArrowÂ is always at its best when it allows the members of the team to actually talk with each other instead of having them just throw punches at the villain of the week. Sure, these characters are superheroes, and we love that about them. But we love them even more because they’re human, because they’re flawed people just like us, and whenÂ ArrowÂ allows Oliver, Felicity, and the rest of the team to be more open and vulnerable, it’s the best superhero show on television.

What did everyone else think about this week’s Arrow? Comment below and let me know.Â

Oliver, Felicity, and the rest of team deal with Laurel’s return in the excellent mid-season premiere of Arrow.