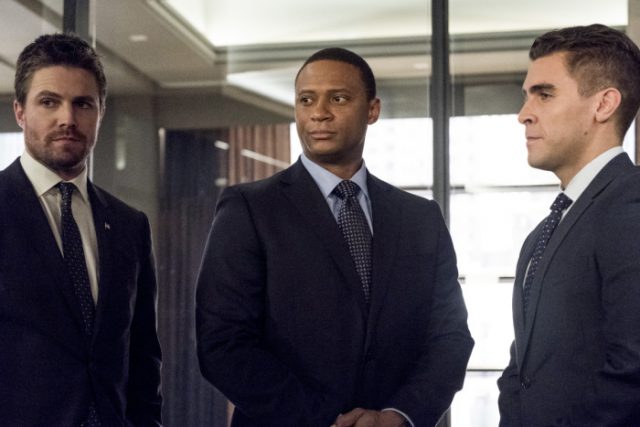 If you follow Stephen Amell at all on social media, you know that for a little while now he’s been teasing anÂ ArrowÂ Season 5 episode in which he barely wears the Green Arrow suit at all, and tonight’s hour, “Bratva,” is indeed that episode, as Oliver, Diggle, and the rest of the team spend most of their time away from Star City as they try to track down General Walker and his team in Russia. The mission for Team Arrow in “Bratva” is pretty simple: travel to Russia, find Walker, and stop him and his team from selling a nuclear bomb. However, things get complicated rather quickly when Diggle allows his hatred of Walker to control him (leading to his torturing of one of Walker’s henchmen) and Felicity embraces her darker side, using the information she’s acquired on Pandora to blackmail a man into helping them locate the evil general.

So what’s so wrong about what Diggle and Felicity are doing? We’ve seen Oliver and countless others bend and break the rules before on this show; why should the two of them be looked at any differently? It’s because of how important they are to Oliver, not only as friends and loved ones but as inspirations. I mentioned in my review of last week’s episode that Oliver’s second chance at life didn’t come from him donning a hood and protecting Star City; no, it came from his relationships from with Diggle and Felicity, two people who didn’t know him before his time on the island but saw something strong and hopeful and heroic in him when he returned, two individuals that not only work with Oliver as crime fighters but have encouraged him to be a better man, to fully live up to his potential.

If they falter, then who does Oliver turn to for advice and wisdom? If Diggle and Felicity fall into the darkness, then what hope does Oliver have to be a beacon of light? Is Prometheus actually right about Oliver and his crusade in Star City? Does he only cause pain and death to those around him? Oliver’s worries about John and Felicity are only intensified by the fact that all of this is taking place in Russia, a place that serves as a powerful reminder of the killer he was in the past. It’s here, in this location where Oliver is surrounded by his fellow Bratva members and the crime that they are all a part of, that he needs Diggle and Felicity’s light more than ever, so that he can focus on the person he has become in the past five years instead of remembering the man that he used to be.

Oddly enough, though, it’s not John or Felicity’s words that have the greatest impact on Oliver in this week’sÂ Arrow. Instead, it’s his conversation with Dinah that shakes him from his self-doubt, as she tells him what he (and we) have known for years: that Oliver is not defined by how he lived in the past but by who he continues to be in the present. As Dinah explains, Prometheus has Oliver paying so much attention to what’s wrong with him that he’s not able to recognize all the good he does; Oliver has become so consumed with his past failings that he’s letting them drag him down like an anchor. Fortunately, it seems that Dinah’s words in “Bratva” (along with Diggle’s reaffirmation that it’s not just he and Felicity that make Oliver better but that the three of them are at their very best when they’re together as a united team) have helped Oliver break free of his self-hating ways (for the moment at least), because in order to fight against Prometheus and win, he’s going to need to believe not only in himself but in the team around him.

Sadly, that team gets a little smaller at the end of this week’sÂ Arrow, as Rory temporarily leaves Star City when his rags lose their magical power after he uses them to absorb the blast from Walker’s nuke. Fittingly, Rory’s final scene is with Felicity, and “Bratva” does a pretty remarkable job of ending their journey together, as the two of them work together to stop another Havenrock incident from happening. Some could argue thatÂ ArrowÂ still hasn’t dedicated enough time to Felicity’s grief over what she was forced to do last season, but between the opening hours of Season 5, which saw Felicity confronting the Havenrock issue head-on by talking to Rory, and her actions in tonight’s episode, I feel quite satisfied with how theÂ ArrowÂ writers have handled this storyline, especially after they essentially ignored it at the end of Season 4.

Not to mention, Felicity appears to be getting her meatiest story of the season yet with her plans to continue down her dark path of hacking, and with Rory gone from the team, there’s no one there who fully knows what she’s capable of or who can serve as her conscience as she keeps using Pandora. This arc certainly works as a more compelling and potentially more fulfilling way of exploring Felicity’s grief over Billy, as her desire to dive deeper and deeper into the world of hacking provides her with the power and control that she didn’t possess to prevent Billy’s death. However, I can’t see her actions continuing on for too much longer without Oliver discovering what she’s really up to, and when Oliver does find out, I believe he’ll help bring the light back to this new, dark version of Felicity, inspiring and encouraging her just like she’s done for him so many times in the past. It’s just like Diggle says: they bring out the best in each other.

Oliver, Diggle, and the rest of the team head to Russia to take down General Walker in a unique episode of Arrow.