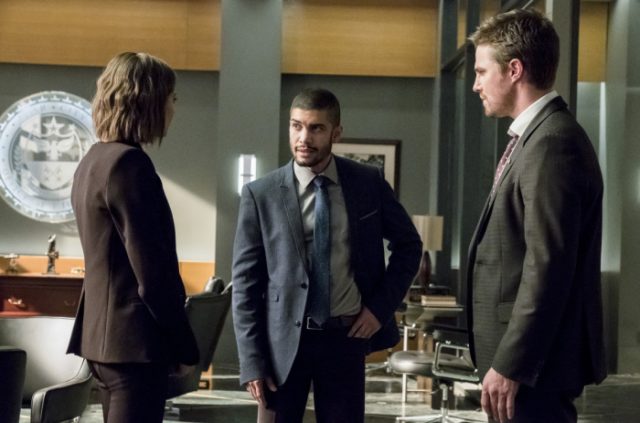 I really admire this week’s Arrow. “Spectre of the Gun” is unlike any other episode we’ve seen from the show this season, as it tackles the very topical and highly debated issue of gun control, and it does so in a respectful way, allowing both sides of the debate to share their views and arguments for why the buying and selling of firearms should be more or less restricted. However, whileÂ ArrowÂ executive producer Marc Guggenheim does an admirable and respectful job of showcasing the current political climate and the conflicting viewpoints on gun control, he does an incredibly poor job of making an entertaining episode of television.

“Spectre of the Gun” is certainly well-intentioned, but it lacks any form of subtlety while dealing with this important issue, leading to a heavy-handed hour that pauses the action and excitement of Team Arrow’s fight against Prometheus in favor of big speeches and constant debates. For most of its running time, “Spectre of the Gun” feels like the worst version of aÂ GleeÂ “very special episode”; it forces the show’s characters to become mouthpieces for different political parties, using nearly every bit of screen time they have to preach about what America should be like or to throw out statistics to back up the arguments that they are making. The two worst offenders of this are Curtis and Quentin, who serve no other purpose in this episode than to clash against Rene’s pro-gun views and to instruct Oliver on how he should take on this issue as mayor after James Edland, whose family was killed in a mass shooting at a mall, attacks City Hall and plans to open fire again at Star City General.

After Edland’s initial attack leaves five people dead and two dozen injured, Oliver must consider his stance on gun control and if his administration will attempt to pass any type of legislation in response to Edland’s actions. This storyline is an interesting one in theory, as it provides us with our first real look at Oliver as a politician, and it’s satisfying to watch him transformÂ from overwhelmed and unprepared newbie into the strong, tactful mayor that he is at the end of the hour. However, no matter how hard Stephen Amell tries, there’s no salvaging most of the dialogue he’s given, particular Oliver’s “big moments” during the episode, when he talks Edland down at the hospital and when he brings the city together at the vigil for the victims of the City Hall shooting. Again, the intention here is admirable, and it’s in-line with Oliver’s new approach to life, as he tries to bring out more light and unity not only in Team Arrow but in Star City itself. But the execution is so lackluster, every situation feels forced and every piece of dialogue is so cliche, that it lacks any of the emotional punch that we’ve come to expect fromÂ Arrow‘s best episodes, especially the ones we’ve seen throughout Season 5.

There are two storylines in “Spectre of the Gun” that do work extremely well on an emotional level, though: Rene’s tragic backstory and Diggle and Dinah’s bonding. When it comes to the main themes of this episode, Rene’s storyline ties in more directly, as we get flashbacks to him with his family and discover that his wife, Laura, was a victim of gun violence. Laura was shot and killed by her drug dealer, who came to Rene’s home while he had taken his and Laura’s daughter, Zoe, to a hockey game. Although Rene was able to take down the drug dealer with his own weapon before he could shoot Laura or Zoe, the dealer’s finger was still on the trigger of his gun when he fell to ground after Rene shot him, and it was that bullet, from the drug dealer’s last trigger-pull, that struck and killed Laura.

Following Laura’s death, Rene also lost custody of Zoe, as his home was deemed an “unsafe environment” by Child Services, and it’s that scene, more than any other from his flashbacks in this episode, that hurts the most. “Spectre of the Gun” does a terrific job at showing us just how great of a father Rene was to Zoe, and seeing him lose her, due to grief and not neglect, is a real gut punch. Furthermore, this new information only adds depth to Rene’s character and makes many of his past actions, such as bringing Diggle, Lyla, and John Jr. together for Christmas, all the more powerful in retrospect. Rene is someone who values family above all else, which is why he’s so dedicated to Team Arrow and all of its members, and this tragic bit of his past helps explain why: he’s lost those he loved most before, and he won’t ever do it again. Here’s hoping that Curtis and his lawyer friend can help Rene reunite with Zoe by season’s end.

Meanwhile, Diggle and Dinah’s storyline couldn’t be more disconnected from the main events of “Spectre of the Gun,” but it works well enough on its own due to the chemistry between the characters and the performances of David Ramsey and JulianaÂ Harkavy. After spending the past few years seeking nothing but revenge, Dinah struggles to adjust to her new life in Star City, and Diggle does his best to help her, which starts with finding her a place to live. Dinah, though, is afraid to settle down again after everything she’s been through; after gaining powers and tracking down her partner’s murderers, she’s no longer the woman she used to be. How can she try to live a normal life when she doesn’t feel normal in the least?

Fortunately for Dinah, John Diggle is the master of giving advice, which is why he tells her that she doesn’t need to be anyone else but herself. As long as Dinah gives herself the opportunity to find happiness again, to find satisfaction in life outside of the vendetta that she had, she’ll eventually discoverÂ it, just like Diggle was able to when he came home from serving in the military and just like he was able to again after being put in prison multiple times this season. “It starts with the little things,” Diggle tells Dinah, and while it’s just a small bit of advice that he provides in a brief conversation between the two of them, it’s enough to get Dinah to start living again. She signs the lease to the apartment that she wants and joins the SCPD, returning to her police roots, and I’m excited to see if this episode is a sign of things to come between her and Diggle because I’m already a big fan of their newfound friendship.

Despite how admirable the intentions of “Spectre of the Gun” are, there’s no denying that it’s easily the weakestÂ ArrowÂ Season 5 episode yet. Everything connectedÂ to the main storyline falls flat, especially the dialogue, and the strong side stories involving Rene and his family and Diggle and Dinah aren’t enough to salvage the heavy-handed nature of the episode as a whole. Hopefully, next week’s ArrowÂ returns the show’s focus to the characters and their journeys, because that’s when this show is at its best, not when it’s trying to tackle major issues but when it tells entertaining and emotional personal stories about Oliver Queen and the rest of Team Arrow.

What did everyone else think about this week’s episode ofÂ Arrow? Did it work better for you than it did for me? Comment below and let me know.Â

Oliver takes a stance on gun control, and Wild Dog’s tragic past is revealed in a well-intentioned but heavy-handed episode of Arrow.