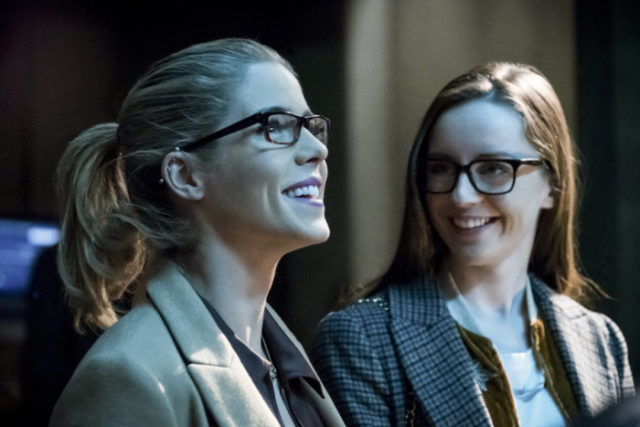 As I’ve stated before in various other reviews throughout this year,Â ArrowÂ Season 5 has done its best to give fans a more vulnerable, optimistic, and complex Oliver Queen. While the past two seasons of the show have toyed with this idea, most notably Season 3, which forced Oliver to choose between his real identity and his Arrow persona (hell, the title of the finale that year was “My Name Is Oliver Queen), neither of them explored the pain and loss that Oliver struggles with better than this season, and a large part of that is due to Season 5’s villain, Prometheus, who was revealed in Arrow‘s last episode to be Star City D.A. and friend of Oliver’s, Adrian Chase.

Throughout this season, Chase has ensured that Oliver not only remembers the sins he’s committed in the past but the heartache and self-hatred that these actions instilled in him, and he’s also done his best to force Oliver to acknowledge every single loved one he’s lost due to his crime-fighting crusade and his role in those people’s deaths. By making Oliver confront his past, Chase hopes that he can reshape his nemesis into the man that he truly believes Oliver is. As he repeats so many times throughout “Checkmate,” he doesn’t want to kill Oliverâ€”he wants to destroy him.

And while Oliver’s strength and willingness to do good remain intact by the end of “Checkmate,” it’s easy to see the cracks beginning to form in his superhero armor. Look no further than Oliver’s conversation with Diggle near the end of the episode, in which he questions whether he should have trusted anyone when he began this journey five years ago, calling all of his friends and teammates “targets” that Chase and other villains will try to harm in an effort to hurt Oliver. Diggle argues against that idea, insisting that the members of Team Arrow are Oliver’s strengths and that he needs to have some people in his life that he loves and trusts; that’s just being human. But Oliver counters Diggle’s argument by saying that his enemies turn his strengths into weaknesses, and he even goes as far as to suggest that he might not have the luxury of being human. Perhaps, despite what Talia al Ghul tried to teach him years ago about separating the monster from the man, Oliver is now recognizing that if he truly wants to save his city, he can only be a vigilante and nothing more.

That’s at least what Chase wants Oliver to believe, and you can bet that he’s going to do everything he can to revert Oliver back to his violent, lone-wolf ways now that he’s captured him, thanks to Talia al Ghul’s help. Chase knows that Oliver has spent the past five years not only trying to make Star City a better place but also trying to make himself into a better man, and he’s been able to do that with the help of people like Felicity and Diggle. However, by cutting Oliver off from those he trusts and loves most and by physically and emotionally torturing him, Chase hopes to fully achieve his goal of destroying Oliver Queen. He doesn’t want to just take Oliver’s life; he wants to take away everything he stands for, the hope, goodness, and justice that he has brought to Star City over the years. For Chase, killing the man won’t be enough; he wants to see the man become the monster and then, and only then, will he shoot an arrow through Oliver’s heart.

Similar to Season 2’s Slade Wilson arc, Adrian’s vendetta against Oliver works because his ambitions are more than sheer bloodlust. The worst villains onÂ ArrowÂ (or any of The CW’s superhero shows really) have only wanted to inflect physical damage against our protagonists, but the best, most memorable ones take it one step further and try to strip away what makes these superheroes actual heroes. Slade tried to do it by not only murdering Oliver’s mother in front of him but also by unleashing a super-powered army to destroy Star City; here, in Season 5, Chase has tricked Oliver into shooting and killing Billy and has turned the entire city against the Green Arrow, to the point that there’s no realistic way that the police wouldn’t try to shoot him on site. Furthermore, Chase’s main goal, to destroy the person that Oliver has become, ties in perfectly with Season 5’s overarching theme, again similar to Slade Wilson’s mission in Season 2, which challenged Oliver to break his firmly established no-kill rule and thus regress back from the hero he was becoming into the violent vigilante he used to be.

Sure, I can nitpick about how Susan is used as the main motivator here in “Checkmate,” when she hardly feels like a fully developed character, and that truly is the episode’s weakest element. Susan doesn’t possess the same emotional weight that someone like a Moira, Thea, or Laurel does. However, the story being told here is bigger, richer, and more important than any complaints I have about Susan as a character. Her presence is definitely more of a distraction than it should be in “Checkmate,” but it doesn’t rob the episode of so many of its great moments, from the previously mentioned conversation between Oliver and Diggle to Felicity’s continued entanglement with Helix to the pure delight that is snarky, villainous Adrian Chase.

And speaking of Felicity, while Oliver struggles throughout “Checkmate” to stay in the light, Felicity spends most of the episode continuing to explore her darker side as she works with Helix. Although we’ve seen Felicity use Helix resources before to help Team Arrow with their missions, this is the first time that we witness her actively conducting projects specifically for them, and even though Felicity is fulfilling these hacking requests as a means to help out the team, there’s no denying that she enjoys the power and strength that comes with her involvement with Helix.

Now that Oliver has been taken captive by Adrian, it’s pretty much guaranteed that Felicity will do any amount of illegal things for Helix to help get him back home safely. But what will become of Felicity after she grows more connected to this shady organization, and will she still be able to inspire the light inside of Oliver and other members on the team when she appears to only be letting in the darkness? Could what Felicity has to do in order to save Oliver cost her everything that makes her who she is, that makes her the woman that Oliver loves? When Adrian Chase is done with Oliver, will he or Felicity even be able to recognize each other, or will the darkness win out and the monster that Oliver has buried down deep inside himself return?

Oliver and the team try to save Susan, and Felicity becomes more entangled with Helix in another strong episode of Arrow.