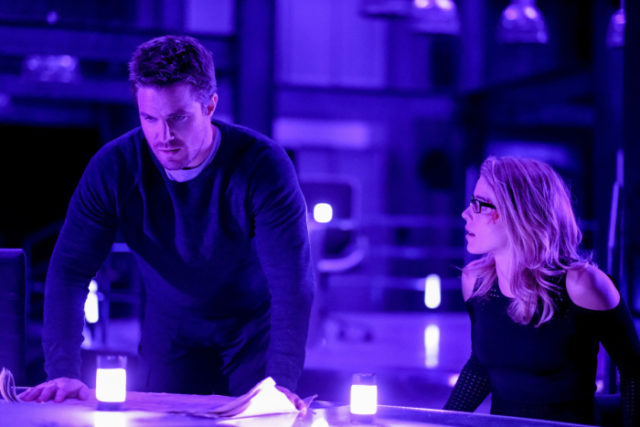 One of the most universal (and warranted) complaints lodged againstÂ ArrowÂ Season 4 was how the series handled Oliver and Felicity’s relationship in the back half of the season. Whether you’re a fan of the two of them as a couple or not, pretty much everyÂ ArrowÂ viewer was left unsatisfied with the pair’s break-up, which, at the time, appeared to be nothing more than a bit of contrived drama used to cause conflict within the team. At that point in Season 4, the audience couldn’t understand why Oliver failed to be honest with Felicity about his son, and the fact that there was no follow-up conversation after the two of them split, no discussion addressing their actual problems, left a lot of people, including myself, scratching their heads.

“Underneath” doesn’t completely make up for last season’s failings, but it certainly does a lot to rectify the relationship problems that have plagued Oliver and Felicity for the past season and a half. If there was one thing missing from the second half of Season 4 and the first half of Season 5, it was the dynamic between the two of them, the friendship and comradery that they always had with each other even before they become romantically involved.Â ArrowÂ first began repairing Oliver and Felicity’s relationship in this season’s “Who Are You?” and has since been laying the groundwork for them to finally confront their issues with one another, a process that started in last week’s episode but doesn’t really come to fruition until tonight’s installment.

After the events of “Dangerous Liaisons,” which concluded with an EMP bomb going off inside of the Arrowcave, Oliver and Felicity are trapped inside the bunker for the majority of “Underneath,” and the two of them workÂ together to try to find a way out before they run out of oxygen or die from exposure to methane gas. It’s a race against the clock that forces Oliver and Felicity to use their brains to come up with multiple plans of escape, while the rest of Team Arrow, along with Lyla, tries to find a way to break into the bunker to save them. All of the action, from Oliver’s initial fall (That’s why you always listen to Felicity, dude!) to the incredible rescue scene near the end, is tense, exciting, and compelling not just because of how high the stakes are or because of how dangerous the situation is. No, the reason why “Underneath” is so intense for so much of its running time is because of all this is happening to two characters that we care deeply about, two characters that continue to makeÂ ArrowÂ one of the best superhero dramas on television.

And really, it’s always the characters and their interactions that make for the bestÂ ArrowÂ episodes. The series can pull off amazing stunts and fight choreography, deliver cool comic-book nods, and provide us with entertainingÂ villains, but none of it matters without heroes that we want to root for, characters that we want to invest our time in and spend an hour a week with every Wednesday night. By putting its primary focus on Oliver and Felicity, two of the show’s richest, most well-developed characters,Â ArrowÂ ensures that, just like last week, it gives fans an episode that they connect with on a deeper emotional level, an hour of television that is easily one of the best episodes thatÂ ArrowÂ has produced this season.

In “Underneath,” Oliver and Felicity are forced to face their issues. The conversation that Felicity started at the end of last week’s episode about Oliver not trusting her is only the jumping off point for a powerful exploration of who both these characters are as people and why they are so much better when they are together. And unlike in the past, neither of them can walk away from this discussion; they are literally trapped together with no way out, and with the possibility of the two of them not making it out of the bunker alive, Oliver can finally tell Felicity the truth about why he lied to her, a truth that he only just fully learned himself this year.

Oliver tells Felicity that the foundation of Team Arrow, of everything he, she, and Dig built over the year, was all based on a lie, that he became a vigilante and beganÂ his crusade in Star City not to honor his father but to feed his need to kill. He admits to her that he killed criminals because he enjoyed killing them, not because he was protecting the city, and that it’s because of that original sin, because of the person he is, not the person she is, that he was never able to fully open up to her. “It’s not about trusting you,” Oliver says. “I will always trust you. I don’t trust myself.”

Oliver telling Felicity his deepest, darkest secret is a huge turning point for the two of them, not only because Oliver finally allows the woman he loves to see him at his most vulnerable but because Felicity is the only person that can truly make Oliver believe that he’s better than the monster he hates. Despite Oliver’s protests about Felicity not knowing the real man that he is, she remains insistent that she does truly know him; he’s the man she fell in love with, the man she agreed to marry, and she knows that, even though Chase made Oliver confront the worst version of himself, she’s seen the best version of him, a person who selflessly sacrifices himself in order to save the people (and city) that he loves. Now that Oliver has finally divulged this truth to Felicity, he can fully remold himself into someone else, into someone even better than the person he’s been for the past couple of years. He’s made strides with Diggle, Felicity, and the rest of the team by his side, but with his demons finally out in the open now to the most important person in his life, Oliver can finally begin again. As Felicity tells him during the final moments of the episode, “You said you didn’t know what kind of person you are. I think you should figure that out.”

So with Oliver starting again, can he and Felicity also start again together as a united couple? After “Underneath,” the answer to that is a resounding yes, and Oliver confessing his secret isn’t the only reason why. An even more important reason comes from what Felicity tells him as he lies in the ARGUS hospital bed, when she reflects on her time with Helix and the recent decisions she’s made, telling Oliver that she understands him more now because she’s gotten the tiniest taste of the darkness he’s endured. That acknowledgement and understanding from Felicity is crucial because it signals a major change in her and Oliver’s relationship; she’s no longer this pure embodiment of goodness and light, this angel that guides his way–her time with Helix has given her the agency and experience she needed to mourn Billy, to get her hands a little dirty, and to see Oliver more clearly, recognizing the pain, despair, and anguish that has been buried deep inside him for nearly a decade, ever since The Queen’s Gambit crashed and he ended up on Lian Yu. Felicity sees a more complex, fully formed Oliver Queen, the good and the bad, the light and the dark, and it ensures that whatever type of relationship the two of them have moving forward will be deeper and truer than what came before it.

And that’s because, by the end of “Underneath,” Oliver and Felicity are truly equals. They might not have experienced all the same things and they might not always see things the same way (look no further than the different ideas that both of them come up with to escape from the bunker in tonight’s episode). But by being completely honest with each other about their pain, the pain they’ve felt from others and the pain they’ve inflicted upon each other, the two of them provide one another with a sense of hope. It’s hope that they’ll need to take down Adrian Chase, hope that they’ll have to continue inspiring and encouraging each other, and hope that they’ll trust to find a way to be together again some day soon.

What did everyone else think about tonight’sÂ Arrow? Did you enjoy the episode as much as I did? Comment below and let me know.

Oliver and Felicity are finally honest with each other about their feelings as they fight to survive in a tremendous episode of Arrow.