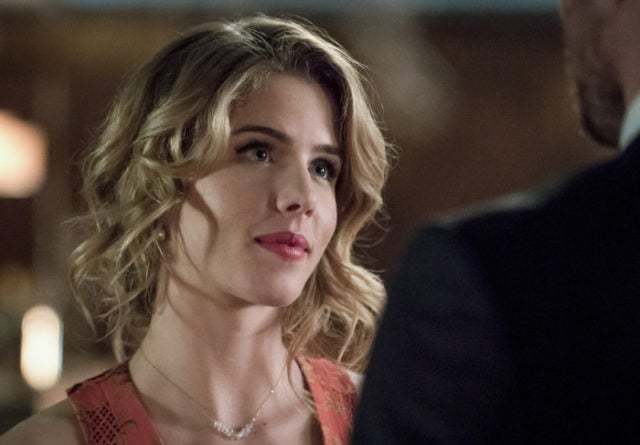 Can we talk about how much fun that was? Tonight’s episode ofÂ ArrowÂ is not as character-driven as the past few weeks’ installments have been, and it honestly can’t afford to be given how much it has to set up for next week’s epic Season 5 finale. Due to those restrictions, there’s a table-setting quality to “Missing” that it just can’t shake, no matter how intense each new situation becomes; it’s more of a first chapter rather than a fully completed story like “Underneath” or “Honor Thy Fathers.”

However, that doesn’t stop it from being an exceptionally entertaining hour of television. “Missing” is a pulpy, action-packed, and adventurous episode ofÂ ArrowÂ that provides viewers with many goosebump-inducing moments. Aside from some of Oliver’s conversations with Thea, Felicity, Diggle, and (surprisingly) Malcolm, there’s not a ton of meat to the character interactions in tonight’s episode (and I do hope that the show does more with Quentin’s connection with Black Siren in next week’s finale), but what the series lacks in depth this week, it makes up for in jaw-dropping excitement.

And what’s so exciting about this week’sÂ Arrow? Let’s start with John Diggle and Felicity Smoak driving their car right atÂ League of Assassins members. Or we could talk about Chase bringing all of Oliver’s loved ones to Lian Yu. But we also can’t forget the return of the amazing Nyssa al Ghul. Oh yeah, and there’s one other return I wanted to mention: Slade Freaking Wilson!

Of course, due to the spoiler-filled age we live in now, Slade’s return has been widely reported by every major entertainment outlet out there, so Oliver turning to his archenemy for help in the final moments of “Missing” isn’t exactly surprising. But just because I was expecting it doesn’t mean that I wasn’t cheering when it happened, not only because it will be so much fun to have Slade back for next week’s finale but also because of what Slade means to both Oliver and toÂ ArrowÂ Season 5. Having this characterÂ back in this year’s finale, following a season that has been so focused on Oliver accepting and moving on from his past, can only be a good thing that will ensure that Oliver’s arc, unlike the ones he had in Season 3 and Season 4, feels complete.

But we can talk more about Slade and his return when we actually see him in action next week. For now, let’s turn our attention back over to “Missing,” which does a terrific job of illustrating just how close Oliver is to finally embracing the future and leaving his monstrous history behind.

ArrowÂ showcases this transition for Oliver through small interactions, such as his and Felicity’s conversation at his birthday party (How much fun are the parties scenes in tonight’s episode, by the way?), in which he admits to her that he’s unsure of what to do next now that Chase has been taken down. While Oliver now recognizes that he can have a future that is unburdened by his past, he can’t quite envision it yet. That’s why he and Felicity agreeing to take things one step at a time is such an important moment; it signifies so much more than just the future of their romantic relationship, which looks pretty bright now that they’ve worked through all of their major issues. Those words also represent Oliver’s journey this season and what lies ahead for him after Season 5. We’ve seen Oliver make great strides this year, by conquering his demons and admitting his past sins to not only himself but those he loves; however, he (and we as an audience) can’t expect him to completely change over night. It will be a step-by-step process, one that will be made possible thanks to the love, compassion, and understanding that Oliver has in his connections with Felicity, Diggle, and the rest of the team.

Shockingly, it’s Malcolm Merlyn, of all people, who reminds Oliver that his loved ones are what are helping him be more man than monster. As Malcolm puts it, human connections are what keep us human. If Oliver isn’t careful, he’ll lose the link he has with those who matter most and be pulled down by the anchor of his past, which is almost what happens to Oliver during this episode’s flashbacks before a vision of Laurel appears to combat all of the pain that is consuming him and to remind him to keep fighting for those he loves.

During those flashback sequences, Kovar tells Oliver that the drug he injected him with will make him confront his inhumanity, and at that point in Oliver’s journey, Kovar was right. Before he returned to Star City, before he met Diggle and Felicity, before he donned the hood as the Green Arrow, Oliver Queen was more inhuman than human, more monster than man. It’s why Oliver, in seasons past, has never been able to reveal his full plan or true intentions to his teammates, even those he values most; as he tells Felicity in “Underneath,” he didn’t trust himself. Fortunately, even with those emotional limitations holding him back, Oliver has been able to defeat villains like Slade Wilson, Ra’s al Ghul, and Damian Darhk.

But the Oliver Queen we know now is different. He confronts his past, accepts his sins, and allows himself to be vulnerable. He allows himself to be fully, truly human, instead of hiding his humanity under his hood, under the guise of being “something else.” And that’s because this Oliver Queen knows that his strength doesn’t come from the bow he carries or the arrows he fires. His ability to do good, his ability to be a hero, comes from the people he surrounds himself with, the people he calls his team, the people he calls his family, and his faith, trust, and love of them are what will help him finally defeat Chase in the Season 5 finale. But hey, having Slade Wilson, Nyssa al Ghul, and Malcolm Merlyn by his side doesn’t hurt either, does it?