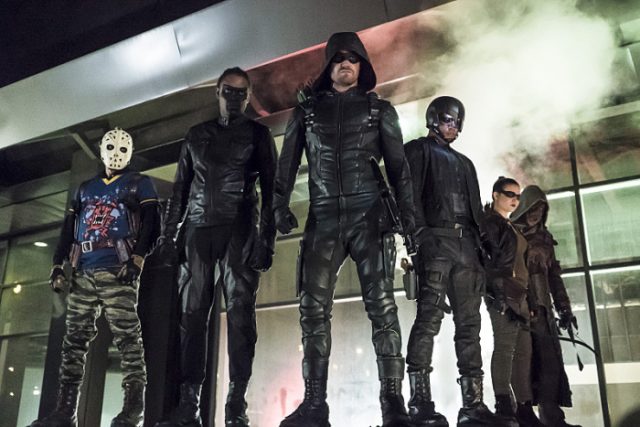 Throughout the first five episodes of Season 5,Â ArrowÂ has given viewers little tastes and teases of this year’s big bad, Prometheus. However, in tonight’s installment, “So It Begins,” we learn a lot about Star City’s deadly new villain, as the series reveals that not only does Prometheus have a very personal vendetta against Oliver (he murders people whose names are anagrams for those on Oliver’s kill list from Season 1 and makes his throwing stars from the arrows Oliver has shot and used on criminals from over the years) but that he’s also more than likely a current or past member of the SCPD. Of course, the shot of Quentin at the end of the episode, with the wound on his arm and the throwing star on his table, is a misdirection; there’s no way that Arrow is giving up Prometheus’s identity this early in the season, and the idea that Quentin could orchestrate this all during his drunk blackouts is ludicrous. But still that new bit of knowledge that Oliver and Felicity gain opens up many possibilities for who Prometheus could be, most obviously Felicity’s new boyfriend, Billy Malone, who would have had access to all of the evidence needed to forge those throwing stars (or maybe Billy’s just helping Prometheus?).

No matter Prometheus’s actual identity, though, he’s proving to be quote the formidable villain for Team Arrow. Anytime he appears on screen, there’s a sense of danger and fear that hasn’t been present since the Slade Wilson days of Season 2. Plus, his mission to make things between him and Oliver extra personal has allowed for the superhero series to provide callbacks to its earlier days, such as the kill list from Season 1, and moments like that, which allow us to see how far Oliver has come (and how much further he still has to go) infuse Arrow with some much needed richness and depth. After four-plus seasons and nearly 100 episodes, it’s easy for a show and its characters to begin to feel stale, as if they haven’t progressed at all over the years, but when it comes to many of the show’s major players, whether we’re talking about Oliver or Diggle or Thea, Arrow has done a terrific job throughout Season 5 at illustrating their continuing evolution.

When Oliver is at his lowest in “So It Begins,” Diggle is there to remind his best friend that he’s grown into a stronger, more humane, and more heroic man over the years. Even though Oliver has begun to kill again, Diggle, who has been there with him since the beginning, explains how different his actions are now compared to when they first met. “You were killing as a first resort, not a last,” Dig says, as he tries to prove to Oliver that his current code isn’t the same one that he hadÂ before. Unfortunately, with all of the dangerous criminals that exist in Star City, killing for Team Arrow does have to be an option sometimes, but it’s never the preferred one. Unlike during his time as The Hood, Oliver isn’t just shooting arrows into the hearts of his villainous victims without asking any questions; he only kills to save lives, not just to take them.

As Diggle tells Oliver, the vigilante version of him from four years ago would have never even questioned his killing code, but he’s no longer that person. He still may have trouble trusting people and he may still put the weight of the world on his shoulders, but he’s also a man that loves and cares for others more deeply than he did when he first escaped the island. In the four-plus years since he’s returned to Star City, Oliver has transformed from someone that was distant and cold into a caring and compassionate individual; he’s fully made the transition from vigilante into hero, and his concerns about taking others’ lives reflects that.

But Oliver isn’t the only Queen who has changed since Arrow first began. We’ve seen Thea evolve from troubled teen to skilled warrior to committed chief of staff, but I’m not sure if there’s ever been a more satisfying story for her than what we’ve been getting this season. Thea’s relationship with Quentin since this season’s premiere has been one of Arrow‘s strongest elements, and it continues to be a welcome component of Season 5. In tonight’s episode, we see, yet again, how Thea has gone from a drug-taking, alcohol-abusing high schooler to a fierce, independent woman who doesn’t need a suit or weapons to save people. Her efforts to help Quentin beat his alcoholism are noble and admirable, even if they’re not successful, and it shows just how vital of a character Thea has become over the years.

Not to mention, the father/daughter dynamic between Quentin and Thea supplies ample amounts of emotional material without ever being too heavy-handed. Thea fills the void Quentin now has in his life after Laurel’s death and with Sara off adventuring with theÂ WaveriderÂ team onÂ Legends of Tomorrow, and even with his demons, he serves as a more stable and inspiring father figure than she’s ever had in her life. Plus, I can’t stress how much I prefer watching Thea struggle with Quentin’s failings rather than Malcolm’s for the umpteenth time.

Although the team is bigger than it’s ever been before, Arrow has been able to rediscover its central characters in Season 5, telling both new and old stories about these individuals with very successful results so far. Prometheus may be a frightening and mysterious menace right now, but his desire to make each of his killings personal for Oliver imbue his actions with an energy and edge that has been missing from the series the past couple of seasons. It still remains to be seen whether or not Prometheus will continue to be one of Arrow‘s top villains, but as long as his agenda keeps causing the show’s characters to explore their inner demons in compelling ways, I’ll be pleased with his presence, no matter who is behind the mask.

Oliver and the team learn some surprising details about Prometheus in another fantastic Season 5 episode of Arrow.