Home
The CW
Arrow
Arrow Season 5 Episode 9 Review: “What We Leave Behind” 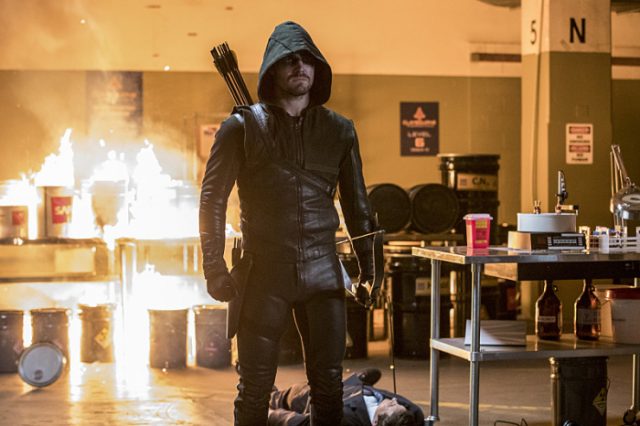 Well, that was one hell of an episode ofÂ Arrow, wasn’t it? Throughout its four-plus seasons, Arrow has always done mid-season finales incredibly well, whether you’re talking about “Three Ghosts,” “The Climb,” or even last year’s “Dark Waters,” and “What We Leave Behind” is no exception. This is a dark, intense, and emotional hour of Arrow, one that not only reflects on our favorite characters’ pasts (as this season has been doing so well throughout these first nine episodes) but also propels the story forward in many exciting, surprising, and downright shocking ways.

By episode’s end, Prometheus, who is revealed to be the son ofÂ Justin Claybourne, a corrupt pharmaceutical CEO that Oliver killed back in Season 1, makes good on his promise to not just destroy Oliver but the entire team that he has built this season. From the attack on Curtis to Billy’s death, “What We Leave Behind” is a nonstop emotional (and at times physical) assault on Oliver, Diggle, Felicity, and the rest of team, as secrets are revealed and people die, leaving each member of the group questioning how they’ll move forward after all the pain they’ve gone through.

As I mentioned above, Curtis is attacked by Prometheus, and that fight between the two men causes Curtis’s web of lies to crumble as Paul learns the truth: his husband has been working with the Green Arrow. Similar to how we’ve seen other characters in the Arrowverse react to the revelation that their significant other is a superhero or a vigilante, Paul doesn’t take the news well; in fact, he decides to leave Curtis because he doesn’t want to take away this newfound happiness he now has a vigilante but he also can’t stand by and worry that he might be killed every night he goes out. It’s an emotional blow that hurts Curtis more than any bullet or throwing star could, and the last time we see him in the mid-season finale, he’s a crying mess, a person who can’t deal with the heartbreak that he’s feeling.

The same could be said for both Felicity and Oliver, as Prometheus kidnaps Billy and then stages him to look like the villainous archer. Believing that a disguised Billy actually is Prometheus, Oliver fires three arrows into the detective’s chest, killing him, and when Oliver discovers the real identity of his victim, he’s distraught, not just because he murdered an innocent man but also because of how much Billy’s death will hurt Felicity. Both Stephen Amell and Emily Bett Rickards are tremendous during the scene in which Oliver admits that he mistakenly killed Billy (and they’re also great together in an earlier flashback scene, but more on that later), as they perfectly portray the numbness and disbelief that both characters are feeling. Neither of them could have foreseen what Prometheus was planning, and the shock and pain of that plan’s execution is almost too much for them to bear.

In the episode’s opening scene, Prometheus tells Evelyn that he doesn’t want to kill Oliver; he wants to make him wish he was dead, and by the end of “What We Leave Behind,” he’s nearly successful. We’ve never seen this new version of Team Arrow deal with such overwhelming tragedy before, and it clearly leaves most of them stunned, particularly Oliver who attempts to push everyone away again in an effort to keep them safe, buying into Prometheus’s claim that he causes the deaths of everyone that’s close to him. Thankfully, Diggle is there to set his best friend straight, telling him that they are all “exactly where we are supposed to be,” reminding Oliver that during the darkest times in life, you need to rely on the people you love and trust most in order to deal with the pain. Oliver may feel worse than death right now, but he’ll only be able to get through it with the team’s help; he started this season essentially alone, and Diggle, Felicity, and the rest of the group won’t let him revert back to those old, unhealthy ways.

And speaking of death, let’s talk about how it never seems to stick onÂ Arrow, because look who shows up in the episode’s final scene: Laurel Lance. While I was never the biggest Laurel fan, I did appreciate what she brought to the show throughout her four seasons, and I’ve always enjoyed Katie Cassidy as a performer, whether onÂ ArrowÂ or onÂ SupernaturalÂ or even when she was barely used as a guest star onÂ Gossip Girl. However, I’m not sure how I feel just yet about her return to the show. It’s a strong cliffhanger to leaves fans with untilÂ ArrowÂ returns in January, but if Laurel is actually alive again, because of Flashpoint or magic or some other crazy reason, I won’t be happy.

Obviously, Laurel Lance/Black Canary is a hugely important character in the Green Arrow comics, but having her come back to the show, after how much focus and attention has been placed upon her death and her legacy (and after having Oliver and Sara both bid her an emotional farewell in last week’s 100th episode), feels more than a little cheap. Of course, it depends on how theÂ ArrowÂ writers execute this storyline during the back half of the show’s fifth season, but as of right now, Laurel’s return feels like nothing more than pure shock value, something to “wow” viewers with so they’ll tune back in next month. I hope I’m wrong and whateverÂ ArrowÂ has planned for Katie Cassidy and Laurel is something special, but as of right now, I can’t find myself feeling too enthusiastic about it, especially when it also continues to lower the stakes and lessen the importance of death on the series.

My thoughts on the cliffhanger aside, though, “What We Leave Behind” is a thrilling, action-packed, and emotional mid-season finale forÂ Arrow, one that truly changes the lives of the show’s central characters, whether you look at Curtis, Felicity, or Diggle, who ends the hour by falling into a trap set by the military so that they can re-arrest him for the crimes he never committed.Â ArrowÂ is always at its best when it pushes its characters to their breaking points, forcing them to step up and truly be the heroes we know they are, and the first half of Season 5 has consistently provided many powerful character moments by continually challenging the show’s most important players. Hopefully,Â ArrowÂ continues to up the ante for the remainder of this year, because if it does, the show’s fifth season has a chance to be one of its very best.

What did everyone else think aboutÂ Arrow‘s mid-season finale? Comment below and let me know.

Arrow Season 5 Episode 9 Review: "What We Leave Behind"

Prometheus does everything he can to tear Oliver and the team apart in Arrow‘s fantastic mid-season finale.