Home
The CW
Arrow
Arrow Season 6 Episode 12 Review: “All For Nothing” 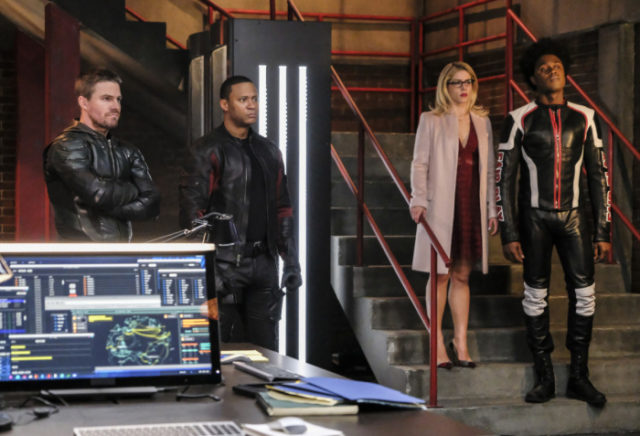 Killing off main characters in this day and age of television is not as big of a spectacle as it once was, so the death of an ancillary character like Vincent shouldn’t have that much of an impact, should it? Emotionally speaking, Vincent’s murder by Black Siren doesn’t come anywhere close to the top deaths we’ve seen onÂ Arrow; however, his passing remains important for one main reason: it reminds the two teams and, more importantly, ArrowÂ viewers of just how high the stakes are for our heroes when they face off against Cayden James. Felicity’s excellent speech in last week’s episode perfectly describes the risks Oliver, Diggle, and the rest of Star City’s heroes take every time they head out onto the streets to fight crime, and the killing of Vincent reaffirms that sentiment. When you’re taking on a villainous mastermind like Cayden James, there will be casualties, and those losses will change the people who live to fight another day.

From the final scene of “All For Nothing,” it’s clear that losing Vincent will dramatically impact Dinah, and while I never fully bought into the romance between the two undercover cops, I am excited to see what an angrier, more unhinged Dinah looks like. (This week’s flashbacks don’t help me believe in the spark between the two of them, but they do express the guilt Dinah feels about what happened to Vince when he went undercover last time and how she feels the need to make up for it this time around.) Essentially, I don’t love how we arrived at this point in the story, but we are here now and it’s a much more compelling direction for Dinah’s character than her secret rendezvouses with her ex. Any conflict created from now on, between Dinah and Oliver or Dinah and Team Newbies, will feel much more genuine and earned than the initial anger that drove her away from the team in the mid-season finale. Plus, Dinah facing off against Black Siren: who doesn’t want to see that?

Furthermore, having Dinah heading down this path doesn’t just open up more exciting story and character opportunities for her; it also gives Oliver the chance to show how he has grown. We’ve seen Oliver in the same place as Dinah before, in this dark, broken hole of existence from which only venom and vengeance can pour out, and he’s been able to climb out of it thanks to Felicity and Diggle. Now that he’s a healthier, more mature Oliver Queen, perhaps he can take a page from his wife and best friend and help his former teammate process the grief and sadness that she’s feeling in a better, less violent way. As Dinah mentions to Oliver during their conversation at the end of the episode, he helped her see the light before, so maybe he can do it again. Similar to last week’s conversation between Oliver and William, any type of guidance he could offer would be a fantastic way to illustrate just how much Oliver has progressed as a character since his breakthrough in Season 5.

But just because Oliver has evolved doesn’t mean that everyÂ ArrowÂ character can. While Quentin spends most of “All For Nothing” believing that there’s some of his Laurel somewhere inside of Black Siren, her actions go against his hopes. Black Siren’s decision to murder Vincent for Cayden James, even if she does so reluctantly, proves that there’s currently more darkness than light in her, and even though it’s apparent that she’s conflicted, I’m not sure if, after all she’s done, she can be redeemed. As powerful as that scene in which Quentin shows Black Siren what his Laurel was like, with photos and videos of her from childhood to her days fighting as Black Canary, I can’t help but feel like he’s wasting his time, and that the writers are wasting the talents of both Paul Blackthorne and Willa Holland on a story that has gone on past its expiration date. I think back to much of the material the two actors had together in Season 5, with Thea helping Quentin battle his addiction and the two of them forging a strong father-daughter connection, and I wish Season 6 would continue to develop that relationship rather than have Quentin obsess over this potential redemption for Black Siren. It feels strained at this point, and plus, I enjoy Katie Cassidy playing a villain so much more than her playing a hero (and from the energy she brings to the Black Siren role, I’d argue that Cassidy herself enjoys being a villain more, too).

As far asÂ ArrowÂ Season 6 goes, “All For Nothing” is a solid but unremarkable installment. There’s some terrific tension involving Vincent’s undercover mission in Cayden’s server room (where Felicity saves him by relaying some tech-babble that stalls Cayden) and, as always, a ton of strong action throughout the hour, particularly from Oliver as he pursues Cayden’s bomb with Diggle during the second-to-last act of the episode. But overall, it’s clear that this week’sÂ Arrow is setting up for bigger things to come. I’m just hoping that whatever happens nextÂ is better than the somewhat rocky startÂ ArrowÂ has gotten off to so far in 2018.

Arrow Season 6 Episode 12 Review: "All For Nothing"

The two separate teams come together and trust Vincent to help them take down Cayden James in a stellar episode of Arrow.