Home
The CW
Arrow
Arrow Season 6 Episode 13 Review: Who Is The Real Villain? 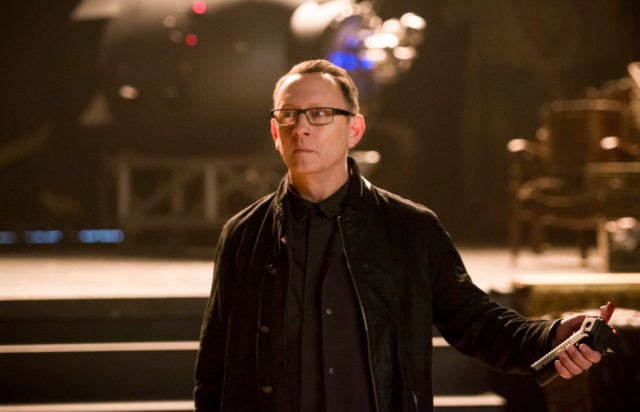 Given the way this week’s Arrow ended, it behooves us to take a closer look at what differentiates Cayden James from past Arrow villains. Cayden James was motivated by a personal vendetta, much the same way Slade Wilson was. However, Cayden’s actions are precisely calculated, with contingency upon contingency in place. He is also not a fan of getting his own hands dirty, which is why he assembled his hodgepodge team of baddies. What we learn from “The Devil’s Greatest Trick” is that one’s greatest personal assets can be twisted into their greatest weaknesses.

One thing that does set Cayden apart from other villains is that on some level, he can be reasoned with. He takes indisputable facts into consideration. So when Oliver shows him the proof that he did not kill his son, Cayden believes him. But he needed to know if it was Diaz, Laurel, or Anatoly who killed his son and set this whole thing in motion. In this case, the enemy of my enemy will not detonate a bomb if he gets what he wants.

Make no mistake, Cayden’s one and only goal has been to make the man he believes killed his son pay for his crime. In Cayden-centric flashbacks, we get a sense of the man he was when his son was still alive. Like most parents who specialize in leading double lives (looking at you Calculator), Cayden wasn’t exactly a hands-on parent. That doesn’t mean that he didn’t love his son, and wasn’t proud of what he accomplished, even if Cayden didn’t quite understand the non-mathematical points of basketball. Cayden was taken into ARGUS custody the same night he promised to attend his son’s game, and he never saw his son again. Is it any wonder Cayden went off the rails? It took Dinah about 5 minutes after Laurel killed Vincent to go into full-on revenge mode.

Despite Cayden’s imminent detonation of a thermoberic bomb on Star City, Dinah could not break her obsession with revenge. And despite Laurel’s actions, Quentin has not lost all faith in this Laurel. Because Laurel did hesitate, if just for a few seconds, before killing Vincent. Does that mean she can be trusted? Absolutely not. Though she confesses to killing Cayden’s son, it’s obvious she just said that for the pleasure of playing mind games.

Now for my one lecture point. Babysitting 101: you do not take your eyes off a child during an emergency situation. If that child is a preteen, you can maybe check-in every few minutes, but always, always check-in. Because William only became apart of his father’s life on a permanent basis this year, we’re still learning who he is. More the point, he is learning who he will become. There was so much drama over William’s existence, and then his integration into Oliver’s life, that not a lot of time was spent questioning how much he is like his father. What William himself is discovering is that much like his dad, he isn’t comfortable sitting around and waiting for news. That in no way means it was a good idea for William to go to Cayden’s interrogation. Yet it is William who makes the difference.

After months of terrorism, Cayden James just gives up. Seeing the bond between Oliver and William doesn’t change Cayden’s mind about bombing the city immediately, but it does make him hesitate long enough for Oliver to paralyze his trigger finger. Anatoly and Ricardo Diaz get away, but Laurel has a different fate. Dinah gets a taste of drawing Laurel’s blood, and it’s clear that she won’t stop until she’s spilled all of it. She’ll have to go through Quentin to get it. In the battle between Black Canary and Black Siren, is Quentin about to become collateral damage?

Collateral damage seems to come around in the most unexpected way. There was really only one logical choice as to who betrayed Cayden. Laurel is not much of a long-term planner, so she is out. Anatoly’s motives were always personal, but aimed specifically at Oliver. Ricardo Diaz was always in this for the long haul, we just didn’t realize how deep he was building his infrastructure. He was always in it to take over the city, not level it, which makes him the first Arrow villain with that motive. Which is why Cayden had to go. He made it too personal, and was no longer an asset to Diaz.

-Is Alena going to be a full-fledged member of the team now? It’s not entirely out of the realm of possibility. She’s like a mini-Felicity, able to take on a lot of hands-on work to lighten Felicity’s load. It also wouldn’t be a bad idea to keep another woman who speaks Felicity in the bunker. Plus, we can tell how much working on Team Arrow has influenced her moral compass.

-I am so proud that Diggle did not throw up when Barry zipped him and Oliver to Cayden! Score one for Diggle’s gag reflex!

-Does anyone else think that all this time in the bunker might inspire William? Perhaps not as a vigilante, but at the very least in some sort of future role involving action.

-All in all, an A+ performance by Michael Emerson all season, but especially for this episode. His final scenes with Stephen Amell were superb, striking the right level of contrite for his actions. All season, Emerson has been the cold, calculating, factual villain. In his final episode, the cracks in his emotional wall broke down bit by bit, piece by piece, until all that was left was the grieving father who wanted to see his son’s grave. In spite of all the destruction Cayden caused, even Oliver couldn’t deny Cayden that closure. Alas, it was not meant to be.

Will Michael Emerson be missed as an Arrow villain? Did he find some kind of redemption before his demise?

The real Arrow villain of Season 6 makes an entrance with a twisted kill.