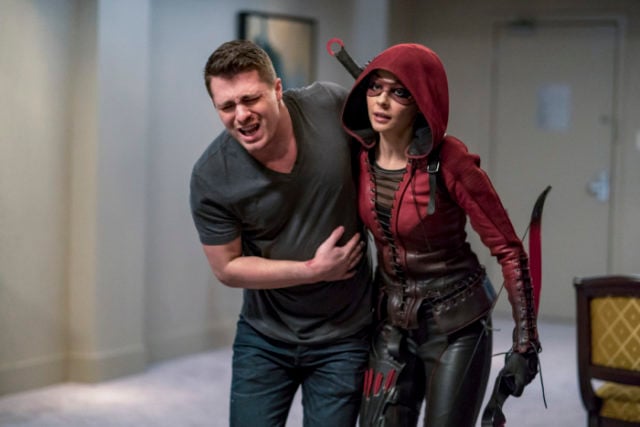 Can Roy Harper be back on ArrowÂ every week again? While “Doppelganger” is by no means a perfect episode, it’s a vast improvement overÂ last week’s low point, and much of the hour’s strengths have to deal with Roy’s return and how it affects the members of Team Arrow. Although Colton Haynes himself doesn’t get to do too much in tonight’s installment, the presence of his character provides Thea with her best story of Season 6 so far while also causing Oliver and Diggle to confront some issues that they have kept to themselves for a while. Sure, everything involving Black Siren remains a mess (even though we do get a quick reprieve from the drama when Quentin and Dinah are forced to work together to weed out the corrupt cops on Diaz’s payroll in the SCPD) and Diaz is still a lackluster villain, but it’s hard to be too critical of those disappointing elements when everything else happening is so damn enjoyable. I’m a simple man: if you give me Thea Queen back in the field as Speedy, solid (if too quick) Felicity/Oliver and Felicity/Diggle scenes, and quality Queen sibling bonding time, I’m going to leave pretty happy, and “Doppelganger” delivers on all three counts.

For much ofÂ ArrowÂ Season 6, Thea has been sidelined, whether she’s been in an actual coma or tied up in a going-nowhere storyline. Part of that may be the writers’ fault, part of that may also just be because Willa Holland’s contract is only for 13 episodes per season instead of all 23. Whatever the reason, though, Season 6 has been lacking when it comes to great Thea Queen moments; fortunately, “Doppelganger” is filled with plenty of them, from her instantly joining Oliver and Diggle in the field as soon as she learns about Roy (“Where are you guys keeping my suit?”) to her and Roy’s back-and-forth banter when she initially tries to rescue him to her nearly taking down Diaz, this season’s big bad, all by herself near the end of the hour. As I tweeted out earlier tonight, “Doppelganger” serves as a reminder that there’s no one stronger and fiercer than a motivated Thea Queen. She knows what she needs to do and she gets it done, and after spending way too much time over the past couple of weeks with the Newbies and their unfounded convictions, it’s a refreshing change of pace to see a supporting character with real depth and substance take center stage. Thea receives the spotlight in tonight’s episode because she deserves it.

But just because Thea’s the focus of this week’sÂ ArrowÂ doesn’t mean that other characters are short-changed. Oliver falls victim to his usual guilt-ridden demons and begins to blame himself for everything that has happened to Roy since he sacrificed his freedom and identity to protect him three years ago. Of course, Felicity is there to remind him that Roy made his own choice, a decision that she and everyone else on the team still believes was the right one. She jokes that if he’s looking for certainty when it comes to his decisions, she can go ask Cisco to find a parallel universe where he does the opposite, but ultimately, she encourages him to trust his gut and have faith in himself because every action he’s taken over the past six years has kept him and most of his loved ones safe and alive, every choice he’s made has led to them to where they are now.

This conversation with Felicity not only assuages Oliver of his guilt but instills in him the strength and confidence to talk with Thea about Roy and how he believes that, after they rescue him, Thea should go with him, wherever Roy decides to go next. Oliver doesn’t hide anything from Thea when he supplies her with his “big brother advice”; he admits that he doesn’t want her to go and that he’ll miss her like crazy. But he also understands that this situation isn’t about what he wants; it’s about what Thea needs in her life, and after hearing Thea talk about how much she still cares for and misses Roy, Oliver knows that what his sister truly needs is the love of her life. Oliver also comes to this realization because he sees so much of what Thea shares with Roy reflected in his own relationship with Felicity. “You’ve seen what having Felicity in my life has done for me,” he says to Thea. “You deserve that same kind of happiness, Speedy. Wherever that is.” It’s another selfless, caring act from this new and improved version of Oliver Queen, which proves that his evolution over the past season-plus hasn’t just made him a better father and husband but also a better brother.

As great as Oliver is to his family, though, it remains to be seen how he’ll navigate a tricky situation with his best friend. Throughout “Doppelganger,” Diggle mentions to both Oliver and Felicity that he’s ready to assume the role of Green Arrow again, not because he believes he has to for Oliver’s sake but because he wants to for himself. Oliver dodges John’s questions about the conflict when they’re out in the field together, but when he and Felicity discuss the issue later in the Arrowcave, he admits that he doesn’t know why he hasn’t let Diggle put back on the hood yet and that he also doesn’t know when he’ll let him take over as Green Arrow again. Even though I’m still not sure how much I fully buy Diggle’s sudden need to be the Green Arrow as a true desire for his character, I am glad thatÂ ArrowÂ hasn’t dropped this storyline completely and is giving David Ramsey more to do than just fight criminals and fire guns. This show is better when it gives Diggle a worthwhile storyline, and I am optimistic that, no matter what direction this story goes in, it will lead to a satisfying conclusion to John’s season arc.

And hey, if this whole Diggle storyline ends up disappointing us all, I at least hope that the ArrowÂ writers will gift us with moreÂ hilarious one-liners from him like his response to Thea’s impatience in tonight’s episode. “If it takes longer than an hour, I’m going to start breaking fingers,” she says to Felicity, who searches through license plates trying to find Roy. “There’s that Queen temper,” Diggle jokes. That’s theÂ ArrowÂ I want. Fun, emotional, and real, with characters who believably care about each other as family. Not the forced, manufactured, unnecessary drama that we were dealt last week. Here’s hoping the series can keep delivering the former instead of the latter when it returns with new episodes later this month.

Thea suits back up as Speedy to help Oliver and Diggle rescue Roy in an entertaining and emotional episode of Arrow.