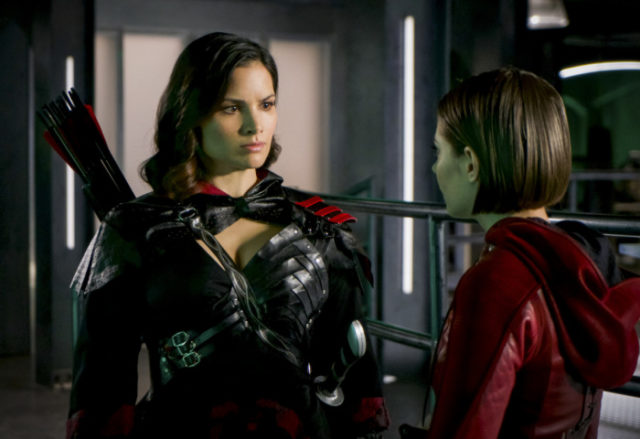 If you’re an ArrowÂ fan who pays even the tiniest bit of attention to what’s happening behind-the-scenes on the CW drama, you were already aware of Willa Holland’s shortened episode commitment for the past two seasons. This was a request Holland herself made to the series’ executive producers in an effort to give her more availability to pursue other projects. Due to Holland’s desire to move on from Arrow, plus the fact thatÂ Thea’s departure from Star City was heavily teased in “Doppelganger,” it was easy to predict that tonight’s installment, “The Thanatos Guild,” would be her swan song. Fortunately, though, the show zigs when I expected it to zag throughout the hour and delivers a farewell to Thea that feels both surprising and (mostly) satisfying.

So how doesÂ ArrowÂ make Thea’s departure from the show surprising? By bringing back Nyssa (the always excellent Katrina Law) and the remaining members of the disbanded League of Assassins, who now call themselves “The Thanatos Guild,” to prevent Thea and Roy from getting the happy getaway they planned to have together at the end of previous episode. The couple’s car ride out of Star City is literally interrupted by an attack from Athena’s followers, and fortunately, Nyssa is there to help fight them off and inform Thea about what the group wants: a map Malcolm left behind that leads to a source of great power and Thea’s help in finding and reading it, since Malcolm guaranteed that his heir would be the only one to do so.

Ultimately, it’s revealed that the map leads to three more Lazarus Pits that exist throughout the world, and Nyssa immediately takes on the task of destroying them all, offering Thea the opportunity to join her since they are both Heiresses to the Demon. By episode’s end, Thea agrees to come with Nyssa (Roy also joins themâ€”more on that in a bit), and it’s a decision she comes to after a conversation she has with Oliver; however, during this talk, it’s Thea giving advice to her older brother and not the other way around, advice that she finds useful for herself when choosing what to do next with her life. When Oliver admits to Thea that he’s unwilling to relinquish the role of Green Arrow to Diggle and he can’t pinpoint why, she smartly tells him that it’s because putting on the hood makes him feel complete. Being the Green Arrow is as much a part of Oliver’s DNA as being a brother, husband, and father are.

While I would push back against Thea’s suggestion that Oliver is his best self when he’s under the hood (Didn’t we just spend all of last season showing how and why that isn’t the case?), her argument for why he’s reluctant to give the role up makes sense. The Queen siblings are people who are not simply satisfied with normal, everyday activities; they need to be of service in a larger way. They need a greater purpose, and for both of them, it appears that this purpose is to make up for the sins of their parents in an effort to create a better world. Thea’s choice to go with Nyssa feels right for her character because she’s always been meant for bigger and better things than domesticity. Just like Oliver, being a sister, daughter, and girlfriend was never going to be enough for Thea. She always was and always will be Speedy, and that’s why, as she explains to Roy, she has to go rectify Malcolm’s mistakesÂ by destroying every last remnant of the League just as Oliver has tried to rectify the ones Robert made by being Star City’s hero.

Fortunately, Roy Harper is the best, and instead of insisting that he and Thea move somewhere with warmer weather and less crime than Star City, he tells her he’s coming with, reiterating what he says earlier in the episode: it doesn’t matter where the two of them go as long as they’re together. “How did I get to be so lucky?” Thea asks. “I think it had something to do with a stolen purse,” Roy quips back. It’s a sweet, tender scene, one that’s only eclipsed by Oliver and Thea’s goodbye to each in the episode’s final scene, a goodbye that intentionally echoes their reunion in theÂ ArrowÂ pilot. “Iâ€™m going to miss you so much,” Oliver tells Thea. â€œYouâ€™ll be with me the whole time,” she responds, referencing what he said to her when he finally returned from Lian Yu.

Is Thea’s final episode perfect? No, not at all. There are no proper farewell scenes between her and Felicity, her and Diggle, and, worst of all, her and Quentin. Much of the episode’s action is a letdown; it’s darkly lit, unfocused, and confusing to the point where it’s sometime difficult to pinpoint who is fighting whom. Too much time is spent on Curtis’s romantic life (Really, at this point, who cares?) and his and Dinah’s investigation into Captain Hill, who we already knew was shady.

But there’s also plenty of terrific brother-sister moments between the Queen siblings, including Thea joking to William about the night-light Oliver had until he was 16. There’s powerful themes of legacy, independence, and honor, which are fully on display during multiple interactions between Oliver and Thea, Thea and Nyssa, Thea and Roy, Oliver and Nyssa, and even Oliver and Diggle. And there’s also too many tremendous one-liners to list, most of them delivered by Felicity, Nyssa, and, of course, Thea, who, no pun intended, remains the Queen ofÂ ArrowÂ One-Liners.

Overall, “The Thanatos Guild” is a mostly fitting sendoff to one ofÂ Arrow‘s very best characters, one I hope is more of a “See you later” than a “Goodbye forever.” I know Willa Holland is no longer a series regular and is going off to pursue new opportunities and join different projects, but beforeÂ ArrowÂ is officially over, I’m going to need to see Thea Queen return. Her character and her relationship with Oliver is too important to the show’s DNA to be forgotten. No matter what the writers do, though, I know I’ll always remember Thea’s scenes onÂ ArrowÂ as some of the best moments in the show’s history.

What did everyone else think about this week’s episode ofÂ Arrow? Did you find it to be fitting farewell for Thea? Comment below and let me know.

Nyssa returns to Star City, and Thea and Roy make an important decision together in a solid episode of Arrow.