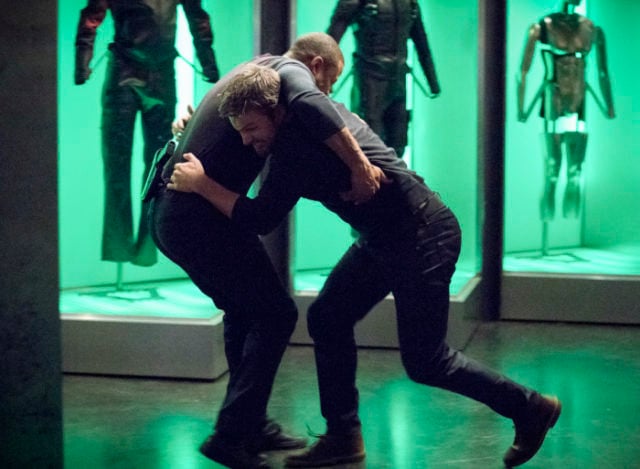 Tonight’s episode of ArrowÂ is worth watching simply for one scene around halfway through the episode. After talking with Lyla and getting to the real root of his frustrations, Diggle has a moment alone with Oliver and admits that his problems with his friend don’t stem from the Green Arrow uniform but the man underneath it. Diggle claims that, during this past year, Oliver’s attention has shifted too much from Team Arrow to his family, Felicity and William, and his work as mayor. According to Diggle, instead of doing what’s best for Star City, Oliver has been more focused on what’s best for himself, and while Diggle has watched him become a better man, he’s also witnessed him become a worse leader. Diggle questions every single decision Oliver has made, not just recently but throughout the years, pointing to the people he’s alienated and the trail of bodies that he’s left behind. Finally, in response, Oliver tells Dig that “My trail of bodies doesn’t include my own brother,” and that’s when the verbal fighting becomes physical, as the two men punch and tackle each other, breaking glass, monitors, and more inside the Arrowcave.

That scene is worthwhile for two reasons. First, even though Diggle’s behavior is wildly out-of-character (I’ll touch on that more soon), he does bring up some compelling points about leadership and the sacrifices heroes must make. But if he’s had these problems with Oliver’s decisions all along, I wish he had brought them up as the choices themselves were being made. Oliver and and Diggle have always engaged in debates and discussions over morality and ethics; in fact, they’re some of Arrow‘s very best scenes, and more in-the-moment conflicts like that would have been much more authentic and exciting than the half-baked fight we got tonight.

More effective than the points being made by Dig in that scene, though, are the performances being given by Stephen Amell and David Ramsey, who do a fantastic job of elevating the frustrating and, at times, downright perplexing material they’re given. Amell and Ramsey have always been strong performers, so this shouldn’t be a surprise to longtime viewers. Their chemistry is a major reason why the Oliver/Diggle friendship has become an essential component ofÂ Arrow‘s DNA, and whether Oliver and Diggle are having a heart-to-heart or battling against each other like they do in “Brothers in Arms,” Amell and Ramsey always light up the screen when they share it together.

The two actors provide an energy and intensity that’s only replicated in Amell’s scenes with Emily Bett Rickards and, on occasion, Willa Holland, and during tonight’s hour, that intensity comes through the fiery yet measured anger that builds between Oliver and Diggle with each word they say to one another. You can feel the rich, complex history of Oliver and Diggle as Amell and Ramsey deliver each line; these are two men who don’t want to hurt each other but know exactly what to say to torture one another in the worst way. When Diggle mentions the “trail of bodies” Oliver has left behind, he knows that he’s reigniting Oliver’s guilt over Tommy, Moira, and Laurel, the guilt that he spent so much of Season 5 trying to recover from. Diggle knows it’s the absolute worst thing he can say to his best friend right now, and that’s why Oliver counters by bringing up John’s greatest regret, the sin that caused him to retire from Team Arrow and re-enlist: his killing of Andy. The fight between Oliver and Diggle is brutal and messy and that’s before the fists start flying. I just wish it had been founded on something honest and real. Instead, it’s the latest example ofÂ ArrowÂ putting the needs of the plot over the authenticity of its characters, a problem that has reared its ugly head way too many times throughout the back half of Season 6.

To compromise Diggle’s character is to compromise the show as a whole, and for what reason? What’s the endgame here? To have Oliver be desperate and isolated again? We’ve been there and done that, except in the past, characters have actually had valid reasons to be upset with him. In Season 6, though, the writers are letting the plot dictate everything; they want Oliver to feel weak, alone, and helpless as Diaz continues to control every aspect of Star City. But we’ve been here before, just last season with Adrian Chase, and it was a thousands times more effective because it was a personal journey of growth and redemption for Oliver. In Season 6, however, there’s no compelling arc. It boils down to one, simple fact: all of Oliver’s teammates are being childish, immature, and selfish. If they all really had Star City’s best interest at heart, they would be coming together, using all resources available, to stop Diaz. Instead, they are letting petty disagreements push them down different paths, paths that won’t lead to any type of resolution until Team Arrow fully reunites.

But at this point, if you’re Oliver, why would you want that? Why would you want to be surrounded by a group of individuals who does nothing but second-guesses your every move, a group that is always there to tell you what you did wrong but never there to cheer you on when you make the right call? I know I wouldn’t want to be around the likes of Curtis, Rene, and even Diggle right now, and I certainly don’t want to watch any of them on my TV. The majority ofÂ Arrow‘s characters have become unrecognizable and unlikable shells of their former selves, and that’s a way bigger problem than whatever Diaz, Black Siren, and Anatoly are cooking up.Â We’ve got six episodes left in Season 6. Fix this,Â ArrowÂ writers.

What did everyone else think about this week’s episode ofÂ Arrow? What are your thoughts on Season 6 as a whole as we move into the final stretch of episodes? Comment below and let me know.

Powerful performances from Stephen Amell and David Ramsey elevate an underwhelming and frustrating episode of Arrow.