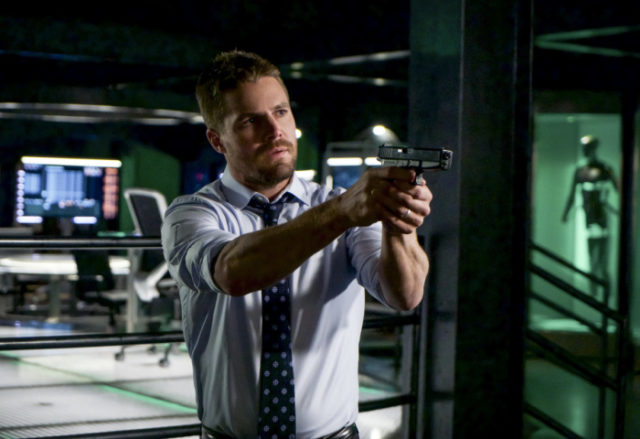 “Fundamentals” is an odd episode of Arrow. Overall, it’s an entertaining hour with a terrific lead performance from Stephen Amell, who has been underutilized throughout much of Season 6, despite being the lead of the series. This deep dive into Oliver’s psyche is exciting, enlightening, and sometimes even hilarious, thanks to Josh Segarra reprising his role as Adrian Chase, whom Oliver continues to hallucinate due to the Vertigo that has been planted in system by Councilman Collins, another corrupt ally of Diaz’s. However, even though I enjoyed individual moments in “Fundamentals,” from the opening action sequence of Oliver taking down all of the corrupt cops to Felicity convincing him that she’s real later on in a pivotal scene (absolutely love how she refers to herself as “glue”), the episode never truly comes together by the end of the hour, and that’s because of the conclusion Oliver reaches and the decision he makes.

On its own, Oliver choosing to protect Star City all by himself again is an idea with some potential. There could be a lot of story having to deal with the challenges he faces in the field and whether or not he feels free and focused by himself or if he feels hopeless and alone. The problem is, though, so much ofÂ ArrowÂ Season 5 was spent proving to Oliver (and us as viewers) that he was stronger with the people he loved around him. For those who remember, Season 5 begins with Oliver still mourning the loss of Laurel and the departure of Diggle (who had returned to the military at that point), and he insists that he doesn’t want to form a new team, that he doesn’t want to work with anyone else. But then Felicity keeps encouraging him because he can’t do this alone, because Oliver Queen as both a person and a hero needs people he cares about around him, to fight alongside himâ€”they give him strength.

That’s what last season was all about: Oliver’s growth and development from a vigilante to a hero, from a killer who had cut himself off from all emotions to a man who was open to love from others and ready to be a husband and a father. Oliver realized he didn’t have to choose between being the Green Arrow and Oliver Queen, he understood that both parts of himself gave him strength, and he knew that bringing the them together, that being a hero, a friend, a husband, and a father, is what made him the most complete version of himself. But now because of Diaz (I mean, really, Diaz?!), he thinks he has to compartmentalize again and return to who he used to be, that he has to go out in the field alone when just earlier this season in “Reversal” he was shown how essential Felicity is to his life both as the Green Arrow and as Oliver Queen. And I’m supposed to look at this arc and see it as character development and not regression that has been put upon Oliver because the writers mistakenly thought it would be dramatically satisfying to watch him be stripped of everyone and everything again for the umpteenth time? I’m sorry but that’s too hollow and inauthentic for me to believe in and to enjoy.

There is one bit of truth that comes out of Oliver’s drug trip, though, and it’s spoken by his hallucination of Chase. As the two of them talk in the Arrowcave, Adrian tells Oliver that none of the foes he’s faced in previous seasons have been his worst enemy, not Chase or Damien Darhk or Ra’s al Ghul. The person who has always been Oliver’s worst enemy is himself; Oliver is his own greatest fear, and there’s truth to that. Look to Oliver’s conversation with Quentin earlier on in the episode, when they discuss how much he’s evolved over the past several years. When reflecting on why all the people in his life are leaving him, Oliver immediately turns to the worst possible reason: that he hasn’t changed at all. Fortunately, Quentin quickly points out what nonsense that is (and it’s the most sense Quentin has made in quite some time), explaining that by becoming a better man Oliver has become a different man, and some people will always react badly to change, no matter what it is. As Quentin tells Oliver, the problems that Diggle, Dinah, Rene, and Curtis have don’t actually have anything to do with Oliver. Instead, they are problems of their own making, but they have laid the blame at Oliver’s feet because he’s an easy scapegoat; as their leader, he’s the obvious choice to blame because they look to him for assistance and don’t want to take responsibility for their own shortcomings when he can’t provide it.

That’s why I understand why Oliver wouldn’t feel the need to bring any of them back on to Team Arrow right now. His head needs to be clear and focused, and he can’t do that when others are blaming him for issues he never created. But why take Felicity off the team? Why remove the glue that has always kept Team Arrow together, the glue that has helped rebuild and reshape the team when it’s been at its most broken? Why turn away the woman who has been by your side through all of your highest highs and lowest lows, the person who has not just helped make you a better hero but a better man? How does Oliver sincerely believe that going “back to basics” and removing her from the team gives him a better chance at stopping Diaz?

It’s that conclusion that Oliver reaches at the end of the episode that taints an otherwise inventive, emotional hour ofÂ Arrow, anchored by some of Stephen Amell’s strongest work of the season (that’s back-to-back great episodes for him). Hopefully, Oliver wakes up soon and realizes that he needs others around him to the best Green Arrow he can be. He may want to choose more wisely next time and find allies that won’t turn on him for artificial reasons (that the writers cooked up for plot instead of character, but I digress). However, he also has to remember that you never bench your star player, especially when she’s shown up and played her best in every single game. The Green Arrow needs Felicity Smoak just as much as Oliver Queen needs Felicity Smoak, and she shouldn’t have to remind him.

What did everyone else think about this week’s episode ofÂ Arrow? Am I being too harsh on Oliver’s choice? Do you see it differently? Comment below and let me know.

Stephen Amell delivers a terrific performance as ghosts from Oliver’s past return to haunt him in an entertaining episode of Arrow.