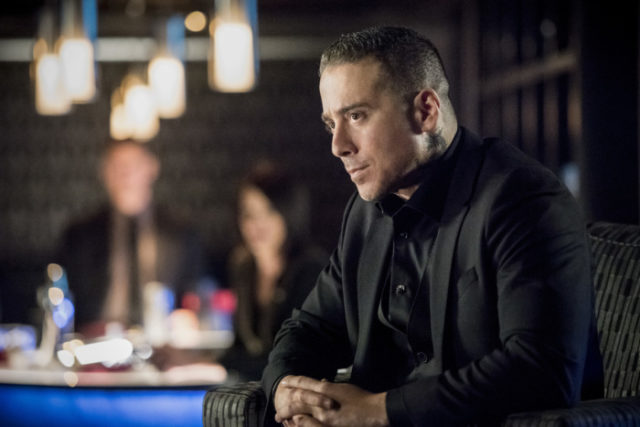 The only thing worse than a bad episode of television is a boring one. Unfortunately, this week’s ArrowÂ is dreadfully dull from start to finish, as the series dedicates an entire hour to the origin of Season 6’s main villain, Ricardo Diaz, aka The Dragon. Kirk Acevedo does the best he can with the material he’s given throughout “The Dragon,” as we learn of Diaz’s orphan past and discover that his current mission is to join the criminal organization known as The Quadrant. The members of The Quadrant are the types of people that Diaz has always despised: the rich, entitled elitists who look down on those who come from nothing, who call him a street thug rather than the crime boss he believes he’s become. However, inside of Diaz is a burning desire to prove them wrong, a need that was created by Jesse, the older boy who tormented him at the orphanage where he grew up, a past humiliation that Diaz has still not gotten over to this day.

If this story sounds familiar to you, it’s because Diaz’s origin is pretty standard fare when it comes to villains. They’re not born evil; they’re created by those who are evil to them. This type of unoriginal storytelling is why “The Dragon” is such a flat, predictable, and underwhelming episode ofÂ Arrow. In an effort to give Diaz more depth, to turn him into a worthy foe of Oliver’s instead of just a stock villain, the show’s writers attempt to instill more meaning into the motives of Diaz; they want to make him more damaged and complex, so that he becomes something other than the common criminal that he’s been portrayed as throughout most of Season 6.

However, not only is it too late in the season for that type of transformation to happen, but the storyÂ ArrowÂ is telling is so uninspired that it actually makes Diaz even less compelling. This villain, who we’ve been told is more threatening than any antagonist Oliver has faced before (Black Siren even compares Diaz to Adrian Chase in this episode, which is just laughable), is essentially a bullied kid who physically grew up but never did emotionally. Diaz is too immature to most past his childhood wounds, as he lets the presence of Jesse continue to haunt him no matter how much money he makes or how much territory he takes over, until he finally kidnaps the now adult Jesse in the episode’s final moments and burns him alive. It’s petty, childish, and tedious, and I don’t feel a single emotion as we watch Diaz’s journey throughout “The Dragon,” not even the anger or sadness I’ve felt at Diggle or the Newbies during the back half of this season. Instead, I’m yawning, waiting for the scene to end so we can get back to Felicity or (God help me) even Curtis, because those characters are vibrant in a way that Diaz never has been and never will be.

But even whenÂ ArrowÂ focuses on characters who matter in this week’s episode, it still disappoints. While it’s satisfying to see Felicity and Curtis moving forward with Helix Dynamics, their scenes together are tainted because of how insufferable Curtis has become in recent episodes. In “The Dragon,” he somehow gets Felicity to apologize to him about Rene’s injuries (which, I remind you, never would have happened if Rene did not try to attack Oliver with an ax and simply stood down like Oliver told him to), and he makes a snide remark about struggling to not take satisfaction in the news that Diggle has left Team Arrow. While it’s important to gain insight into how Felicity is responding to Oliver’s decision to head into the field solo again, she should be talking with someone else other than Curtis about these issues. Thea, if she was still around. Or Quentin. Or even Diggle, despite how strained their friendship might be right now. To have Felicity confide in a person who clearly doesn’t respect her or her husband, in someone who has taken zero responsibility for his actions in recent months and laid all the blame at her, Oliver, and Diggle’s feet, undercuts the weight of her concerns and makes her seem like a weaker character than she actually is.

And speaking of weak characterization,Â ArrowÂ manages to mishandle Oliver Queen during his one and only scene in “The Dragon.” In concept, his promise to Felicity, the same one that he previously made to William, that he will always come back, is caring and sweet, but this declaration also comes after Oliver insinuates that Felicity hasn’t and wouldn’t help him in the field as Overwatch. “Because when you’re in the bunker you feel like you can make a difference,” Oliver says to Felicity, a claim that she thankfully rallies against. And even though Oliver follows that statement by telling Felicity that she’s never been helpless anywhere, it doesn’t rectify that his previous comments completely contradict his words to Felicity in “Reversal,” an hour ofÂ ArrowÂ that reaffirmed to Oliver just how important it is for him to have Felicity in all parts of his life, as Green Arrow and as Oliver Queen.

Over the past two episodes, Oliver has been behaving so out of character that I have no idea what he’ll do or say next, which isn’t exciting. It’s frustrating. I watchÂ ArrowÂ because I love these characters, because I know these characters, because I have faith in these characters to be the strong, complex, and compelling people I’ve watched them be for five-plus seasons. But right now, I don’t have faith in theÂ ArrowÂ writers, who have been sacrificing the authenticity of their characters on a weekly basis in order to satisfy the manufactured plot they’ve cooked up, and it’s going to take a hell of a lot more than some impressive action scenes or witty one-liners for me to begin trusting their choices again.

What did everyone else think about this week’sÂ Arrow? Comment below and let me know.Â

Diaz’s origin is revealed as he tries to solidify his status as a crime boss in a dull, predictable episode of Arrow.