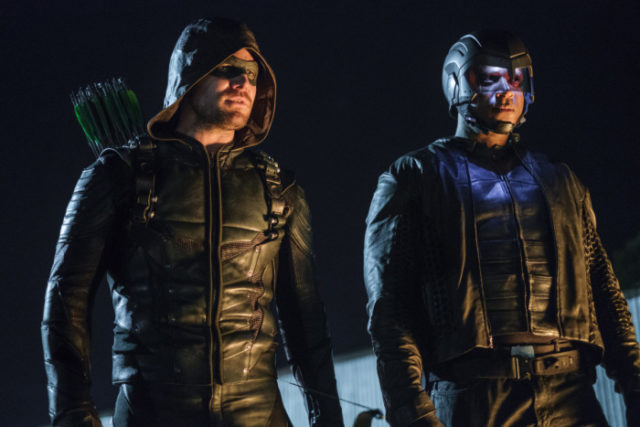 In my review of last week’s ArrowÂ premiere, I mentioned how Slade’s line about Oliver having to choose between being Star City’s hero and a father to his son most likely represented Season 6’s major conflict. I believed that similar to seasons past, which have focused on Oliver Queen struggling to discover his own identity and trying to come to grips with whether he was more hero or villain, this inner turmoil would be the driving force behind the majority of this season’s 23 episodes. I never in a million years would have expected that by the end of “Tribute,” only Season 6’s second episode, Oliver would have made as a dramatic of a choice as he does by passing on the Green Arrow mantle to Diggle in an effort to keep his promise to William that he’ll always be there, that he’ll always come home to him. This is the type of game-changing decision thatÂ ArrowÂ typically reserves for the later half of its seasons, and the fact that it has already occurred in Episode 2 has me curious how long Diggle’s stint as Green Arrow will last for and how the rest of the team will respond to their leader stepping down and handing over the reigns to Dig.

Of course, this is isn’t the first time that Oliver has stepped away from being the hero of Star City. He did it at the end of Season 1 and also at the end of Season 3, but his reasons for those actions were so much different than his decision here. In both of those previous instances, Oliver’s choice to leave the hood and bow behind were born out of somewhat selfish reasons. At the end of Season 1, his guilt and grief over Tommy’s death (and over how Tommy only saw him as a killer, never a hero) drives him to return to Lian Yu, the place that, in many ways, created the Green Arrow. Meanwhile, at the end of Season 3, Oliver leaves Star City in the capable hands of the team he has created and goes off to live a more simple, satisfying life with Felicity, a life he can live solely as Oliver Queen and not as two separate entities.

However, in Season 6, Oliver decides to step down because he now has something in his life that’s greater than his own wants and needs: he has William. In last week’s premiere, Oliver told William that he could hate him and ignore him but that Oliver would always be his father and that he would never leave him. Similarly, in “Tribute,” when William expresses his fear that Oliver might not make it back from a mission as the Green Arrow, leaving him alone as an orphan, Oliver promises that he will always come back, that he will always be okay. That lie that Oliver tells William in the car ride home from school, after Oliver goes to pick William up once he gets a call that he has been in a fight, eats away at him for the rest of the episode, and it’s Oliver’s conversation with Rene, in addition to the fact that FBI Agent Watson is trying to interrogate William, that really leads him to make the choice he does at the end of the hour. Oliver can’t just paint what he said to William as a “white lie”; his promise to always make it home alive isn’t the same thing as telling Zoe she came from a cloud. Oliver Queen is a person that understands the overwhelming anguish one can feel when they lose both of their parents, and that pain almost destroyed him when he dealt with it as a fully grown adult. Imagining William having to endure that as a child is too much for Oliver, and it’s what ultimately motivates him to pass the title of Green Arrow over to Dig.

Unfortunately, though, Oliver remains unaware to that Diggle might not be the perfect candidate to suit up as the Emerald Archer. Dig does possess the integrity and fortitude to lead the team, but as we saw in last week’s premiere and witness again in “Tribute,” his physical injuries from the explosion at Lian Yu, which are confirmed to be degenerative nerve damage, prevent him from being 100% in the field. In fact, Dig’s physical condition almost costs Dinah her life as they battle the Bratva, and it is that incident that makes Diggle decide it’s time to tell Oliver the truth about the nerve damage. However, Oliver asks Dig to be the Green Arrow first, and in an effort to not disappoint his best friend and give him the freedom he needs to be the best father possible, John agrees to take on the role.

This choice by Diggle illustrates how much he truly loves and cares about Oliver, but it also displays how naive and foolish he is being about his condition. As Dinah continuously reminds him throughout “Tribute,” he is putting everyone on Team Arrow at risk just by being a member. How much potential harm could he cause now that he is its leader? Will Dinah reveal the truth about John to the rest of the team? How will Oliver and Felicity react once they find out? All of these questions are what make Oliver and Diggle’s decisions in the final scene of “Tribute” so dynamic. This passing of the torch is supposed to create more security and stability for Team Arrow, but given what we’ve seen from Dig over the past two episodes, it looks like it will more than likely lead to the opposite.

Anatoly returns to Star City to cause trouble, and Oliver makes a life-changing decision in a strong episode of Arrow.