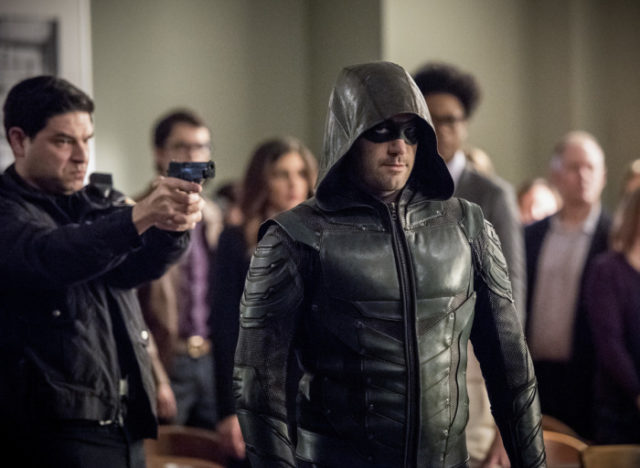 It’s been a while since ArrowÂ has truly felt likeÂ ArrowÂ to me. As I’ve mentioned countless times in my reviews of the past few episodes, Season 6 overall has been a major disappointment, a season that has disregarded consistent characterization in favor of manufactured drama and spent way too much time trying to establish its main villain as a compelling antagonist byÂ tellingÂ us how dangerous he is instead ofÂ showingÂ us. I’ve been frustrated with the series not because I dislike it or am bored with it but because I know that the creative team has the capacity to give us better stories, to focus on the characters that matter most and allow them to act logically and authentically. I know thatÂ ArrowÂ still has the ability to beÂ Arrow, and fortunately, this week’s episode,Â “Docket No. 11-19-41-73,” finally captures the spirit of the show I’ve passionately watched and written about over the past six years.

So why does this week’sÂ ArrowÂ work so well, even with the walking, talking plot device that is Christopher Chance showing up and saving Oliver from going to prison? The answer is simple: the characters. In Oliver’s moment of need, everyone from Diggle to Felicity to even Rene (more on him later) steps up to help him in ways big and small, despite whatever other issues they have with him at the moment. So even though Diggle no longer joins Oliver out in the field, he still travels to Kasnia to recruit Chance so he can get him toÂ  impersonate Tommy Merlyn as the Green Arrow (So nice to have you back again, Colin Donnell!) and hopefully get Oliver acquitted. While Felicity remains frustrated with Oliver’s decision to bench her and save Star City alone (For the record, I also remain frustrated by that choice), she still has the fortitude and grace to testify for her husband, be a mother to William, and, most importantly, remind Oliver that the two of them “fight for each other. We protect each other. We’re going to save each other.” And while Rene is still, unfortunately, Rene (Explain to me why Oliver is a jerk again, Rene, after everything he’s done for you?), he can at least finally recognize that Oliver is in this terrible position because of him and does everything he can to make up for his past mistakes.

However, before Rene comes up with the plan to replace the judge with Chance and save the day, he still takes the stand and admits that Oliver is the Green Arrow while Diaz holds Zoe captive in front of him in the courtroom. This choice undercuts his actions later in the episode, as it shows that Rene never really learned anything and doesn’t trust either team, OTA or the Newbies, to help save his daughter. Furthermore, it makes me question Rene’s resolve as a hero in Star City if he’s willing to buckle to pressure so quickly yet again. We’ve seen Oliver and others not succumb to the tactics of villains, even if they’ve been holding family members hostage, throughoutÂ Arrow‘s five-plus seasons, but Rene has chosen himself over his teammates twice now. His apology to Oliver and their conversation at the end of the episode is a good first step in fixing Rene’s image (which some, like myself, still believe is pretty irreparable), but given this pattern of behavior, I’d rather see him hang up the Wild Dog suit at the end of the season and focus on being a father to Zoe. It’s clear that she tops the list of what’s most important to him and that’s fine, but it’s also pretty clear that Dinah, Curtis, Diggle, and certainly Oliver don’t crack that list.

Still though, Rene has a couple strong scenes throughoutÂ “Docket No. 11-19-41-73,” and that’s mainly because these moments involve Oliver, who has been sidelined for much of the past two weeks. Thankfully, this week’sÂ ArrowÂ gives us a lot of Oliver Queen, and Stephen Amell absolutely delivers in every single scene he’s in. In particular, Amell shines when Oliver admits that he’s the Green Arrow to Jean Loring, explaining that he won’t go public with the information because he wants a life after he hangs up the hood for good and that won’t be possible if people know his true identity. Amell even packs an emotional punch with just his facial responses to certain moments, such as when he see Chance as Tommy and when he hears the judge announce the verdict in his case.

However, both Amell and Oliver’s best moments come during scenes with Felicity and William, when Oliver is allowed to be his most vulnerable, his most human. When he’s finally alone with Felicity, after Chance has made his appearance as Tommy, Oliver prepares for the worst-case scenario, telling her that she and William need to go into ARGUS protective custody if he’s convicted. “I can handle losing my freedom,” he tells her. “I cannot handle losing you and William.” And in that moment, we again see the transformation of Oliver Queen from lone-wolf vigilante to husband and father, from hero to human. Being free and able to protect the city means nothing to him if he doesn’t have people in his life to fight for. What started out for him as a vengeful vendetta has become a battle for his home, not just the streets and the buildings that make up Star City but the people who fill it, and he knows that his mission wouldn’t matter any more without those who are most important to him by his side.

That’s why Oliver he saves his most powerful words for William.Â “Whatever happens and wherever I am, you need to know that I am always right here with you,” Oliver says to his son, pointing at his heart. Over the course of Arrow‘s five-plus seasons,Â Oliver Queen has become so much more than a man underneath a hood, battling criminals. He’s been a brother, a friend, a teammate, a husband, and now a father. He’s allowed people to enter his life and fill it with love and compassion and understanding, and in return, he has shown them the importance of selflessness, determination, and courage.

After five years of torture and death and betrayal, Oliver returned to Star City and found a way to open himself up again to others, and even when so many of them have turned away from him this season, he continues to be open with Felicity and William and now even Rene. That’s because putting on a green suit and carrying a bow and arrow is not what makes Oliver Queen a hero. Being brave enough to overcome his past trauma and rediscover what joy and hope and connection are is what has always made Oliver heroic to me. I’m glad the ArrowÂ writers are beginning to remember that. Oliver is the best version of himself, as a man, as a mayor, and as the Green Arrow, when he surrounds himself with the people he loves. Here’s hoping he continues to do so in the final two episodes of Season 6.

What did everyone else think about this week’s episode ofÂ Arrow? What are you hoping to see from the show’s final two episodes of the season?

Rene, Black Siren, and other characters make major decisions during Oliver’s trial in a strong episode of Arrow.