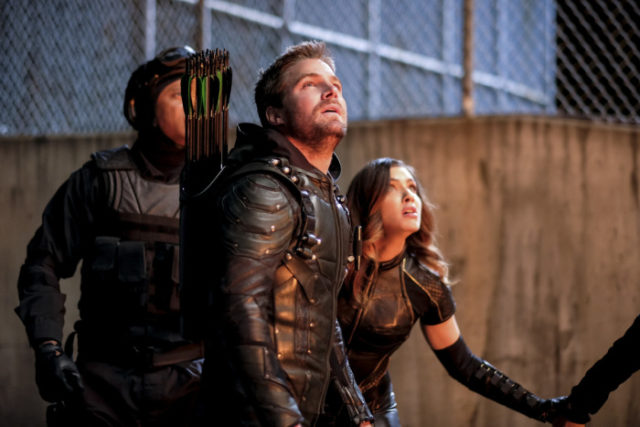 “The Ties That Bind” is easily one of the best episodes of Arrow Season 6, because similar to last week’s courtroom-focused hour, it focuses on Team Arrow doing what it does best: communicating with each other in honest, genuine ways and working together to stop Diaz and save the city. These past two installments show how impressive the team can be when its members aren’t distracted with childish bickering and unnecessary power struggles; more importantly, though, it illustrates how much of a better TV series Arrow is when its characters behave like actual people, individuals who have been friends and teammates for multiple years, rather than interchangeable pieces that are only there to service the plot. How compelling “The Ties That Bind” is from start to finish feels like a breath of fresh air after episodes like “Brothers in Arms” and “The Dragon” because characters like Oliver, Diggle, and Dinah actually act like themselves. However, it’s also frustrating to see how capable the Arrow writers are during hours like this and be left wondering what the hell happened with almost the entire back half of Season 6, which has been filled inconsistent characterization supporting hackneyed plot and after hackneyed plot.

But enough of me complaining. I’ve done that enough of that this season, and aside from the screen time that Diaz and Curtis have during this week’s Arrow, nothing about the episode really bothers me. In fact, the episode rectifies a lot of this season’s more recent mistakes, namely Oliver’s decision to go back out in the field alone and push Felicity away from her position as Overwatch. Over the past couple weeks, we’ve seen Felicity express her frustration over her husband’s decision to sideline her, but once Diaz’s men attack the loved ones of everyone on the team, Felicity won’t let Oliver’s regressive attitudes prevent her from joining the fight.

And really, let’s call out Oliver’s recent behavior for what it is: regression. After five-plus years of witnessing how essential Felicity has been to his saving of Star City, especially in “Reversal,” which I still think is this season’s best episode by a wide margin, Oliver choosing to kick her off Team Arrow makes zero sense, even with his newfound belief that he can’t split his focus in order to stop Diaz. If Diaz truly is the greatest threat he’s ever gone up against (Let’s stop laughing for just a second and pretend that he is, my friends), then how does Oliver honestly believe that he can take him down by himself? By reverting back to his vicious, murderous ways as the Hood, the same methods that he had to accept and forgive himself for at the end of Season 5 after Prometheus tortured him? Again, it doesn’t make any sense, and it’s simply a byproduct of plot dictating character’s actions.

Fortunately, “The Ties That Bind” doesn’t let Oliver off the hook with that nonsensical decision. In fact, many of the episode’s best moments are people telling and showing him why he’s wrong. When Oliver tries to deter Felicity from copying and decrypting the files on Diaz’s drive, she fights back against him, expressing the same idea that I’ve been writing in my Arrow reviews for weeks: the two of them together give each other strength. As Felicity explains to Oliver, now that they are married and parents to William, there is no more “going in alone” for them; they are a team when they are at home and when they are in the bunker, and there is no separating the two.

Honestly, why should there be any type of separation? We’ve seen Oliver try to compartmentalize before back in Season 3, which only led to him lying to the team and pushing those he loves most away. We’ve been down this road before with Oliver, and we know it doesn’t work, just like Felicity knows it doesn’t and just like Diggle knows it doesn’t, which is why he tells Oliver as much when they discuss the issue after Felicity is almost shot by Diaz. Oliver says that by keeping Felicity out of the field and away from danger he’s doing what Dig told him to do, not splitting his focus and or being distracted anymore; things between him and Felicity can’t be the same because circumstances have changed. They’re married now. They’re parents now. But Diggle counters with a more important point. “The truth is you were there for her tonight in the same way that she’s been there for you as Overwatch,” Diggle says, telling Oliver that regaining his focus shouldn’t mean turning away from everyone and everything he loves in life. While Oliver and Felicity’s circumstances have become different because of the wedding and because of William, that doesn’t mean their relationship itself is different at all.

As Felicity said on the stand in last week’s episode, she’s loved Oliver Queen for six years. During that time, the two of them have butt heads and broken up but they’ve always been there for each other when it counts, bringing out the best in each other and supporting each other in ways that no one else has. Why should everything change now because of the wedding bands they wear? Why should everything change now because they have a son they need to care for? If a person is your strength, you need to lean on them when times are hard, when curveballs get thrown your way. Oliver has become a better hero because of Felicity, a better father because of Felicity, a better man because of Felicity. Oliver pushing her away in any capacity, whether at home or in the bunker, is a lack of trust in Felicity and himself, and it won’t allow him to improve any facet of his life–it will only hurt him. And we’ve already seen that happen in recent weeks, as Oliver has been captured and beaten and stabbed and arrested without Felicity’s aid in the field.

Thankfully, “The Ties That Bind” has Oliver realize the error of his ways, and he apologizes to Felicity, the only apology he should be making this season (the one he makes early on in this episode to the Newbies and Dig is a bunch of BS that he should not be forced to say). “I shouldn’t have pushed you away,” Oliver says to Felicity. “I should have trusted you to keep yourself safe, and I should have trusted myself in my ability to help keep you safe.” That issue of trust, of having faith in Felicity and himself to overcome whatever challenges may await them, is a lesson that Oliver learned last season in “Underneath,” and fortunately, it only takes him a couple episodes and not a whole season to remember the importance of it. Felicity remains steadfast throughout Oliver’s crisis of faith here in Season 6, proving again why she’s his most loyal and understanding supporter and most reliable source of honesty and advice. He initially taught her what it means to be a hero, but throughout their years together, she’s shown him how to be a better one. If that’s not strength, I don’t know what is.

And judging from Oliver’s decision to turn to FBI Agent Watson for help and out himself as the Green Arrow to her in this episode’s final scene, he’s going to need a lot of strength to get through next week’s Season 6 finale. Lucky for him, Felicity Smoak’s not going anywhere. She never has been, and she never will be. She’s glue, baby.

Diaz targets Felicity, William, and the rest of the team’s loved ones in one of the best episodes of Arrow Season 6.