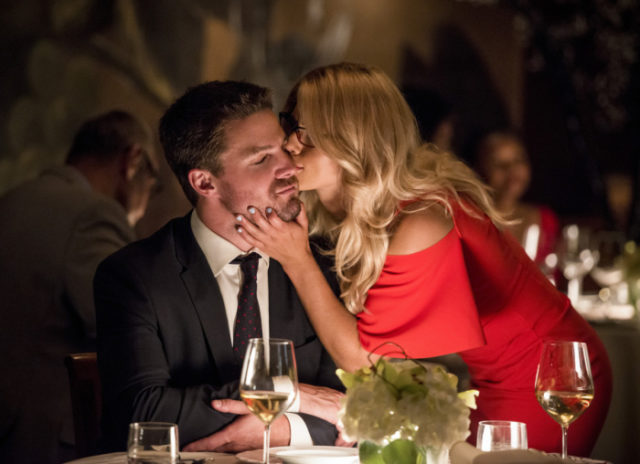 Well, the ArrowÂ writers certainly got the title of tonight’s episode right, didn’t they? “Reversal” can refer to a couple of different storylines we see throughout tonight’s hour, such as the transformation of Cayden James (played by the always amazing Michael Emerson) from hacktivist to super villain, or Alena turning to Felicity for help instead of providing her with assistance like Helix did last season. But let’s be real here, folks: the true “reversal” that the episode’s title is referring to is the one that Felicity and Oliver undergo, as the two of them completely switch roles throughout the hour, both in their personal and “professional” lives, resulting in a clever, comedic, and, ultimately, incredibly heartfelt storyline that proves once again just how vital the Oliver/Felicity relationship is toÂ Arrow‘s DNA.

In my review of last week’s episode, I mentioned that, as much as Oliver praised Felicity for making his life better, he also did the same for her. However, I made sure to state that he helped Felicity in much different ways than she helped him. In “Reversal,” though, that fully changes, as Oliver tries walking in Felicity’s shoes (and actually does sit in her Overwatch chair near the end of the episode), becoming the support system that Felicity needs when she struggles with the guilt and regret of helping Cayden James escape. Oliver takes all of the words of wisdom that Felicity has given him over the past five years, her speeches of encouragement and inspiration, and restates them in his own Oliver way. As he jokes with Felicity, she always sounded smarter when telling him these things, but the message of his comments still rings true: guilt cannot control a person’s life, and the only way that you can make up for a past mistake is by taking action in the present.

Like so many of us in our own lives, Felicity initially can’t take her own advice. She gets frustrated with Oliver when he suggests that she call in the team for back-up and is downright angry with him when he takes out Alena’s tech dealer and his men during their meeting. Exactly like Oliver in seasons past, when he believed he had to rectify his sins entirely on his own, Felicity thinks she alone must take down Cayden James and save the lives of millions. The regret Felicity experiences blinds her to any other possibilities; this is her mess, and she’ll clean it up by herself.

Eventually, though, Oliver breaks through Felicity’s walls, just like she has done for him so many times before, when he gives her a pep talk at her apartment. Calling himself “one of the world’s leading experts in guilt and regret” (truer words have never been spoken,Â ArrowÂ writers), Oliver explains to Felicity that he was never by himself when he was trying to make up for his actions in the past, never by himself when he was in the field, because she was always with him. Even when the two of them weren’t together romantically, her words still echoed in his head, proving yet again that their connection goes beyond a simple romance; it’s something purer, deeper, something rooted in friendship, trust, and understanding–it’s love.

The people we love most, those whose opinions we truly value above all others, have an indescribable impact on our lives; their words, actions, and overall presence remain with us even if they aren’t physically near us, even if we haven’t seen or talked to them in a very long time. Oliver has always felt Felicity’s influence ever since the two of them met back in Season 1, and her impact upon him has never lessened, not even following their break-up in Season 4 or during their most distant moments in Season 5. As Oliver tells her, Felicity has always been more important to him than her role as Overwatch; she hasn’t simply provided tech assistance while he’s been out in the field. She has helped him believe in the light when there was nothing but darkness, showed him that he could be a hero, not just a vigilante, and kept him trusting in himself as the Green Arrow, and in “Reversal,” Oliver Queen is there to remind Felicity Smoak that she should always believe in herself, just as she’s believed in him.

But this version of Oliver Queen, the one who would not only be able to give Felicity the advice she needs in tonight’s episode but also use the comms in the Arrowcave to help her navigate past James’s men, would not have existed a season or two ago. As he says to Felicity during their date at the beginning of the hour, the Oliver Queen of three years ago wasn’t ready for a relationship with her; that Oliver wasn’t mature or whole enough to accept Felicity’s love and give her his in return. His journey throughout Season 5, in which he was forced to confront his darkest demons and reveal them openly and honestly to Felicity, is what allows him to finally reach the point he does in “Reversal,” where he and Felicity are equals in the truest sense of the word, with how they care for and trust each other, with Oliver stepping back and being the person in the bunker while Felicity is out in the field. It proves how compatible the two of them and how both of them are willing to accept the other’s agency–they encourage independence and action instead of trying to suppress it. They value one another’s fortitude and strength and don’t undercut them under the guise of protection. Everything between them is based in trust, faith, and selflessness, the pillars of the best types of relationships, the foundations of love.

If there was any doubt in anyone’s mind that last week’s reunion between Oliver and Felicity was short-lived, or that it was too impulsive of Oliver to present her with a key to his apartment, “Reversal” should quiet those concerns. Oliver and Felicity have always had the strongest, deepest, and most powerful bond onÂ Arrow, and after everything they’ve gone through since their separation in Season 4, they’re finally ready to be the best versions of themselves that they can be, mature partners that work together, not alone. And hey, if that’s not true love (and great television), then I don’t know what is.

Felicity and Oliver switch roles when she’s confronted by her history with Helix in a clever, heartfelt episode of Arrow.